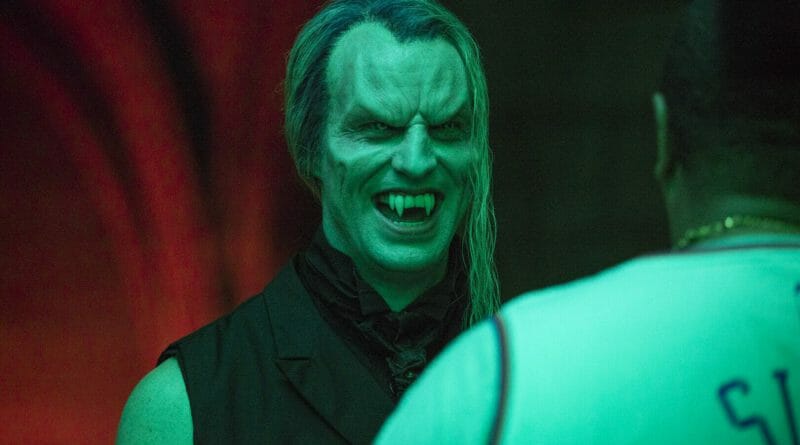 If you’re in the mood for Halloween than look no further! Netflix has put everyone, and I mean, EVERYONE, in the best of Halloween spirits this Spooky Season with hit original films like Vampires vs The Bronx and Hubie Halloween. We had the gracious opportunity to talk to Adam David Thompson, one of the stars of Netflix’s ‘Vampires vs The Bronx’ (he plays one of the vampires), to briefly discuss the film’s focus on gentrification in the Black and LatinX community, and the underlying theme of colonization.

Additionally, we briefly spoke about Thompson’s upcoming episodic series ‘A Teacher’. A story about a high school teacher and her sexual relationship with one of her students. The series highlights the cause and effects of said relationship and showcasing the dangers a relationship of this magnitude can have on the individuals involved and those around them.

We hope you all enjoy this interview! Happy Halloween!

First and foremost, how are you doing? How has this pandemic treated you?

Oh man, this whole thing has certainly flipped the whole world on its head. It has definitely been a struggle. I have two little ones (Ages 5 and 2) and parenting during a pandemic has had its challenges. BUT I typically travel so much for work that I am always coming and going. So being around my kids this much has been amazing. I am so grateful that we have remained healthy and safe. I know that a lot of people are losing loved ones, I think of them often and my heart just continues to break for them. I feel extremely lucky.

With nearly all of Hollywood getting back to normal, how much did the initial wave of production shutdowns affect your work?

Not a crazy amount actually. I am not currently on a long-running series, so there was no “typical” schedule for the pandemic to upend. I had some re-shoots scheduled and a few projects that were put on hold, but they were able to get it all figured out.

You have a long list of tv roles compared to your list of film roles. You’ve also done some voiceover work in the gaming industry. Have you found yourself having more doors opening as an actor in television rather than film or is that a personal career choice?

I consider myself a journeyman actor. So I go where the work takes me. Right now, there is so much amazing episodic work happening, so that is where I have found myself lately. I have also been doing a lot of voiceover work since the pandemic. I built a booth in my house, so being able to work from home has had its major advantages. I just have to make sure I schedule my bookings around nap times.

Today’s political climate has been the topic of discussion virtually everywhere you go. In Vampires vs. the Bronx, we find ourselves following a group of kids who are willing to do everything in their power to save their community in what is this film’s version of colonization. How do you personally feel about how this film highlights gentrification and the subtle touch of colonization?

That very storyline is what made me fall in love with the project and the director, (He is an Oz too!) Oz Rodriguez. Such an important issue to discuss told in an incredibly witty way. The response has been so wonderful. People are finding representation in the film for the first time. When I think about it, it brings tears to my eyes. I have become very emotional since becoming a father.

Now let’s have a little fun with the interview. Are you personally a fan of vampires?

Favorite Vampire movies? (I’m hoping you throw in ‘Interview With the Vampire’ in there)

I LOVE Interview With the Vampire. It is so representative of the time it was made. Cheesy, yet it takes itself VERY seriously. I mean come on. That cast?!  Watching it is like eating a giant bag of candy, without the stomach ache.

Are there any plans for a Vampire vs. The Bronx sequel?

That is a great question. I sure hope so. Not for my own benefit obviously. **SPOILER ALERT** I don’t exactly make it to the end of the movie without being turned into dust. But I would love to see where that group of characters goes next. Maybe Zombies vs The Bronx?

You have an upcoming project that will stream on FX on Hulu, ‘A Teacher’. What can you tell us about the series?

It is a show about a predatory relationship between a high school teacher and her student. The show is so well created/written/helmed by Hannah Fidell. Although the subject matter is exceptionally heavy, I enjoyed being on set with this group of artists very much.

I personally feel that these kinds of shows can be a great way to discuss a sensitive topic while highlighting the said problem and using the platform as a form of education. Can viewers expect to be further educated on the theme of the series?

Absolutely. It dives deeply into the collateral damage caused by these decisions and how devastating it is for victims of sexual assault. I play Claire’s (played by Kate Mara) brother Nate. He’s local law enforcement and is one of the many people that are affected. In addition to everything that we endeavor to recreate on the show, FX has created a site for people to go to if they are, or know someone that is, in a similar position. www.A-Teacher-Resources.com That site will direct you to a ton of different resources to help victims of sexual assault.

Adam, I want to thank you again for answering these questions for me. I look forward to your upcoming series and I hope to see more of you elsewhere in the near future!

Thanks again for having me. I appreciate such thoughtful questions. If you’d like to find me on social media my Instagram is @adamdavidthompson

You can catch Adam David Thompson in ‘Vampires vs The Bronx’ streaming now on Netflix. You can also catch him in the upcoming series ‘A Teacher’ streaming exclusively on FX on Hulu on November 10th.