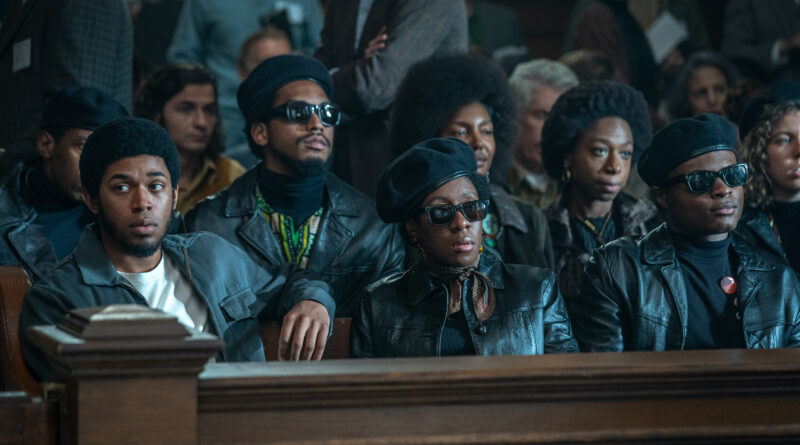 
Compellingly opportune, The Trial of the Chicago 7 not only sets out to teach but to entertain. With an all-star cast and Sorkin’s talent for storytelling, the courthouse drama’s wins pound out it’s subtle and insignificant losses.

With everything going on with the BLM movements, the insurrection at The Capitol, and the idea of a new president, The Trial of the Chicago 7 didn’t resonate as much as expected. I think this was partly due to Aaron Sorkin’s writing once again being too fast for its style and direction. Every scene was captured at surface level, meaning that the nuance that may have been in the script didn’t translate onto the screen.

I hate writing about films that sit in the middle of the spectrum between remarkable and mediocre. Thankfully, this film in no way merits a negative review. It has a lot to be proud of and a lot of exceptional qualities that made watching this courthouse epic fascinating.

Starting with the performances, this film’s cast was STACKED. You had talents like Mark Ryland giving a charged performance full of subtle character traits and values that explode in intensity when put under pressure. (The usual lawyer formula, cue Tom Cruise’s “I WANT THE TRUTH!” from Sorkin’s A Few Good Men.) You also had Sacha Baron Cohen who turns in an absolutely focused performance as Abbie Hoffman. There was a pearl of layered wisdom to Cohen’s performance, being the satirist he is. An authenticity and urgency to the inner workings of activism while upholding a genuine sense of humor.

You had these performances that maintained power and interest throughout the film, but it was in Yahya Abdul Matten II’s brief performance that made you forget the star power of Joseph Gordon Levitt and Eddie Redmayne. His frustration and anger immediately bled into our viewing experience, it was his performance that charged all of the real messages that Sorkin wanted to get across.

There’s a scene in the film where Abbie (Cohen) and Jerry (Strong) are leading a group of protesters to bail Tom (Redmayne) out of jail. In the large crowd of protesters, a woman waves an American flag as she sits on the shoulders of a fellow participant. Abbie is narrating the sequence and says “She’s waving an American flag, and this seems to really be bothering some frat brothers who’d come to town in the spirit of fraternity.”

When he said this, my mind immediately pictured what these guys were gonna say, what they were going to do, what they look like, I just knew. Sure enough, my intuition was correct. We see some neatly dressed white boys yell profanities and degrading phrases like “make me a sandwich” at the young woman. Jerry tells Abbie he’s going to take care of their disturbance before Abbie stops him and says, “They are not the enemy.” Jerry responds “In so many f*****g ways, they are.” I found it funny that frat guys have retained the same reputation as a bigoted group of white dudes since the ’60s.

The type of dudes that worship their racist Dads for showing them classic rock and conservative values that disregard the well being of minorities and women. Anywho… this scene was one of the many that displayed the parallels of the civil unrest in the ’60s and the same unrest in today’s America, exasperated by the powers that be. Sorkin explored the spectrum of liberalism with uncompromising activists like Abbie and Jerry paired with more obedient protest leaders like Tom and Rennie.

Both had a strong contempt for their government but approached activism with different mindsets. Sorkin kept that balance between his principle figures that resulted in a unified sentiment, that our voices for change are all the same, division amongst allies has no place in a revolution.

Sorkin’s direction gave way for some great performances and narrative choices but in the end it didn’t translate on screen as well as his previous films. Is this Sorkin’s fault? Does a film like The Trial of the Chicago 7 need that extra bit of introspective nuance? You have interesting people at the center of the film like Abbie Hoffman and Bobby Seale but only surface level understanding of personalities. It’s this flaw that led to the unshakeable biopic feel instead of the political and humanist drama.

The idea of a 2 hour courtroom drama is enough to make mass audiences groan, but with Sorkin’s flair for theatrics and his unique wit saves this film from being a lifeless recounting of the events of the 1968 riots. Its clever writing, coupled with timely themes, is matched with some fantastic performances from it’s array of hard hitters.

The Trial of the Chicago 7 is a sure bet for best picture at the Academy Awards with some possible nods for Aaron Sorkin for writing and directing, along with Sacha Baron Cohen and Yahya Abdul Mateen II for their supporting performances.