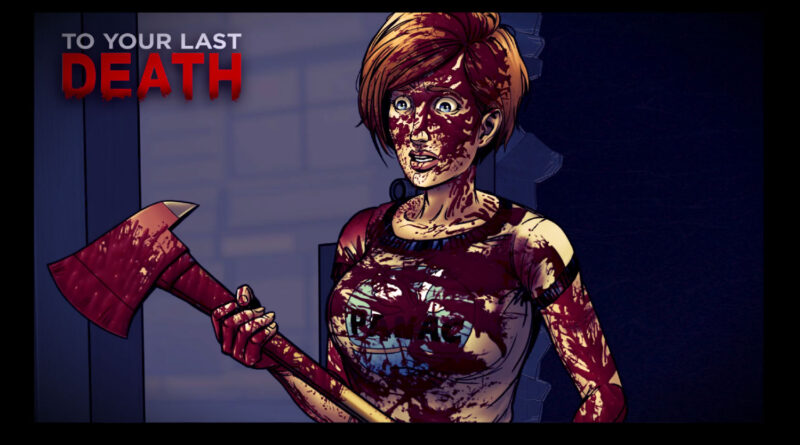 Following a wildly successful run on the global film festival circuit, having netted over two dozen awards and 60 nominations, Coverage Ink and Quiver Distribution have announced the Blu-ray release of Jason Axinn’s To Your Last Death.  The blood-splattered, timewarped animated family drama will be available nationwide October 6th on Blu-ray.  It is currently available on a number of digital and cable platforms, including iTunes, Amazon Video, Vudu, Comcast, Spectrum, and Cox.

Of her time in the recording booth, Baccarin shared, “What drew me to this project was how dark it was. This idea that we can be finger puppets, that somebody could be up there, wreaking chaos in our lives… Obviously, it’s a fantasy world, and it’s always fun to do something that’s completely unrealistic and at the same time plays with themes from reality.

I enjoyed this character because one could say she’s evil — she’s doing these terrible things — but she’s really just doing her job. It’s not about emotion, and it’s not about being mean or terrible to people. It’s about entertainment, and in a weird way, I thought it would be really fun to attempt vocally to do that.”

“If you can make people feel that they could die horribly, that’s scary. That’s close to the bone,” added Shatner.

To Your Last Death had its world premiere at the Arrow Video FrightFest in London, beginning a global tour of critical and audience acclaim.  The film has taken home over twenty awards to date including Best Film at the Northeast Film Festival Horror Fest and Horror Avenue Film Festival, Best Horror Film at Vidi Space Film Festival, Bloodstained Indie Film Fest and the Big Apple Film Festival, Best Supporting Actor (Wise), Best Villain and Best Writing at Hexploitation, Fearmaker of the Year at Spooky Empire, and Best Feature Screenplay and Best Sound at FilmQuest.

To Your Last Death was also nominated for Best Feature at the Pasadena International Film Festival in addition to Best Feature, Best Director, and Best First-time Filmmaker at HorrorHound.

To Your Last Death was produced by Coverage Ink Films and directed by Jason Axinn, from a script by Coverage Ink’s Tanya Klein and Jim Cirile.  Axinn produced alongside Cindi Rice and Paige Barnett.   Tanya Klein, James Cirile, and John Frank Rosenblum served as executive producers.

After emerging as the sole survivor in a deadly revenge game set up by her father to punish his children, Miriam receives an offer from a supernatural entity to go back in time and try again.  Now, Miriam must survive both her father’s blood lust and the Gamemaster’s ever-changing rules to save her siblings as she relives the worst night of her life.

Each Blu-ray purchase will come with a redemption code to over 4 hours of digital extras, including:  an audio commentary with director Jason Axinn, a Zoom panel with Axinn, star Dani Lennon and others, an interview with star William Shatner, interviews and behind the scenes with stars Morena Baccarin, Ray Wise, Bill Moseley, Dani Lennon and Florence Hartigan, a behind the scenes reel, comic con panels, an animation demo with lead animator Mohammad Ali Sharifpour, unused artwork and animation, crowdfunding highlights, featurettes on the development of the film, and more.