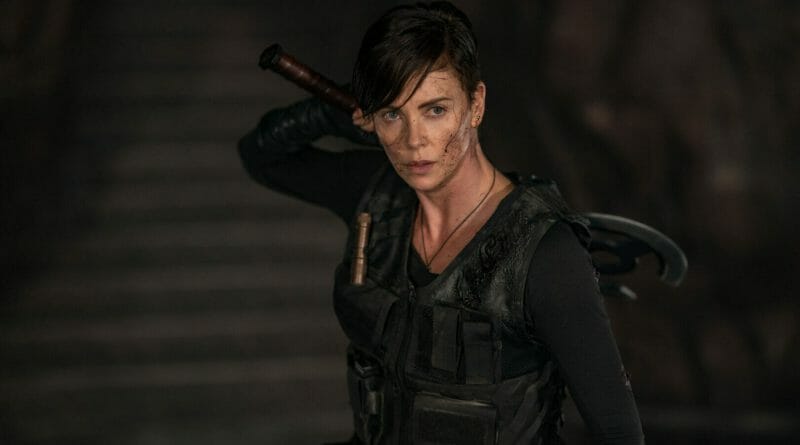 
The Old Guard Packs a Heavy Punch When It Comes To Action But Story-Driven Flick Falls Short Due To It’s Draining Pace; Something the Star-Studded Cast Couldn’t Even Save the Film From.

Directed by Gina Prince-Bythewood (Beyond the Lights, Cloak & Dagger) with the screenplay written by Greg Rucka. The Old Guard live-action film is based on the Image Comic of the same name, which is also written by Greg Rucka and illustrated by Leandro Fernandez. Follows centuries-old warriors/soldiers/mercenaries with the inability to die, that is, until time says otherwise.

When their mysterious powers are discovered during a failed rescue mission. These protectors of the world are now being hunted by Big Pharma CEO Merrick (Harry Melling) with the help of CIA Agent Copley (Chiwetel Ejiofor) who wants to use the immortality powers of these immortal warriors for-profit and the long-term benefit of humanity.

Now for the most part the idea and concept of the story are great. The film focuses on immortality and how being immortal and ultimately outliving everyone around you takes a mental and emotional toll on your psyche. And that idea is great but what ultimately kills the concept of it all is how the film is paced. It’s a very character-driven story but the film spends too much time creating questions rather than giving the viewer answers.

This is a problem that becomes more prominent when we are introduced to Nile. An American Marine in active duty stationed in Afghanistan. During a mission, she is killed and she is revealed to be a new immortal, who also has a connection to the other immortals (Nicky, Joe, Booker, and Andy). The connection between Nile and the others is never really established or rather explained. While they can sense each other, there’s no real explanation as to WHY they can sense each other, especially in the way they do. This leaves Nile in a dire sense of denial due to not being given the answers she’s looking for or wants to hear. As Andy says in the film, this is just how it is. It’s a bit lazy in my opinion but not much you can really do about it.

The only answers Nile really gets, and this comes from both Andy and Booker is that time steals everything from you when you’re an immortal and how being an immortal has a harmful effect on those around you. Which is one of the few things I really enjoyed about the story and the concept being that idea. Immortality isn’t all its cut out to be. It becomes a lonely and very depressing life. And while life is full of memories, even those memories fade with time.

Another issue I had with the film was that the military never went after Nile after Andy kidnapped her from her base and attacked two other soldiers. Thinking logically, and realistically, the military wouldn’t just allow that or just go on about their day without looking for a soldier who was 1. killed in action 2. came back to life and 3. kidnapped from her military base. That “plothole” is “filled” by saying that Copley has convinced the military to tell Nile’s family that she was killed in action. That’s the end of it.

Once again, a pretty lazy way of trying to fix something that needed fixing way earlier in the film. While also creating a new set of questions about the military and what they planned or plan on doing with the revelation of Niles being an immortal. Then again, why are they even immortal?

Another thing that I liked about the film was the focus on the extent of the lengths in how far Big Pharma will go to be at the very top of corporate medicine and the inhumane research they’re willing to do in order to create a new drug and gain a massive profit from it. While I enjoyed that, I was also turned off by the overly entitled, spoiled, bratty portrayal of Merrick. The film has many weak moments and Merrick is the film’s weakest link by far.

Speaking of weak moments, while the action of the film is enjoyable it does a very poor job at attempting to recreating those high impact John Wick action sequences and action cuts. The greatest form of flattery is imitation but not when it’s done like this. Very reminiscent of Extraction but Extraction did a better job at trying to recreate those high impact, fully played out fight sequences.

The film focuses on the gore of being shot at in the head or being filled with bullets or having your intestines blown out and seeing all of that heal up for simple shock value and to really show these individuals are immortal but not as immortal as they portray themselves to be.

Overall though, the movie is a typical popcorn flick which makes up for the slack of summer blockbuster were aren’t getting due to the current global pandemic. This film had an immense amount of potential but the bad pacing of the film takes you out of the film more than you would like to be. Nothing is really memorable and no one in this film is a real scene-stealer either. Not even the leading lady Charlize Theron.

The film does set up a potential sequel which I’m sure it will get. For the most part, majority of the reviews online have been rather good and it’s at the very top of Netflix’s Top 10 after a full day of release. Which in Netflix’s eyes is a good thing.

While I can praise Netflix and the rest of Hollywood for turning an eye to more indie and creator-own comics and bringing them into the forefront. A better job at adapting these niche comics has to be done. More so when you have the creator of the comic writing the screenplay for the live-action adaption. Especially when it’s coming from a critically acclaimed, Eisner-nominated/Eisener Award-winning writer like Greg Rucka.

For more film and tv news, reviews, trailers and updates, make sure to keep it locked right here at The Nerdy Basement. And while you’re here, please consider supporting us on Patreon. It’s an easy way of supporting us so we can keep proving you with your Nerdy News!