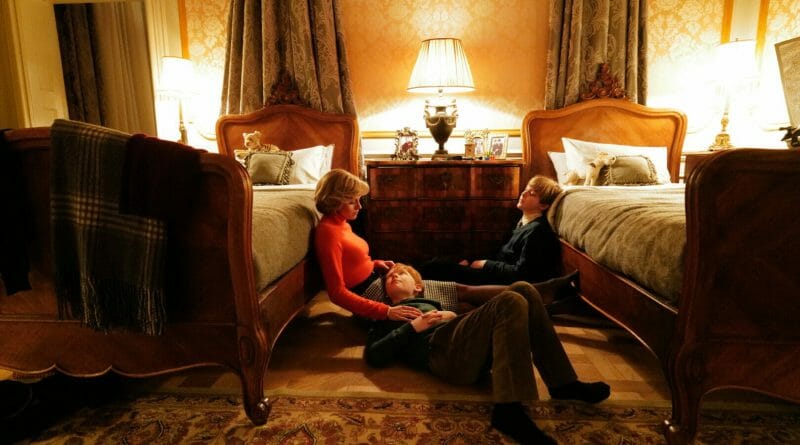 If you would’ve told me Bella and Edward from “Twilight” would be the most fascinating performers of their generation, I wouldn’t believe you. If you are looking for a formulaic and conventional biopic about Princess Diana, “Spencer” is not for you. The film takes place over the course of three days: Christmas Eve, Christmas Day, and Boxing Day. Writer Steven Knight warns us before the film begins: “A Fable From a True Tragedy.” What ensues is a dream-like allegory on emotional isolation. Princess Diana’s life story doesn’t need a biopic.

The late Princess’s story has been picked apart, fabricated, and loosely retold by every white liberal and southern conspiracy theorist. The beauty of “Spencer” is that Larraín and Wright sought to tell a contained story that encapsulated Diana’s life in the Royal Family as well as everything that tormented her. That’s not to say the film was filled with fatalistic metaphors and depressing fortitude in regards to her life. In fact, the film is quite uplifting.

Diana’s despair looms over the film from the beginning. We first find her late to the Royal Family Christmas gathering in her hometown where she grew up. Despite growing up here, she’s lost. Later in the film, we explore her childhood roots in a very brief fashion. We zoom through the brightest memories as if they’re almost forgotten and only little vignettes remain. After driving around for a while, two things are apparent: Home is no longer familiar and she’s avoiding the next three days with The Royal Family. Through cryptic dialogue and harsh interactions, we know that these are the final and painful last days of her and Prince Charles’ relationship. Wright’s script intelligently embeds exposition in a fashion where it’s almost non-existent and flows through the story.

It represents the restrictive and hush-hush way of conversing in The Royal Family. Some important aspects aren’t outwardly discussed or revealed in the same way the family avoids the elephants in the room. Instead, they are lightly alluded to. With Diana and Charles’ relationship, its disintegration is only alluded to through their two interactions with each other. Their relationship haunts the film’s narrative and manifests itself in Diana’s actions and desires. What took me by surprise was how psychological the film was. We are taken through Princess Diana’s intense anxiety, depression, and bulimia that she faced during this point in her life.

A family that’s cold towards her, a husband that no longer cares for her, and her rampant bulimia getting the best over her. The numerous conditions quickly build against her and manifest in reality breaks and moments of intense depression. I’ve said it once and I will say it again, Jonny Greenwood is the greatest composer working today. Every score he’s done feels so intricate and personalized for every film he’s done. For “Spencer” his score feels like the inside of Diana’s brain. It’s a constant whisper that looms over her story but never goes outside of that feeling. It’s not booming like Hans Zimmer in “Dune” but it’s much more haunting than anything I’ve heard this year.

Kristen Stewart simmers in the role of Diana and often explodes in emotionally charged drama. She faithfully portrays Diana as a shy yet charismatic presence in The Royal Family and she does it with the most soul I’ve ever seen Stewart display. She translates Diana’s despair from words on a script to screen with such nuance and conviction. Though her best acting is showcased through Diana’s dramatic mental breaks, I find her performance peaks in the scenes with the young Princes. As a Mother, Diana found solace in her children, and the love Stewart displayed for young Harry and William was absolutely moving. Larraín’s focus on Diana as a Mother, battling all of her problems made her situation all the more heartbreaking.

Slow and melancholic, “Spencer” is one of the most beautifully written scripts of the year. Wright and Larraín work together to create palpable and intense atmospheres within a house that’s turned against you. In the film, a character says the line that perfectly describes Diana’s situation. “F*ck doctors, what you need is love.” The entire film, we feel Diana’s isolation and the conditions feel heavy over the story. The consequences grow into intense moments of rash and harmful decisions that depict Diana’s isolation as what it is. Severe mental misery.

Wright does a fantastic job of drawing parallels and metaphors from different places to get into Diana’s head. Diana reads a book on Anne Boleyn, The wife of King Henry VIII who was beheaded so that he could be with his mistress. She sees visions of Anne that eventually save her from suicide. Diana coming home works adjacent to the Princess vying for her freedom from Charles and the family. The pearls given to her by Charles serve as a metaphor for the societal cage she’s trapped inside. The narrative and story are complex but incredibly effective in portraying Diana’s misery.

The more I think about the film, the more I feel the need to see it again. Diana’s fate feels insignificant because her memory was captured with such mastery and intimacy. Her declaration of freedom from Charles, her immense love for her children, her friendship with Maggie. All of these things make you forget the tragedy of her story because the highs are just so euphoric. Kristen Stewart shines in the role of Diana. Her most layered and masterful performance yet, the best of the year even. ‘Spencer’ makes for slow viewing but it’s Pablo Larraín’s and Steven Wright’s collaboration that makes the film a singular filmmaking experience.