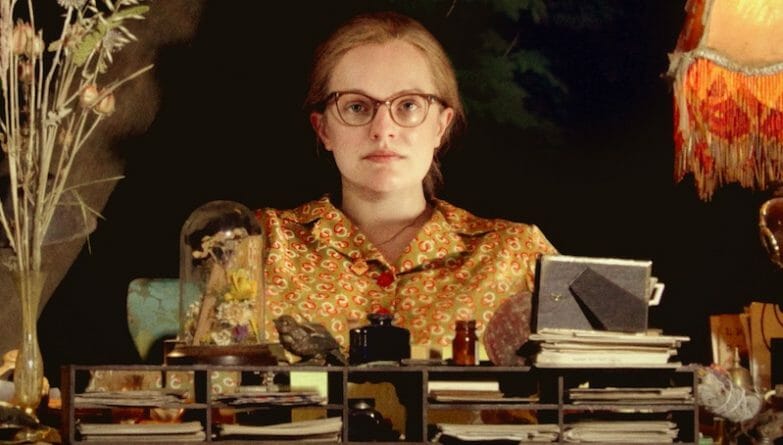 
“Shirley” is a fictional portrayal of renowned horror and mystery writer, Shirley Jackson, best known for her short story “The Lottery” and supernatural novel “The Haunting of Hill House”, which series adaptation can be seen on Netflix

The film was written by Sarah Gubbins and stars Elisabeth Moss (Shirley Jackson), Odessa Young (Rose), Michael Stuhlberg (Stanley Hyman, Shirley’s husband), and Logan Lerman (Fred, Rose’s husband). Directed by Josephine Decker, whose feature Madeline’s Madeline premiered at Sundance 2018 and was hailed as a “mind-scrambling masterpiece”. The same can be said for “Shirley”, as the film consistently keeps you second-guessing what is going on.

The film gives a depiction of the events that led the writer to create her 1951 novel “Hangsman”. Although fictional, the film feels very real and more like a biopic, as it contains some key elements from Shirley Jackson’s real life, like a glimpse at her open marriage agreement with her husband Stanley.

The film begins with newlyweds Rose and Fred on a train traveling to Shirley’s home, as Fred will be starting his new position as Stanley’s “teaching assistant” at Bennington College. While on the train, Rose is reading Shirley’s latest short story “Lottery”. Rose expresses to Fred that she found the story to be terrific. He, however, found it to be creepy. This difference in opinion of Shirley and her work, between Rose and Fred is maintained throughout the film with Rose’s increasing admiration for Shirley, and Fred not understanding Rose and Shirley’s relationship at all.

From first glance, Shirley is an awkward, dark, and rudely outspoken outcast. She has a very off-putting demeanor. Although people seem to be terrified of her and her thoughts, Rose from the beginning seems to gravitate to her. In their very first interaction, Rose approaches Shirley to tell her that “Lottery” made her feel “thrillingly horrible”. Shirley seemed a bit taken aback by Rose’s remark, as though she was not expecting Rose to have such an intellectual opinion. Rose, who could have been an academic herself, instead tends to yield to the demands of her husband Fred’s career goals to be a college professor.

Stanley, Shirley’s husband, is a bit odd. He seems to care about Shirley; however, he also treats her as if she is unable to care for herself. Throughout the film, it is hard to tell what is going on with their relationship. At some points, the two seem like conspirators in a ploy against Rose and Fred. Then other times, it seems as though Shirley and Rose are becoming close friends who are relying on each other for support.

The film showcases levels of codependency between the couples in the form of ego-boosting and comfortability. There does not seem to be much love in both relationships, although we see Fred and Rose have multiple intimate moments. Their relationship and marriage overall appear to be more circumstantial due to Rose getting pregnant; although that is never explicitly stated in the film. Shirley’s remarks toward the couple seem to imply that is the case. Leading Rose to become a stay at home wife, while Fred pursues his dreams and provides for them.

The feeling of being invisible is referenced a lot in the film with Shirley deciding to write a novel about a missing girl from Bennington college.  While Shirley is trying to figure out how and why the girl had gone missing, Rose suggests that “maybe disappearing was the only way anyone would notice her”. Later in the film, Shirley explaining the premise of the novel says the novel is about “lonely girls who can not make the world see them”. Both women are somewhat disregarded by their husbands.

Fred is completely focused on his work and comes home at all hours of the night, usually appearing to be intoxicated. Stanley seems to only be with Shirley because she is a brilliant writer; he openly has relationships with other women and tells them Shirley would not be able to survive without him.

Towards the end of the film, Shirley and Rose find their voice and visibility in a sense. After months of writing and investigating with Rose, Shirley is confident that she can finish the novel and share the manuscript with Stanley. When leaving Shirley’s home, Rose tells Fred that things are going to be different, implying she will no longer just be a housewife. In their last scene together, Shirley takes Rose to where the missing girl disappeared; in the scene, we see the two women have what looks like a freeing/empowering moment.

Overall, the film was written and directed very well. The different dream sequences throughout the film were brilliantly shot and really added great context. The whole cast did a good job of evoking emotions from the viewer, whether anger, amusement, or confusion. The film leaves a lot of room for interpretation, as you are never sure what each character’s true intentions are.

For more film reviews make sure to keep it locked right here at The Nerdy Basement Movies. And while you’re here, consider supporting us on Patreon. It’s a simple way of supporting us so we can keep on providing you with your Nerdy News!