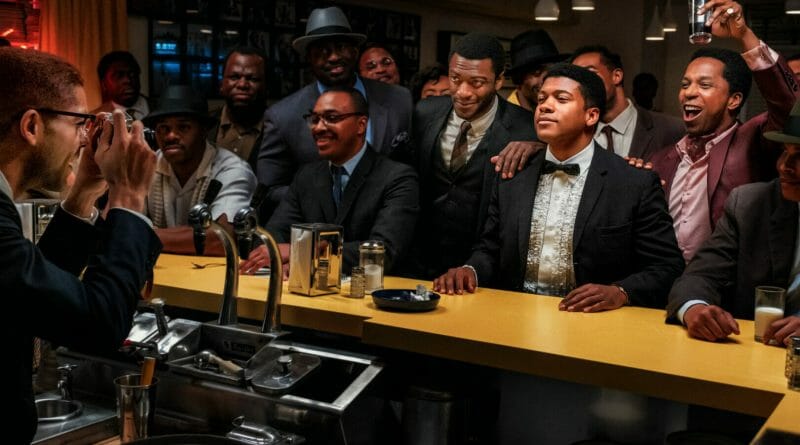 One Night In Miami Review: Regina King Crafts a Timely Period Piece With Such Artistry and Intricacy In Her Directorial Debut


One Night In Miami is enlightening and charming as its principal figures, Regina King crafts a timely period piece with such artistry and intricacy.

Four fantastic leads, a stellar script that separates itself from its original medium, and a visionary directorial debut that helms it all together. ONIM wins in a number of ways but the opportune themes and messages ring louder in the modern-day, making it more than just a period piece. In the aftermath of a year of division and a blatant attack on democracy, One Night In Miami shines in the idea that America was never great for so many of its residents.

Whether you see it or refuse to open your eyes to it, America showed their true colors last week. In a post 1/6/2021 America, two things were made painfully apparent. 1.) There is a CLEAR bias when it comes to the well being of white Americans over minorities and POC. It had to take a violent act of domestic terrorism for idiots like Lindsay Graham to see the disparate conduct towards BLM protests and white supremacists. 2.) This attack was viciously instigated by, I’m embarrassed to say, our President.

After the attack had subsided and clean up was underway, I had a conversation with someone about the severity of the event. We expressed our anger, our sadness that behavior like this represents a great part of our country, but most importantly our growing contempt for America. 9/11 happened and it bred nationwide islamophobia. The Central Park 5 were falsely accused of the assault of a white woman, the kids were berated with death threats and imprisoned for 6-13 years. White supremacists facilitate an attack on The Capitol, they do their damage and receive praise from the executives and lawmakers of this country.

In today’s day and age, it’s truly tiring to uphold the love for our country that’s been instilled in us since grade school. The past 4 years have been enlightening for the growing generation watching on. We’re taught in history class about America’s greatest achievements. We defeated the great tyrant in our origin days, we lent our help to the allies to defeat Hitler, yet we can’t look inward and defeat our own villains. No lessons on systemic racism, no lessons on police brutality, no mention that America’s attitudes towards race never diminished after segregation was abolished.

Our country’s gilded history bleeds into so many films and tv with inflated messages on inequality and racism (*cough* Green Book). One Night In Miami doesn’t lean on white saviors, it isn’t scared of its own subject matter, and most importantly, it’s philosophies ring true 56 years after it’s time period. The film gathers Cassius Clay, Malcolm X, Sam Cooke, and Jim Brown for a night of celebration and riveting discourse. Seeing these characters interact was fascinating. The story itself is fictional, but writer Kemp Powers injects these figures with such realism and historical accuracy that ONIM feels as compelling as a documentary.

Based on the play, also penned by Powers, the film holds a strong theatre essence, emphasized with powerful performances and compelling monologues. Regina King’s directorial debut only uplifted Powers’ work. King’s lens acted as a spotlight, however, where a spotlight can only focus on one thing at a time, King’s lens was exploratory. Every nuance in each figure’s ego and personality was captured with such intimacy, subtly conveying deep admiration. With an immensely talented performer like King behind the camera, the performances would inevitably become a focal point for everything that makes the film special.

Starting with Leslie Odom Jr., his portrayal of Sam Cooke was unbelievably authentic. He sounded like him, looked like him, and even sang like him. It was absolutely uncanny. Cooke had this unique voice that carried such emotion and passion, so the fact that Odom didn’t utilize a voice double is mind-blowing. Kingsley Ben-Adir, who played Malcolm X, turned in an emotionally charged performance that was impactful. Having been taught that Malcolm solely preached violence, Ben-Adir’s turn was profoundly empathetic. He conveyed a sense of urgency that his discourses resulted in either disagreements or moments of raw emotion.

Ben-Adir was absolutely moving and a profound force to watch. Aldis Hodge was just so damn cool. His mannerisms, his way of speaking, Hodge’s depiction of Jim Brown was full of inherent charisma that made him engaging to watch. Finally, Eli Goree was full of this child-like energy that’s expected from a 22-year-old champion. It was a certain innocence in Goree’s performance that felt joyous compared to the more seasoned figures that have experienced troublesome hardships.

Having a film like ONIM close out with the words “Directed By Regina King” felt empowering. A film that’s focused on character and acting brought together with King’s eye for performance and Powers’ passion for writing resulted in a film with heightened cultural resonance. The film serves as a reminder that America was never great for so many people throughout our history. In light of the recent events at Washington DC, One Night In Miami is the film 2021 needs.