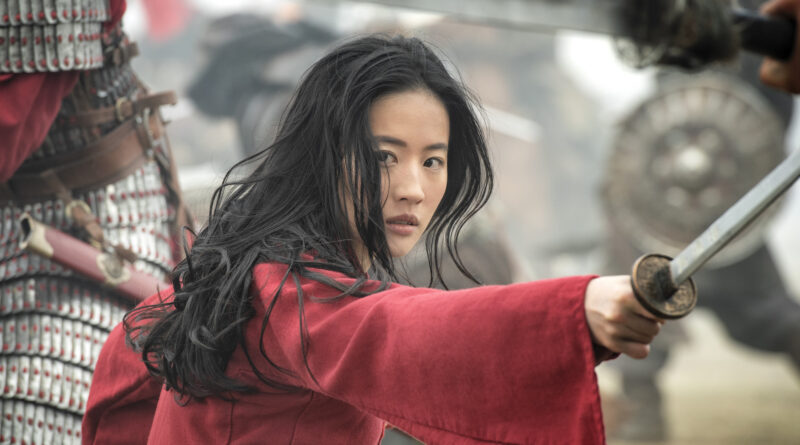 
Mulan visually captivates you from start to finish but even it’s beautiful scenery and cinematography are not enough to send this film soaring far and beyond!

If there’s anything Mulan doesn’t do is stay loyal, brave, and true to its original animated film. Starring Yifei Liu as Mulan, Donnie Yen as Commander Tung, Tzi Ma as Zhou, Jason Scott Lee as Böri Khan, Yoson An as Honghui, Ron Yuan as Sergeant Qiang, and Gong Li as Xianniang. Mulan has a well enough rounded cast to make this film successful but its dull and emotionless script and emotionless delivery from its actors becomes the film’s biggest detriment outside of removing key moments and key characters from the original 1998 animated film.

Mulan just like the original animated film is a coming of age story which follows Fa Mulan or in this case, Hua Mulan, as she poses as a man in order to take her father’s place as he is called to join the Chinese Imperial Army. Unlike the original film though, Mulan is a special girl right from the start. Having a keen sense of mastery of her Chi from a young age. Now, this isn’t to say she wasn’t special in the original, she just wasn’t one with the force in the original as she was in this live-action remake.

Which also comes at the sacrifice of not showcasing how much of a smart woman Mulan truly is. Everything she accomplishes in the film just rests on her willpower and control of her Chi. And while that’s great and all, there’s not much Mulan has to overcome in this live-action film as she does in the original. Mostly due to everything resting on her control of her Chi.

As I mentioned above and mentioned on Twitter, Mulan is visually captivating and is a beautiful film to see. From set designs and costume designs, there’s always something on the screen that will catch your eye and will make you appreciate the traditional Chinese garbs and Chinese setting. From the multicolored skies, bamboo jungles, and gold dragons; if fans are to leave with any sort of appreciation for this version of the film is the beautiful cinematography and the attention to detail in order to bring this film to life.

On the flip side, that’s where that stops. The film ops to not include any of the musical moments from the original film and in my opinion, it was a costly decision. A mistake even. One thing we’ve come to love and enjoy about Disney films is their musical numbers. It’s a staple of Disney animated films and it’s something that avid Disney fans look forward to when watching a new Disney film or rewatching an all-time classic. Recent live-action remake of Disney classics like Beauty and the Beast, The Lion King, and Aladdin all stuck to their core concepts and brought forth these musical numbers to their live-action counterparts.

While these musical numbers might have not fit with the themes and tone of Mulan’s live-action film. The subtle nods to those classic songs in this film’s composition are not quite enough and do not deliver the emotional beats you would expect to feel when hearing Mulan or her Imperial Commanders commence their musical numbers.

Another costly mistake for this film was replacing Mushu with an unnamed and silent guardian, the Phoenix. It’s almost redundant to have included the Phoenix as her guardian when the Phoenix doesn’t guide her as much as Mushu does in the animated film. Other than visual appeal, cause the Phoenix does indeed look majestic and beautiful. I feel like the Phoenix didn’t serve much purpose in the film other than for thematic sentiments. Something I called as soon as the film started.

The emphasis on the Phoenix rising from the fire anew was something I knew would come into play for Mulan as some point in the film and it did towards the end of the film when she is trying to save The Emperor (Jet Li) and he tells her to rise like the Phoenix. It was laughable and utterly predictable. Despite the beautiful shot we got of Mulan rising and the Phoenix rising behind her with her wings spread to really drive the point home.

When it comes to the Phoenix and Mushu, seeing how much dragons mean to the Chinese culture and how much dragons are scattered around the world of Mulan in this film. I would’ve preferred a silent version of Mushu since his comedic timing didn’t fit with how serious and realistic the film wanted to take itself.

If there’s any chance I did like about this film was making Shang-Yu or in this case Bori Khan’s hawk into a witch/sorceress.

Ultimately what it all boils down to is that Mulan has/had everything in its favor to truly become one of Disney’s best live-action remakes and it fails in doing so. All at the cost of wanting to be realistic, overly serious, and very very grounded. Mulan visually captivates you from start to finish but even it’s beautiful scenery and cinematography are not enough to send this film soaring far and beyond! Failing at staying loyal, brave, and true to its source material.