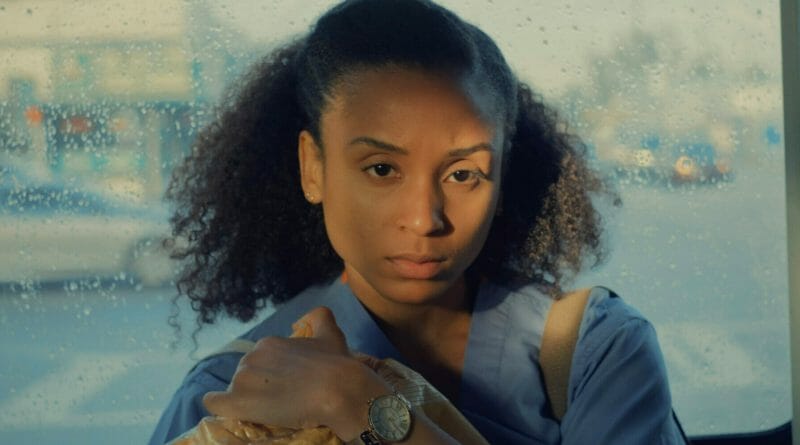 Welcome to the virtual SXSW 2021 film festival — which obviously can’t be held in person due to the ever-present pandemic we haven’t quite shaken ourselves free of. The Nerdy Basement was given a chance to view one of the films in the Narrative Spotlight category, Ludi.

When asked what’s the American Dream, most people give all similar answers: that no matter where you come from, success can be achieved by anyone. People spend their lives chasing this ideal life filled with whatever their vision of success is. In said pursuit, many times we’re presented with the stark reality of these dreams: it takes a lot of work to get there. With the frame of the immigrant’s experience, that workload is doubled.

Edson Jean leaves his acting chops behind as he tries his hand at directing his first feature film, Ludi, an intimate portrait of a Haitian immigrant working herself to the bone to support her family back in Haiti and using what’s left of the earnings for herself.

The film stars Shein Mompremeier, who offers us a sincere portrayal of Ludi, an overworked nurse taking all the extra shifts she can so she can provide for herself and her family back home. I found her performance of a good-natured young woman to be convincing and frustrating as a viewer due to the fact she was taken advantage of due to her dedication to doing good work.

To keep in touch with her family, Ludi communicates through a cassette player that they ship back and forth in an archaic yet truly precious way to have conversations. These messages sent from a distant land feel like prophetic messages that motivate Ludi in her pursuit of a better life in America. Despite the fact her family has phones, minutes on a phone plan are far more expensive and limiting than a cassette player, the same way the American Dream is limited to those who can afford to chase it.

Despite what her friends and family say regarding her starting a family, Ludi remarks “this is not a country to raise babies.” Ludi still does what she can to nature her niece who is requesting money for a dress for her graduation, inspiring Ludi to work harder in order to help.

From her landlord, her bus driver, or her coworkers, Ludi is constantly being manipulated to do extra favors for these people due to the fact she is hardworking and good-natured. The bus driver hands her misguided and patriarchal advice to “find a man” and start her life, indicating that she isn’t complete without that. I found myself wishing I could jump in and defend her when her sleazy coworker, Evans, was trying to blackmail this girl because of her desire to work his shift.

In this narrative, the dedication to her work overpowers any desire for anything else in her life. To feel somewhat close to home, living in Little Haiti provides some comfort, “you can hear the language everywhere, in every corner.” Yet, even those she can call for help only help her due to the favors she’s able to provide.

There’s a moment in the film after Ludi’s bus driver leaves her behind where she has to wait again, sitting atop an empty shopping cart with a group of locals surrounding her. I found that image to be powerful, the idea of an empty shopping cart representing the empty search for success in a system designed to make minorities struggle.

Her landlord, a Latina who represents the immigrant story in a different light, manipulates Ludi to do small favors for her. She offers her work in a way to seem friendly however she’s only taking advantage of Ludi’s strong desire to earn more. She technically cannot work for private clients so she would be taking a huge risk to earn any extra income. When Ludi finally decides to take the extra gig, her landlord gives her the address in Spanish, automatically expecting her to understand it, and Ludi writes down the address quickly in order to avoid her coworkers catching her.

We reach the point in the film where Ludi goes to see her private client, an elderly and irritable man named George who ends up teaching Ludi more about herself than anyone before. The two start at odds with each other, George ultimately confused as to the reason this nurse was sent to him despite how capable he feels to live as an individual.

Over time and lots of struggle, Ludi and George break down and open up to each other through the lens of their individual struggle. Both people receive an opportunity to look at how they’ve been in their lives and make sure to not make those mistakes moving forward. George, an embittered old man at the end of his days, expresses remorse and living his life so consumed by work he neglected his relationship with his wife and family.

That idea directly connects to Ludi’s struggle as she’s using all her time to work hard to only skim through life and struggle indefinitely. In a random twist of fate, Ludi discovers that she was at the wrong address this whole time, however gracefully accepts her mistakes and takes the valuable lessons from the experience with her.

In a closing message to her sister and niece, Ludi expresses her sadness that she can’t see her family since her vacation days “ran out before she could use them.” The idea that your opportunities will disappear if you don’t grab them is the sick, sad truth of the consumerist way of living in America. You can chase the American Dream, however, it’s never without a cost. The fact that working hard all these hours to provide for your family and now you can’t go see them since you missed your chance to take a vacation is a cruel reality that so many Americans, immigrants especially, have to deal with.

Overall this film was a good character study of the experience of an immigrant moving to the United States in search of a “better life”. Edson Jean is a Miami native, so this film felt like an ode to the overlooked lives that exist within the ecosystem of small American cities. This film also points a finger at the many people out there who are missing out on living their lives because they’ve been taught to work hard and the results will follow. The idea that you have to work yourself to your limits to be successful is a myth I hope we’re all slowly waking ourselves up from.