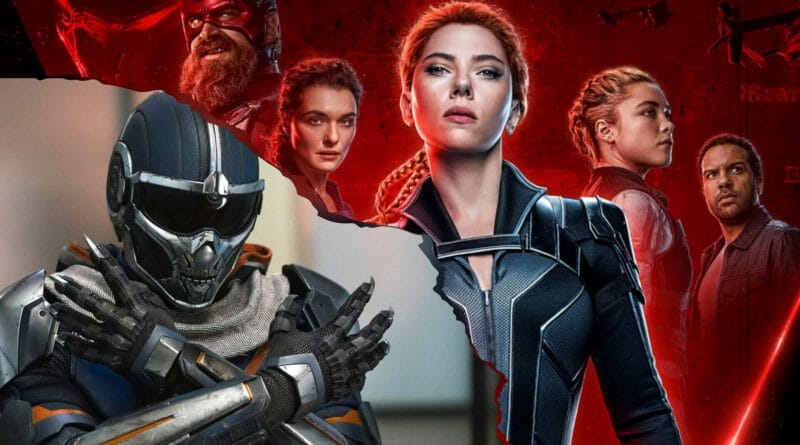 Black Widow has been a mixed bag when it comes to how fans feel about the film. The biggest takeaway from the film and something that fans have not let go of as of yet has been the heavy deviation of the film’s minor antagonist, Taskmaster. As seen in the film, Taskmaster’s live-action debut was not the character we have come to love and enjoy from Marvel Comics, whose real name is Anthony Masters or Tony Masters.

In addition to Tony Masters not being the man behind the mask, Antonia Dreykov, the daughter of the Red Room leader General Dreykov, her photographic reflexes were not a superpower, but instead, an ability that was purely tech-based via the implanted chip in the back of her neck which is attached to her cerebellum and the HUD in her helmet, which instantly allows her to analyze, predict and copy the moves of anyone she watches.

Why Was Taskmaster Changed From Tony Masters to Antonia Dreykov?

In a recent interview with the Phase Zero Podcast, Black Widow writer Eric Pearson revealed why and how Taskmaster was changed from Tony Masters to Antonia Dreykov and in the process revealed that Anthony Masters was indeed a part of the film in the early stages.

I made the mistake of looking in direct message requests, and someone said, ‘I don’t mean to be out of line, but Taskmaster was the biggest betrayal of my life.’ And I was just like, I got mad for a second and then I was like, well you’ve had a pretty good life then. If that’s the worst thing that’s ever happened to you, then you should be psyched, cause like, you know. Someone in a movie wasn’t who you wanted them to be?”

No, I mean, it was more discussion of how do we make– cause Taskmaster was going to be involved and there was versions before I came that was Tony Masters. And it felt, I kept thinking, I was like, can this guy somehow not just be a goon, like, I don’t want, like. Cause Dreykov and the Red Room is the thing that’s tied into Natasha personally and her past.

A giant, nefarious, as we learn, spy station that is circling the globe in the atmosphere. So why is there this guy, like why would this guy be an arm of them? That’s what I kept trying to be like, what is, I, trust me, I looked very, very far for like, how do we get this Tony Masters guy to believably be an agent of the Red Room.”

When asked about the reasoning about making Taskmaster Dreykov’s daughter, Pearson stated:

“It just kind of leaned more towards other things were making sense, other parts of the puzzle were adding up. Oh, they stole from Ohio the cellular blueprint of the basal ganglia, the way to deconstruct free will. Okay, they’ve got the ability to build, rebuild the mind. Oh, Dreykov’s daughter, she used, Natasha used her as bait, blew her up. Well, what if she didn’t survive and this guy who has, you know, a lot of brain science, is that a good way to find these photographic reflexes? It just seemed to make more sense.”

What Happened To Tony Stark’s Cameo?

When fans were told that Black Widow would be taking place after the events of Captain America: Civil War and before the events of Avengers: Infinity War, seeing where Natasha Romanoff left off with her Avengers teammates. Fans were eager to see if the likes of Robert Downey Jr. would make his MCU return in the form of a short cameo. While there were reports about RDJ’s MCU return post Avengers: Endgame, nothing was outright confirmed…until now.

During the same interview with Phase Zero Podcast, Eric Pearson confirmed that an earlier version of the Black Widow script did in fact feature a Tony Stark cameo. “I do remember now that one version of the script, prior to me, literally had written into it the end moment of Civil War with Tony and Natasha,” said Pearson. The scene would’ve been set after the big airport battle at the start of the film’s third act which featured an exchange between Stark and Romanoff in which he tells her  “I’m not the one who needs to watch their back.”

Pearson went on to add some more insight about Tony Stark’s cameo stating that the scene didn’t really add anything so it wouldn’t have been worth including in the film. “That’s the only time I saw Tony Stark’s name in it, and it was just kind of a flag-planted reminder — like, ‘Hey, we’re right at the end of Civil War,'”. The alternative ended up being including William Hurt’s Thunderbolt Ross cameo which sees him hunting down Black Widow after breaking the Sokovia Accords in Civil War. Pearson, along with Black Widow director Cate Shortland and Marvel Studios head Kevin Feige, also agreed that this would be the best decision for the film.

“Initially, there was discussions about everything, about all of the different characters,” Shortland said in an interview with Total Film. “What we decided was, and I think Kevin was really great, he said, ‘She doesn’t need the boys.’ We didn’t want it to feel like she needs the support. We want her to stand alone. And she does.”

Black Widow is playing in theaters and streaming exclusively on Disney+.