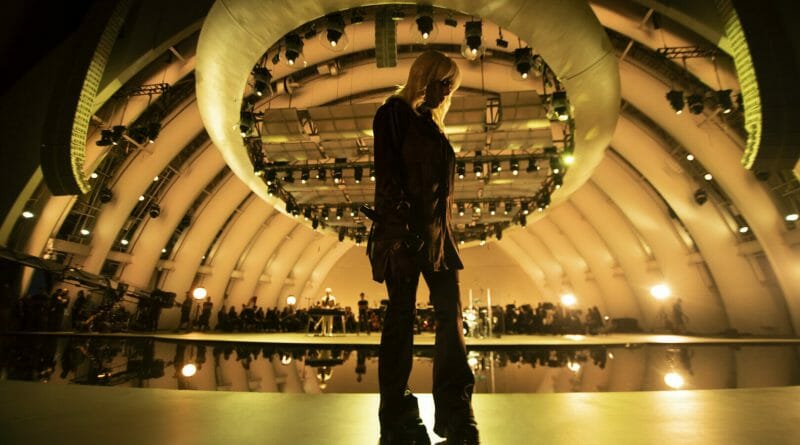 Billie Eilish in “Happier Than Ever: A Love Letter To Los Angeles” Review


This weekend I had the pleasure to be soothed by Billie Eilish in “Happier Than Ever: A Love Letter to Los Angeles”. I was never a devoted listener to her music so once again I went into this movie free of bias. The only song of hers I have on my playlist is “Bury A Friend” and the essence of it is almost dark and demonic. And I had not even seen trailers for this movie, only to be surprised to watch an hour-long concert of a more mature, ethereal mood music. And it was interesting that whenever she was not singing or talking, she was her animated self and the animation seemed like it came from the RWBY series.

Her first song, “Getting Older” was introduced to us as an animated Billie Eilish came onto the screen. But behind the song, there’s always a deeper meaning to the words and sound. Eilish revealed that the song is a “very revealing song talking about things that I only at the time had just felt I realized about myself and felt insecure about and wanted to talk about. I don’t know, I think that that happens a lot and it should be completely welcomed, is realizing stuff years later. You sometimes don’t realize what’s going on around you until a really long time later or realize what you feel until years later.” She talks about growing older, opens up about her love life, enjoys her profession, but also about the toxicity of the music industry.

The second song “I Didn’t Change My Number” was an obvious ode to her breakup with her boyfriend and her telling him he has no more of her to take and it’s a great lesson to cut toxic people from your life. This would actually be a great song to listen to after you’ve had the time to heal from a breakup and you’re confident you want nothing to do with your ex. The words say “I’m out of sympathy for you” and she has made it a point to love herself and be in a relationship with herself to be happy and protect that happiness.

Billie Eilish brought in the LA Philharmonics Orchestra to help her perform “Billie Bossa Nova”. It’s making fun of a story where Billie and Finneas (her brother) made up that Billie was dating someone special. It’s a great song and it also comes to show that some fans go too far wanting to hear about some celebrity gossip. Listening to it, it showed me that it was a real banger that gained a new listener to the song – me.

“My Future” was the fourth song in the album and was the most personal song to the young singer. It tells that the future “feels uncertain and crazy” but she was hopeful and excited, filled with self-reflection and growth. Her music has definitely grown from dark to mature. Showing that she has learned through self-love before she welcomes anybody else into her life. And the fact that the majority of her audience is a younger crowd, it’s truly a healthy message. A rather slow song, but on purpose for the message to have time to sink in and make an impact on the listener.

A trippy one, “Oxytocin” opens with red lights and cameras surrounding Billie Eilish as she sings. In the medical field, oxytocin is known as the natural “love hormone”. It suggests a secret love affair that she wants to keep safe from public knowledge, further asking if this is even a healthy one at the start. But oddly enough there is no specification as to whom the secret lover she is referring to. “GOLDWING” is probably my favorite in the album because it features a young girl’s choir, which was the one Billie Eilish grew up in, and it adds a hint of awe to her set. Representing the “pure” girls – free from trauma and exploitation. I could put this song on my aux cord on repeat and love the feel of the song.

“Lost Cause” sounded like leaving behind a no-good ex that thinks they are all that and a cup of sugar. Acting like they are bigger and badder than they really are but are really no good. Basically being an anthem for young women to leave that no-good useless ex and move on to better people. Halfway through her concert she stops and talks a little bit about how her love for Los Angeles has grown and how much she appreciated growing up there. This leads to “Halley’s Comet” telling about coming back down to earth after falling hard in love with someone. It’s one of those “the truth hurts” songs.

“Not My Responsibility” kind of had a James Bond look to it; her animated self walking through red and black tunnels. But although the song is rather bleak and grim, it has a powerful message to her critics. It’s not her responsibility to conform to other people’s standards of beauty, She has her own style and she truly is rocking her own look.

“Overheated” is the middle finger to the news over-telling the tiresome story of actors and how they look. It’s a nice self pat on the back to accepting yourself just as you are. It’s simple enough for anyone to find favor with. Social media really needs to let go of this fascination with celebrities because guess what? They are people too. A rather grim topic to sing about in “Everybody Dies”, Billie Eilish turns the sad conversation of loss into a strength. She expresses her feelings and to live life while you can and enjoy it. The song is light and almost gives off the feeling of a lullaby.

“Your Power” is a beautiful one because it calls out people who abuse their power. Mainly targeting older men towards young girls in the entertainment industry. Billie Eilish says it was one of her favorite songs to write because she felt very vulnerable putting it out there. A non-disclosure agreement or “NDA” as the song is properly titled, goes into her lack of privacy as a celebrity. As a celebrity people are stalking you, photographing you, and basically place you under a microscope. Once again she’s giving the middle finger to social media trying to go through her life with a fine-tooth comb and it was truly aggravating.

“I’m not your friend or anything, damn, you think that you’re the man” from “Therefore I Am”, caught my attention real quick and her middle finger is up once again to the body shamers. You are no one important, so why should your opinions matter to me, in fact, why do you tell me your opinions when you are no one important to me. The song was a hard hitter and loved being strong.

“Happier Than Ever” shows her animated self approach her real self as she performed this anthem for the young singer being honest about her relationship. She calls out some of the discussions, nonsense, and BS that she dealt with as a kid in an abusive relationship. She took a pause before the final song “Male Fantasy” to be aware of where she was performing. She thanked the viewers who watched and admitted what a dream come true it was to perform at the Hollywood Bowl.

In the soft song, she wonders why she is watching porn and overanalyzes the woman and how they pretend to be “satisfied and docile” after the fact. Then she moves on to talk about a female relationship and how it crumbled and even admits continued feelings for the unnamed person. Overall, I was genuinely surprised at how much Billie Eilish has matured and grown as a singer and young woman. Learning about her through her music was an experience that could only be described as uplifting for women who are feeling the same way and need some encouragement. I will be listening to more of her music, especially “Therefore I Am”.

Billie Eilish in “Happier Than Ever: A Love Letter To Los Angeles” is directed by Patrick Osborne and Robert Rodriguez and is streaming now, exclusively on Disney Plus.