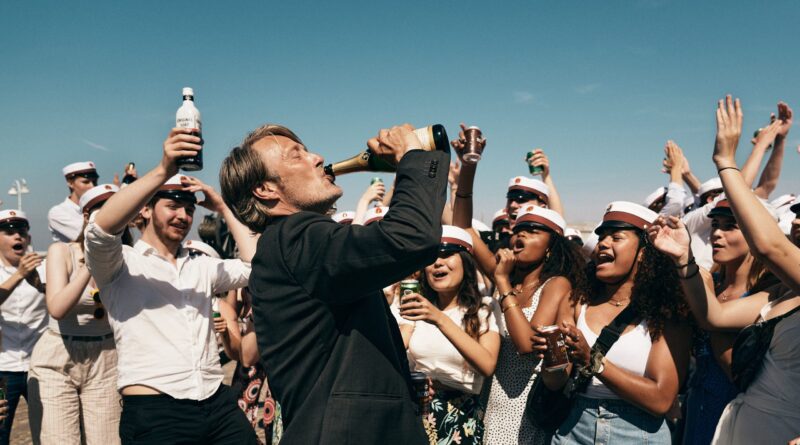 Another Round: Denmark’s Officially Selected Submission To The Oscars Might Just Win Big!


Another Round is one of those films that captures life with the utmost intimacy and honesty.

Another Round isn’t a mid-life crisis movie, this isn’t a down-on-his-luck movie. This is a film that’s expressive of joy and the idea that when there are highs in life, they are HIGH. Mads Mikkelson is just magnetic and fantastically human.

There’s those Hallmark films about the dudes in a rut adopting a new ideology or new outlook on life and we watch them grow to love life after they spontaneously buy a ticket to Mumbai or meet a loose partner to offset their life worries. Those ones feel so disconnected from their reflections of reality, it’s always so cheesy, it’s always a misfire.

Another Round enters the race under the guise they’re another “live your life” flick and turns each and every trope onto their head. This is a display of intense humanist realism; in the characters, their motivations, the consequences, and most of all, the depiction of actualized joy.

The basic premise of the film follows four school teachers who seek to improve their social, family, and professional lives by maintaining a certain level of alcohol in their blood. In light of their steady approach to mid-life, the four men explore the ramifications of constant intoxication. They are taken through the highs of their experiment but, many a time, are brought to crashing realities that take them to the edge.

Writer and director, Thomas Vinterberg, takes us through what the cost of joy is. Is its spontaneity? Is it religion? Is it the connection and bonds we have? Vinterberg’s answer is to live in the now. We are introduced to Martin who’s stuck in a point of plateaued mundaneness. Dwelling on his failing marriage, his dead-end teaching job, Martin learns to live and love life for what it is as their experiment progresses. Vinterberg puts us in every scene by utilizing a handheld camera to engage in every scene, making the film 110% more intimate.

Though Martin is somewhat the center of the film, we are given different examples of discontent in one’s life; Martin’s lies in his marriage, Tommy’s is the stark contrast between intoxication and sobriety, Nikolaj’s is the frustrations of family life, and Peter is the mundanity of his career. Every character is given well fleshed out narrative arcs that by the end of the film everything feels covered.

The performances in this film are incredibly human and convey real exasperated pain along with genuine ecstasy. The four main characters all give equally well crafted turns as their respective characters, but it was Mikkelson that took command of every scene he was in. The way he conveys deeply rooted misery with such conviction and realism is just hypnotizing. The glossy eyes, the way he delivers his lines, this is a performance that will enthrall each and every viewer. Mads Mikkelson is more than deserving of at least a best actor nod.

I want to end this review with a somewhat incoherent rave for the final scene. To describe the final scene is to delve into the most painful parts of 2020, a sequence that delivers unrestrained and unrestricted joy was a bit painful after having a terrible year now behind us. It was a release, a cathartic, resolute release from all the burdensome pains that may plague every individual in the world.

You finish the film with such a different outlook that you may be a completely different person. You have a bounce to your step, you may smile, nothing can stop you. This scene was executed with all cylinders of talent firing all at once. Mads’s dancing, Vinterberg’s direction, the intimate cinematography done by Sturla Brandth Grøvlen, it’s the best ending to a film that this past year has to offer.

Another Round is officially selected for the Oscars’ foreign film category. If you were to ask me, the film is more than deserving of a place in the Best Picture category. Mads Mikkelson’s performance is the pure essence of Oscar material and deserves a nod for his final scene alone.