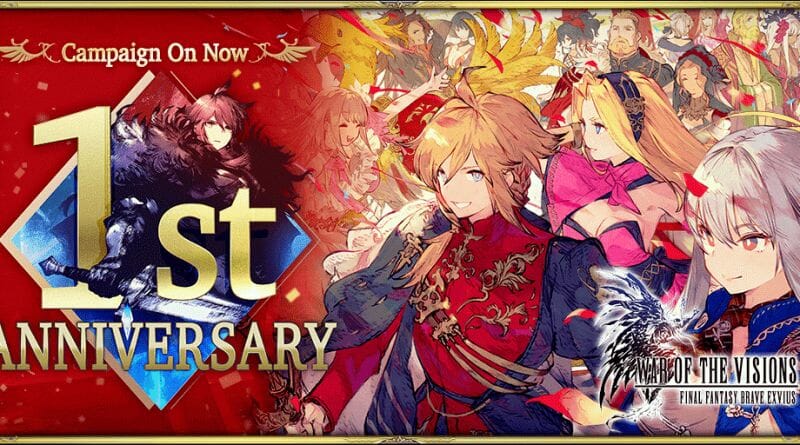 SQUARE ENIX® invites players to join in on the festivities and celebrate the first anniversary of the hit-mobile tactical RPG WAR OF THE VISIONS™ FINAL FANTASY® BRAVE EXVIUS®, which has been downloaded more than 21 million times worldwide. As part of the ongoing anniversary celebration, the game kicked off a FINAL FANTASY X collaboration event with different quests and rewards themed on the beloved game. As part of a limited time promotion, players can also collect the fan favorite protagonist, Tidus, and add them to their party by simply logging into the game now through May 4.

Get UR Tidus for Free – All players who login during the campaign, now until May 4, will receive the time-limited unit UR Tidus, the beloved hero from FINAL FANTASY X. Featured as a UR unit, the highest and more powerful rarity in the game, Tidus is the perfect unit for players who want to begin their journey in the game with a strong party in battle. He can perform the Limit Burst “Blitz Ace,” which deals 4-Hit large damage to his target. Players can upgrade their Tidus by completing the “Tidus Release Celebration Training Challenge Missions,” available until the end of the campaign.

New Time-Limited Summonable Units – Players can attempt to summon two brand-new UR units: Yuna and Auron. Yuna is a versatile unit capable of casting powerful magical attacks as well as recovery spells, and she can perform the LB “Energy Ray.” Auron honors his fame as a highly skilled physical attacker who can also support his comrades. Topped with his mighty LB “Tornado”, Auron can play a decisive role in battle when included in the party.

New Vision Cards – Recall two of the most iconic scenes in FINAL FANTASY X through the art featured in two brand-new collaborative vision cards: UR “Suteki Da Ne” and MR “A Place Unknown.” They will be available to summon only during the collaboration period, and both have useful abilities to aid players in a variety of situations.

First Anniversary Vision Card Presents – All players will receive the brand-new Vision Card MR “A Year’s Journey” and 220 shards to enhance it.

Key announcements shared during the livestream include:

WAR OF THE VISIONS FINAL FANTASY BRAVE EXVIUS is available now as a free download with in-app purchases through the App Store®, Google Play™, and Amazon App Store. Text is supported in English, French, German, Spanish, Korean, and Traditional Chinese, while voiceovers are supported in English and Japanese. For more information, please visit: https://wotvffbe.com/.