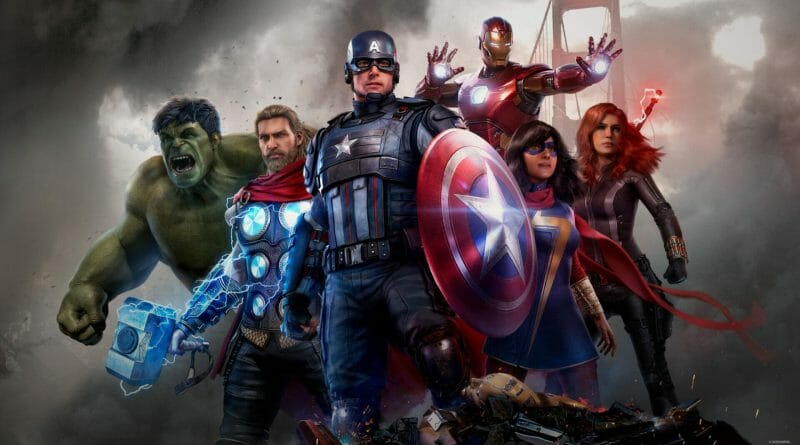 Square Enix and Crystal Dynamics team up to bring forth the very first Avengers-centric video game. Assembling a team that’s almost the same in comparison to what we have come to love and see on the big screen in the Marvel Cinematic Universe. An Avengers team consisting of Captain America, Thor, Hulk, Iron Man, Black Widow, and Hawkeye, at least prior to the events of A-Day. The beta wastes no time in putting the player in the midst of the action.

The beta opens up with the massive battle against Taskmaster on the Golden State Bridge, giving the players their very first individual experiences with each member of The Avengers. The great thing about the game and what I consider to be a great sense of uniqueness in terms of gameplay is the sense of individuality when playing as a different member of The Avengers. Each member has their own short and long-range attacks, their own set of super moves and individual skills tree to really create an even more expansive, engaging, and unique style of gameplay.

On the flip side, while the graphics have been greatly updated since the game’s official reveal, it is still not as visually appealing as it should be. Even when you change some of the heroes’ costumes. We could hope for a much cleaner look when the final product arrives next month but only time will tell if that’s even a huge concern to Crystal Dynamics.

The loading screens are severely boring and having JARVIS instruct you while you’re in the Quinjet on your way to a mission instead of having The Avengers plan their mission and their attacks is a huge turnoff. I would’ve preferred to have felt the realism of being an Avenger and having whoever is leading the mission give direction and coordinate the attacks prior to engaging in the missions. That’s just me.

Cinematically though, here is where the game really shines. More so when using the in-game photo mode which you can use really capture the essence of the game. Using the provided filters, camera modes, and depth, you can really capture some beautiful in-game scenery and intense moments of action with The Avengers during their missions.

However, despite the epic start to the beta which concludes with an epic 1-on-1 boss battle between Black Widow and Taskmaster. The missions you are given after the fact which give you a solid hour or so of gameplay with Kamala Khan and Hulk which also ends with an epic 1-on-1 boss battle between Hulk and the Abomination, unfortunately, becomes dull and severely repetitive. Land here, infiltrate, hack or destroy said systems and destroy an X amount of waves of incoming A.I.M enemies.

Most of the missions are short and a bit lackluster despite being able to wreak havoc with whatever Avenger you pick to play with. The game also suffers from an uncanny resemblance to Bungie’s Destiny. Where missions are more so the same just with different levels of difficulty, length, and boss battles here and there. My only hope that this is not the case with the final product mostly due to it losing the appeal of replayability. The only reason I see so far to replay any missions if the option is there is being able to tackle certain missions with other Avengers or Marvel heroes. But you can simply do that by playing the HARM missions over and over.

The loot and gear system is also another critique of mine about the game and something that is once again heavily reminiscent of Destiny. Mostly due to the gear having different levels of defense and attack. But its almost redundant due to the fact that these superheroes shouldn’t need additional gear to up their powers or defenses. I think being able to implement that into the gameplay mechanics, and leaving things simple with just a skills tree would’ve sufficed.

Additional skins (costumes) from the comics would’ve been a great way to implement certain gameplay mechanics. A perfect example is Iron Man’s stealth armor. While I didn’t purchase it in the beta, using the stealth armor should give you certain attributes other armor suits wouldn’t normally have. Hulk as well would benefit from something like that given his different iterations like World War Hulk, Professor Hulk, and things like that.

I think I’m ok with a level tier, to unlock certain things but I can see this system being exploited and forcing players to spend additional money in order to have them buy a season pass in order for them to unlock skins, resources, emotes and other cosmetics. It’s something that’s become a staple in video games as of late and overall its not a great idea.

One thing that really did have me excited and something I was hoping the game had was Avenger specific missions. I’m all for the team ups but I really wanted the game to have missions set for specific characters because their specific abilities were crucial to the mission. I’m happy we got one of those in the beta, but even that one Hulk specific mission needed to be more than the infiltrate, hack/destroy said objective while fighting off waves of enemies.

Overall though, the beta was thoroughly enjoyable, and while I do have my critiques for the game, at least in this version. I didn’t find myself overly bored with it which is a good thing. I also realize this is just the beta version of the game so there are things that still need work and those issues could be fixed by the time the game launches or even post-launch so I’ll withhold any additional pre-judgments on an, as of yet, unfinished product.