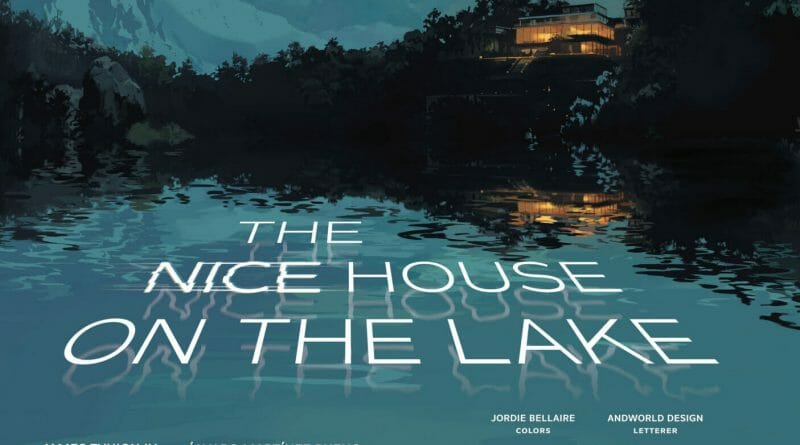 
The Nerdy Basement’s DC Comics Picks of the Week: The Nice House on the Lake #7, Monkey Prince #2, Batman: Killing Time #1, and Dark Knights of Steel #5

This week DC Comics is coming in hot with the hot return of The Nice House on the Lake, the second installment of Monkey Prince, a couple of new #1s with War for Earth-3 #1, and Batman: Killing Time #1. World of Krypton holds the trial of the century and Dark Knights of Steel sees two major releases this week with its fifth issue and its first collected release Dark Knights of Steel: The Gathering Storm which collects the first three issues of the hot title from Tom Taylor and Yasmin Putri.

Arkham City: The Order of The World #6:

Dr. Joy has reunited with her missing patients. Now all the survivors of Arkham Asylum’s destruction are together again under one very, very nice and normal roof. But they are not alone in this strange reflection of their old home. For there is a specter with them, one of flame, flesh, and righteous fury—the angel Azrael, and he is very, very angry.

The deadly conclusion to the Abyss arc as Lex Luthor’s dangerous master plan for Batman Inc. is revealed. And an old ally returns to pull the lost Batman out of Abyss’s darkness and a new member of Batman Inc. rises! In the final chapter of They Make Great Pets, Maps finds the missing piece to the shocking and deadly mystery…with a little help from Batman!

Three villains, one Dark Knight, and a deadly heist gone wrong. Catwoman, the Riddler, and the Penguin join forces to pull off the greatest robbery in the history of Gotham City. And their prize? A mysterious and priceless artifact in the secret possession of Bruce Wayne! But, as the events unfold, what fun is a heist without a bloody double-cross or two? The blockbuster team of Tom King and David Marquez bring an epic, white-knuckled, action-packed tale of a young Batman desperate to recover his most prized possession from a host of violent rogues before the clock strikes the Killing Time…

Betrayals and assassinations have brought the world to the brink of war! As the Kingdom of Storms and Themyscira prepare for invasion, the El family is reunited at last to mourn their father…but what secrets does Bruce Wayne have that could prove vital to the future of the land?

Collecting the first 3 issues of Dark Knights of Steel.

The Tower under siege!

With their grand scheme crumbling around them, Dr. Wear and the mysterious Dr. Ocean have lost control of Arkham Tower to the patients it houses…who just so happen to be some of the most violent, murderous villains Gotham City has ever seen. The Bat-Family on the inside are in shambles: Huntress is wounded, Nightwing is carrying 175 pounds of smarmy jerk on his shoulder, and Dr. Meridian is incapacitated. Who’s left to save the civilian hostages from this nightmare? Hmm…wasn’t there a patient who thought she was Harley Quinn?

Then, in House of Gotham part 9, the boy is growing up…and growing into the man that Gotham City has made him. Through the trauma of his time with the Penguin to the terror wrought by Azrael, a new mission springs to mind for this lost son of Gotham…murder.

The Justice League and Justice League Dark team up to navigate the remade world of chaos. All the heroes must come together to save what’s left of the world they have dedicated their lives to protecting. But has Doctor Fate gone bad? Oh no, he has.

In this shocking conclusion, Justice League Incarnate must face their worst threat yet: each other!

With half the team under the control of the forces of darkness, what chance do they have of stopping Darkseid from achieving his ultimate victory? No matter who wins, everyone loses because the real crisis has yet to come…

Batman and Robin fight with Pigsy over…a part of Monkey Prince’s body that fell off and is rolling around moving on its own? And Pigsy better grab it quickly, before Monkey Prince transforms back into Marcus Sun, because there’s no way a regular teenager could survive that!

Everyone must go! Under pressure from the board, Red Tornado is forced to fire some of his hero colleagues so the company can stay afloat. First on the chopping block…Power Girl! Will her self-help bible by Maxwell Lord assure her survival? Or is she as doomed as Krypton once was?

If Static wants to liberate the imprisoned Bang Babies of Dakota, he’s going to have to turn them into an army…and unfortunately for him, he’s also going to have to fight alongside—and even worse, trust—the jerk who tried to burn down his house: Hotstreak!

As the War for Earth-3 begins to rage, Rick Flag’s new Squad—including Cheetah, Mirror Master, Peacemaker, and a parademon of Apokolips—confronts Waller with a mission to bring her home and stand trial for her crimes.

But Waller didn’t go to Earth-3 alone and now the Squad must face its predecessors, including the deadly Talon, Match—a clone of Superboy—and the Justice Squad’s newest member from Teen Titans Academy.

The Nice House on the Lake #7:

One of the most critically acclaimed and bestselling horror titles of 2021 returns for its shocking second act—and now is the perfect time to enter the house!

The 10 hardy survivors gathered in the house by their mutual friend Walter thought they’d finally cracked the code on his plans…and now everything they thought they knew has literally changed. Can they free themselves from their patterns? Or are they all just determined to build a prison of their very own? Grab the first collected volume and get caught up on the most surprising series in comics!

The Teen Titans, the Flash and the Suicide Squad all collide on Earth-3—home of the evil Crime Syndicate—on the hunt for former Task Force X mastermind Amanda Waller.

As Waller tries to take over the alternate Earth and dethrone evil versions of Superman, Wonder Woman, Batman, and other heroes that rule it, her former partner—Rick Flag—arrives on E-3 bent on making Waller pay for her crimes, while the Titans and Flash hunt for a missing academy student they believe was kidnapped by Waller to form her mysterious Justice Squad.

The trial of the millennium!

As Jor-El and his brother investigate the mysterious mass-extinction events ravaging Krypton’s natural world, a much more public event holds the planet’s attention—a member of the House of El stands trial for aiding violent revolutionaries. As all of Krypton watches, a betrayal is revealed that threatens to shatter the long-standing friendship between Jor-El and General Zod.