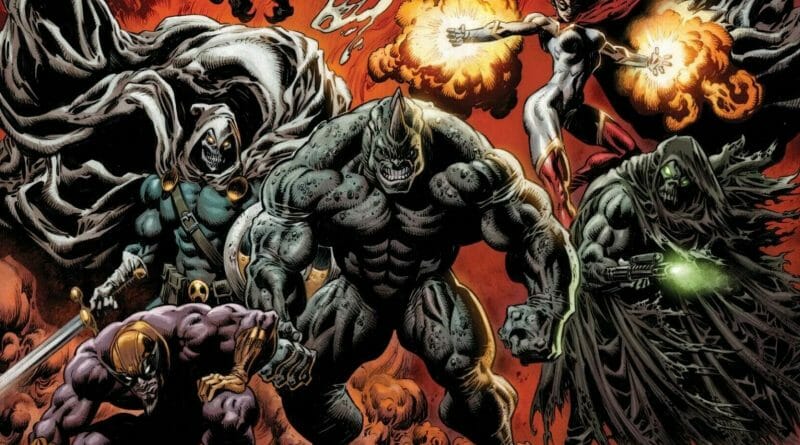 
Wilson Fisk has put together the Thunderbolts. Despite their mission, the team has already lost some of its members. Ironically, it is not because of the tasks sent by Fisk.

As some of you may know, Knull is now wreaking havoc. After his imprisonment somewhere in the galaxy, he broke out. The crazed king has set his sights on planet earth. Many heroes and even villains are banding together to take on this monster. However, the world is now covered in symbiotes. Many of the earth’s defenders are corrupt fighting alongside Knull. One of the defenders is a group of villains going by “The Thunderbolts”.

Wilson Fisk is making a public announcement, regarding Knull’s invasion. He informs the public that he was behind the return of the group. The team consisted of Taskmaster, Mr. Fear, Star, Batroc, Snakehead, and Ampere. According to Fisk, they had all died in action. As he remembers their sacrifice, we are sent back a few days prior. Fisk is trashing the team.

Kingpin is explaining the Knull situation. Then tells the outlaws that if they cooperate and save the world, they will have one hell of a paycheck. Yet, if they refuse then they will be put back in jail. He even said, “Wait for Knull to come kill you in your cell.” He really went through all this trouble to take out this Avenger-level threat. Incendiary, another member of the group is afraid of Fisk and backs out. The guards escort the villain out, but he never makes it to his cell.

He attempts to escape and is killed for the action. Ampere was actually going to choose prison too but changed his mind after Inceniary’s fate. He quickly changes his mind. Rhino then asks how are they going to stop the invasion. Fisk then replies, “I have no idea.” He then tells them that they also have to find the person who can help them. Taskmaster questions Fisk’s choice and Fisk isn’t in the mood. Mr. Fear then explains that Star is going to be a great help to the team.

Fisk tells the team that masks are not allowed. Even stating that he made the “no masked vigilante” law. He also tells them that they will be going by the Thunderbolts name. Taskmaster is also against this. His boss assures him that it’s fine, especially with the fact Fisk copyrighting the name. Our team is walking through a wasteland. Taskmaster leads the groups and continues complaining about the name. As Snakehead gives her two cents, has half her body chopped on by a large symbiote dragon. The team spread out and do what they can to take the creature out. Fear distracts the monster with a spray gun. Then, Star blows the monster’s head off.

However, this leaves her close to fainting with Batroc catching her. Ampere then explains that they need more to take on Knull. That is when he is killed by Fear for his tech. Fear then disarms the deceased Ampere. While this is going on, Rhino leaves after Taskmaster says that he is against anyone else leaving. Yet, he lets Rhino leave, telling the team that he doesn’t want Rhino to kill him. Batroc and Taskmaster are then handed Ampere’s tech for an extra boost.

The Thunderbolts continue their adventure. Mr. Fear tries taking jewelry with Taskmaster disapproving of the act. This is because they can’t sell it to anyone due to the circumstances. They have a brief argument and then are distracted by heroes fighting off symbiotes. Iron Fist, Luke Cage, and Jessica Jones are watched but aren’t aided by the Thunderbolts. This is because they believe the Defenders will bring them to jail.

They leave and are attacked by another symbiote monster. This ends quickly, with Taskmaster decapitating the creature. Turns out the beast was Ampere’s dead body. This scares the leader, he tells them to avoid contact with the symbiotes. They soon are running for their lives as a hound of symbiotes chases them.

Batroc is behind the team and slows the creatures down. The team hotwires a boat and Batroc survives. He lives up to his name by leaping from the hound out to the boat. Taskmaster asks if he was touched, with Batroc saying no. They then make it to “the help’s” mansion. They find that it is none other than Norman Osborn.

Matthew Rosenberg told a very interesting story. The transition from Fisk honoring to talking trash to the team was great! The dialogue, primarily for Taskmaster was also a good read. The way talks with the other members, serious or funny was awesome. However, I didn’t like how half the team was killed off or left. Don’t get me wrong, adding stakes is important for a story like this. Yet, half the story lost the team is reduced from eight to four. I do have faith the tie-in will continue to enhance the main story’s arc.

As for the art, Juan Ferreyra killed it! I love the dark tone set with the image. It makes sense because we are literally in dark times. The detail of both characters and the surrounding actions/backgrounds were breathtaking. The only bright moments are heroes fighting with their abilities and even the red background. My favorite photo was Taskmaster killing Ampere’s body. Also, this issue was dedicated to the late Mike Hobson. From everyone at The Nerdy Basement, our condolences continue to pour out to the friends and family of Mr. Hobson.