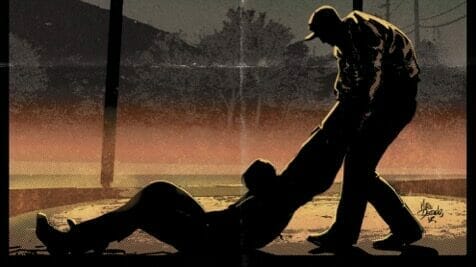 
The Fourth Man, as a whole, is a pick-up-and-go read. If you don’t have an inkling about the tone of this story by the bloody Wacky Waving Arm Guy then you do once you’ve read the third page. From the very first panels, you’re thrust into a world of homicides, detectives, and dead bodies. If you would like to read an interview I did with the creators of The Fourth Man. Head to this link.

Previously on The Fourth Man:

The first issue tells the story of Jimmy. We open to a 1991 police station and two homicide detectives are in the coroner’s office. After a brief shot of the body, we are thrust backward in time to learn more about the man. Jimmy is a down-on-his-luck P.I. Is he being followed or is he doing the following? It’s a bit hard to tell. He can’t catch a break and while big dollars are being thrown around for his services, Jimmy is unable to deliver.

Without going too far into spoilers, there seems to be some interactions and altercations between a car dealer, D’Agostino. While on a stakeout, he is ambushed and beaten up by the very person he is supposed to be taking photos of. Soon enough, after seeing an accomplice in the paper about being murdered, he packs some things and strives to get far away. Unfortunately, he reaches his untimely demise by a tattooed hand pointing a silenced pistol and he is left slumped over this car in a pool of blood.

This time, in The Fourth Man #2, we open with the dead body of one Shane Wyatt, the very man who was in the newspaper in The Fourth Man #1. Shane is a bail bondsman who was found stabbed to death in his own van. And the story begins on its inevitable trail towards that end. We are sent back in time one week to where Jimmy and Shane are chatting in a bar.

Shane is discussing the best way to rid someone with a Molotov cocktail, and low and behold, it’s D’Agostino. The timeframe is somewhere between Jimmy being beaten up by the cronies and him being murdered. Jimmy offers Shane $32k to get rid of either the car or the people, it’s unsure what he’s alluding to. When Shane arrives at the car dealership to perform his criminal deed, he is intercepted by someone who threatens him with a gun. Shane walks away without completing his task. D’Agostino is skeptical as Shane curses himself in his van and drives away.

The next afternoon, we see Shane recruiting a drive-thru employee, I assume an old pal, into doing something nefarious. Then they’re back in the same bar and telling tales of woe. There’s a lovely panel here, which sounds crazy, but it’s just black. Shane’s story is talking about being smacked over the head and that black panel throws you right into the story. I actually wasn’t sure whether the whack was a part of his story or the present day as I was reading. Money is discussed.

A few days later Shane is confronted by Jimmy again about the delay in his deal. Again, the fact they are whispering about this is lettered in a dimmer font and I really liked it. Of course, their voices would be “dimmer”, I’d never thought about it before. A couple of nights later, Shane is on the job again. He tries calling Chuckie on the phone but to no avail again (I assume Chuckie could potentially be the third issue’s man).

He moves to his van, ready to psyche himself up for the job. But a hand comes from behind him and slams Shane’s head into the steering wheel. With blood flowing freely, a tattooed hand reaches from the back of the van and strikes Shane with a large knife. But before he does, the killer says, “I want you to know big Chuckie gave you right up.” I think my assumptions were correct. The issue finishes with us back in the police station discussing the unusualness of having three bodies in at once who didn’t die of old age.

The artwork is incredible. Everything down to the smallest details like etching on the flannelette shirt or bottles in the bar is complete and there are no shortcuts. I appreciated the almost tv aspect of it where the panels are like a camera panning across the scene or back and forth between the speakers. There are whole pages that are split into panels but encompass one shot, it’s hard to explain but lovely when you see it.

I am thoroughly enjoying this series. The story is quick-paced but not lacking in any detail. I felt as if I was watching a limited series on Netflix and wanted to binge all night. The artwork is exceptional and adds to the entire tone of the series. Although a sordid world like this is familiar within TV and movies, it really feels like a unique story as you get to know the victims after they have met foul play.

There are hints of foreshadowing and, I’m sure, red herrings. I am eagerly awaiting the final two issues. This four-issue run is a must-read for any thriller or graphic novel aficionado. I would not be surprised if this got picked up by a producer in the near future.