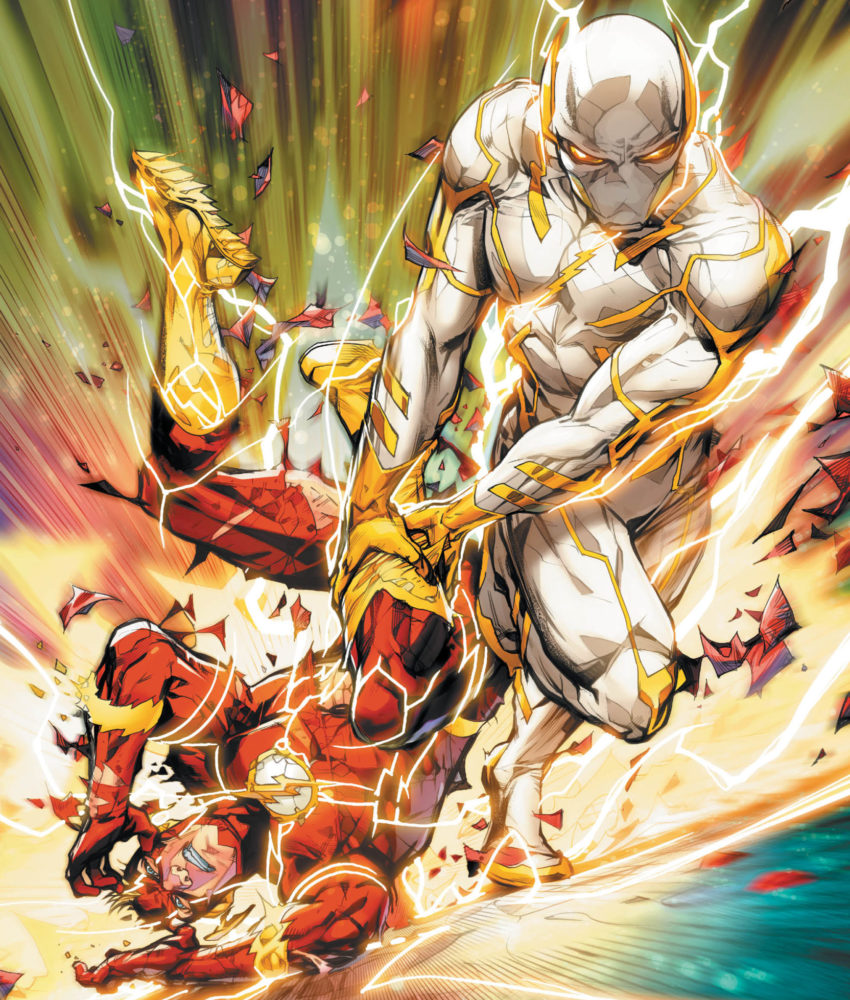 Home Comics THE FLASH 751 TRAPPED WITH A PARADOX!! (REVIEW)
ComicsReviews

THE FLASH 751 TRAPPED WITH A PARADOX!! (REVIEW)

The Flash: Drag Race of Death, now that’s one hell of a name for this issue. Joshua Williamson has found his second wind in this run of his Flash Epic. There are so many good things that I could say about this issue but lets keep it short and sweet shall we. ?

This issue picks up with a quick flashback of a time where the Flash saved the life of August Heart (Godspeed) and a few other members of the CCPD from a barrage of bullets. August was young and reckless and as such made a stupid mistake luckily The Scarlet Speedster was there to save his tail. Guys… this was only the 1st page lol

From here we jump to current day and Flash is fighting Godspeed who is working at the pleasure of Paradox, a being of Multiversal energy, he’s kind of a big deal now. After some traditional exposition from the Villain; Flash learns Paradox’s back story and also learns that Paradox knows all his Flash Facts! (yea I had to…sorry, not sorry lol) Paradox needs to destroy the Flash but if you’re thinking that maybe it’s for some altruistic reason you are very mistaken. Paradox wants to become the God within the Multiverse and the only way to do that is to eliminate the Flash and his Legacy.

Meanwhile in the Speed Lab Iris West is looking for anything to help them defeat Paradox when she finds a hologram message left by Commander Cold, a message from beyond the grave. Thankfully Commander cold left them an interactive library, the good news now she knows whos help they need… the bad news is Flash is not going to like this, nope not one bit.

Going into the final act of this issue we learn that Godspeed was a double agent much to the pleasant surprise of Flash, he was waiting to learn what Paradox plan was so that they can stop him together. The plan would’ve been successful if not for the fact that Paradox is incredibly powerful. Paradox takes Godspeed down with one blow. Flash tries to intervene but in a tremendous display of power from Paradox the Flash disintegrates and when he wakes up he’s told you don’t have to run anymore by a very familiar face.

This story arc has been fleshing out since way back in The Flash issue 50. Joshua Williamson is proving that there are plenty of Incredible stories out there left to be told of our “Legacy” characters. This story is a Must read for any fan of the Flash

THE FLASH #752
Exiled outside time and space in Paradox’s realm, the Scarlet Speedster is confronted by ghosts from his past! Meanwhile, Iris discovers the one person who may help the Flash defeat Paradox—and it’s not anyone Barry Allen would ever ask for help! Will they be able to find where—or when—this unlikely ally is hiding before it’s too late?
ON SALE
03.25.20