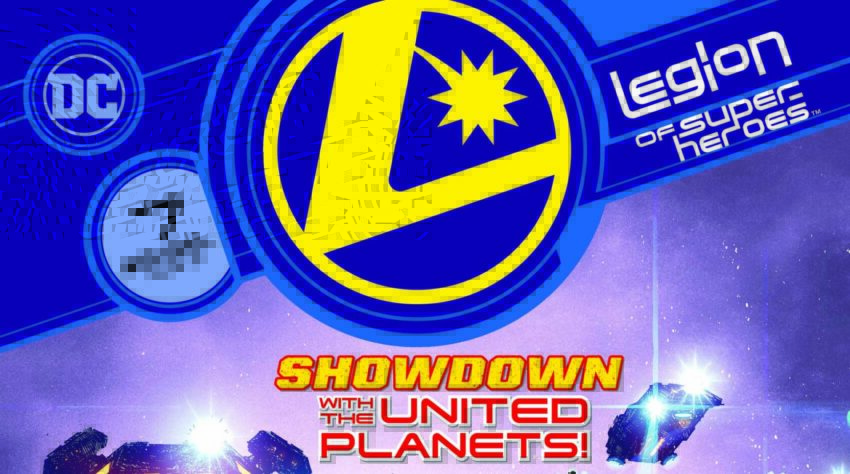 Jonathan Kent, intergalactic fugitive! The United Planets is less than thrilled with the decision to bring Superboy a thousand years into the future to protect the past. Planet Gotham is under siege. Ultra Boy’s homeworld is on the verge of all-out war. And as if that weren’t enough, new Legionnaire drama unfolds as Saturn Girl and Cosmic Boy throw down over who should take on the Legion’s leadership! Plus, Brainiac 5 will reveal a secret that will make one Legionnaire quit the team-and we ask the burning question: Who is the strongest Legionnaire? Find out in the only book telling you the future of the DC Universe every month!

This issue of Legion of Super-Heroes starts as the title suggests, with the Legion coming face to face with Madam Honor President and the United Planets for an unscheduled meeting to discuss their actions. Nothing much was accomplished by this meeting except that it set the stage for the underlying tone of the story which was a struggle to clearly define the leadership of the Legion. Leadership has been a cornerstone of the Legion of Super-heroes comics dating back to the Silver-Age where it seemed like every arc there was an election to pick someone new. In hindsight, that could be the best way to explore all the different heroes in this series where 7 issues in and we are still meeting new characters and heroes. The Legion holds a vote and it seems as though there is now new Leadership to our Legion of Super-Heroes. The artwork in this issue is really engaging and adds a lot of life to the story.

Issue #7 of Legion of Super-Heroes gets a 6 out of 10
This series shows a lot of promise and it will really take off when we finally find out what direction the creative team is taking.

Ok, so truth be told there really isn’t a whole lot to spoil in this issue. The Legion, as stated above, goes toe to toe with the United Planets. The President is a Huge fan of Superboy Jon Kent, as she should be, but there is some controversy because they are disrupting the space-time continuum. In the end, it is decreed that “The Great Superman” as the United Planets refer to him will stay and is recognized as a new Legionnaire. All is not well for the Legion of Super-Heroes however as Saturn Girl and Cosmic Boy get into a huge disagreement over how the situation with the United Planets was handled. As we all know Saturn Girl has the ability to read minds which admittedly can be very helpful but also incredibly intrusive and in this situation, Cosmic Boy feels the latter. After an argument that also includes Brainiac 5 a Legion meeting is held where they will now possibly vote in a new leader, that leader is now Ultra Boy! Ultra boy accepts leadership and just in time to face off with his father Crav the Leader of The Planetary Rimbor.

The tease for issue 8 is “The Trial of the Legion” hinting that the Legion will surrender and possibly stand trial for their actions. The best part of this tease is that the next issue will feature “A Once in a Lifetime 41 All-star Artist Legion Event”. I’m not going to say that I’m not excited because honestly the idea of having so many artists on one book with this slew of characters is very exciting but I’m really hoping that they pull this off right. This is a series with a ton of potential and this event could be the boost they need to really take off.

This series shows a lot of promise and it will really take off when we finally find out what direction the creative team is taking.

Miguel MartinezJuly 29, 2020This series shows a lot of promise and it will really take off when we finally find out what direction the creative team is taking.6.0110
Your RatingUser Rating: 0 ( 0 Votes )
Share