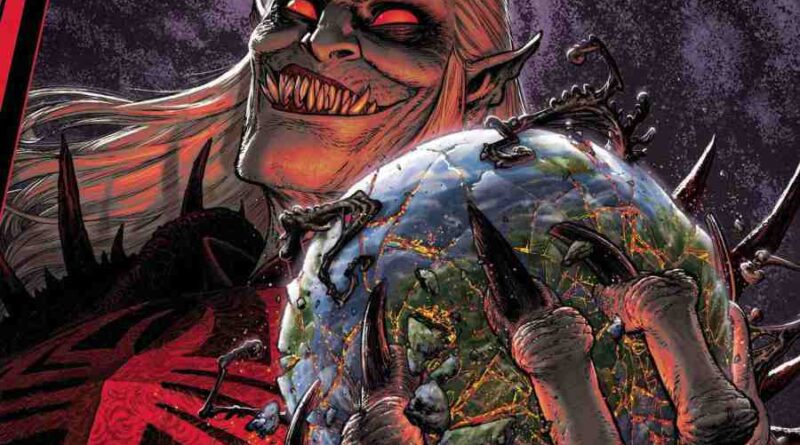 King in Black: Planet of the Symbiotes #1 Review


In Planet of the Symbiotes, Cletus Kasady is back and is the strongest symbiote out there!!!

The world, now covered in the living black goo is a shell of its former self. Many heroes have either fallen or under the control of Knull. Symbiotes that we already know are without a doubt siding with their master. Civilians are either dead or missing. It is nothing but madness and it only gets worse from here.

There are four symbiotes on the hunt for Eddie Brock’s son, Dylan. They are Riot, Agony, Lasher, and Phage. Even though they are searching for the symbiote killer, they have found a little boy. The kid lost his mom because of the four. All they do is scare him and tell him that he’s dinner. He is then saved by Andrea Benton aka Scream. The boy is out of harm’s way but the four fuse into one.

Together the monsters are once again Hybrid and tell their sister to reunite with them. Scream explains that she is cursed with being a symbiote. She adds that one of their weaknesses is her main power. Scream refuses to join her siblings and fights them. She has the upper hand, but they are able to overpower her. Hybrid has now absorbed her, they are now unstoppable. However, Scream fights back and rips them open. Scream stands tall and comforts the kid. We then see the kid named Danny and Scream walking away together.

We then go to the Ravencroft Institution as a team of armed men are looking for Knull. As they do this they mention John Jameson. The team is then ambushed by symbiotic dragons. However, one of them is able to survive and enter the building. It turns out that he is a follower of Knull. The king himself surrounding a dark room and is overseeing the body of Cortland Kasady.

For those that don’t know, Kasady is an ancestor of Cletus aka Carnage. Cortland was a simple, caring, and respected man in the 1600s. Yet, this all changed when a cult kidnapped his then-lover, Molly Ravencroft. He saved her and went into the cave she was held captive in. It was the living abyss that caused him to turn evil. He was an infamous serial killer, even killing Molly. Knull sees him as his beckon of sending more darkness to the world.

Eventually, he gifts Kasady with a symbiote, resurrecting him. Now going by Plague, the older Kasady takes the life of the armed man. More task force individuals to confront Plague but are killed. John Jameson or Were-Warden confronts the powerful being. The pair know one another, but there are no records of a previous encounter. As Jameson is about to be killed, he is saved by Misty Knight.

The save is temporary as both heroes are now having their life force sucked out of them. At the last second, they are saved by more task force men. Plague leaves like Knull did and wants to find Eddie. The issue then ends with Knight and Jameson discussing Ravencroft and their new problem.

Clay McLeod Chapman’s and Frank Tieri was decent at best. The story made sense in terms of the following. Yet, there were only a few things that stood out. Scream’s mini-arc was pretty cool. Cortland Kasady’s introduction was better and that really it. I like how he is related to Carnage and that Knull is behind this. It comes full circle! But that’s really it for this story’s writing. I do know that Plague’s involvement will bring more interest to the main story. Really cool edition and who knows, the younger Kasady and the older one work together.

As for art, this four-person team didn’t miss a beat. Guiu Vilanova, Dean White, Danilo S. Beyruth, and Rachelle Rosenberg worked well together. From Plague’s appearance to Scream’s and Hybrid’s involvement it was awesome! Details are always important and the key to great art. They definitely knock that aspect of the issue out of the park. It is beautiful! Also, this issue was dedicated to the late Mike Hobson. From everyone at The Nerdy Basement, our condolences continue to pour out to the friends and family of Mr. Hobson.