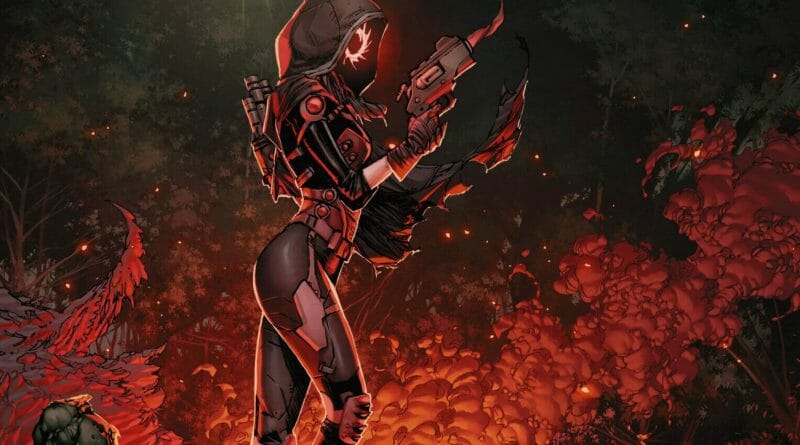 An Exclusive, Behind-the-Scenes Edition Of the Making of the Upcoming Created-Owned Series

Get An Inside Look at The First Release from Scott Snyder’s Best Jackett Press Label, an All-New Series about Humanity Trying to Survive in Everlasting Darkness

Imagine that tomorrow the sun simply doesn’t rise. You wait. And you wait, but night just continues…

You can still feel the sun’s warmth – it must be there – but for some reason, light no longer reaches the earth. There’s only darkness. But this new darkness, there’s something strange about it, something terrifying. Because anything – or anyone – that stays in it too long starts to change…

Starting at 72 pages, NOCTERNAL COLLECTOR’S EDITION is a one-of-a-kind reading experience, with Scott Snyder’s script displayed alongside Tony S. Daniel’s linework to provide a rare look at the process of making comics. If funded on Kickstarter, NOCTERNAL COLLECTOR’S EDITION will be released to backers ahead of Image Comics’ release of issue 1 this winter and would mark the first time that one of Snyder’s scripts has been published in its entirety.

NOCTERNAL takes place ten years after the world is plunged into an everlasting night that turns all living creatures into monstrous “shades.” Enter Valentina “Val” Riggs, a skilled “ferryman” who transports people and goods along deadly unlit roads with her heavily illuminated eighteen-wheeler. When an old man promising sanctuary offers Val a job to drive him and his granddaughter up through the Rocky Mountains, she takes it, hoping there might be some truth to his claim. What she finds in the end, though, is something much more horrifying than any shade…

“2020 has put a lot of things into perspective, for comics fans, pros, and businesses–and for me,” said Scott Snyder. “With everything going on right now, I wanted to return to creator-owned work in an even more dedicated way. NOCTERNAL is the first release under my new Best Jackett Press label and will be released by Image Comics as a monthly series, starting early next year. But with conventions shut down for the foreseeable future, the creative team and I wanted to find a direct way to build meaningful relationships with our fans before issue one drops to give them a unique experience. We decided to create a behind-the-scenes collector’s edition of the first issue that provides a different reading process, looks at how a comic like this gets made, and highlights Tony’s phenomenal linework.”

To showcase Daniel’s line art in all its detailed glory, the creators are printing the collector’s edition in black and white, available in two formats: an unsigned softcover and a hardcover signed by Snyder and Daniel. Both editions will only be available to Kickstarter backers. The funding goal of $37K will cover the book printing, rewards production, and fees from Kickstarter, Stripe, and BackerKit. Any funds that are raised beyond the funding goal will help cover production costs for the first story arc, up until issue #6. Additional pledge tiers include a limited edition lithograph, a sketch by Daniel, a master class with Snyder, and more.

“I really don’t think anyone’s ever released anything like this before, ahead of a series debut,” said artist Tony S. Daniel. “Publishers release ashcans at conventions, but we’re excited to share a rare look at how the comic gets made, especially since Scott’s scripts are almost never seen by comic fans.”

“Creator-owned books are about connection,” said Snyder. “Instead of asking you to trust us with company-owned characters you already love, they ask you to follow us into worlds unknown. They’re about taking a leap of faith–together. So with this, we wanted to offer you something that’s personal and collectible that also allows us to connect with you and show you how a book like this gets made.”