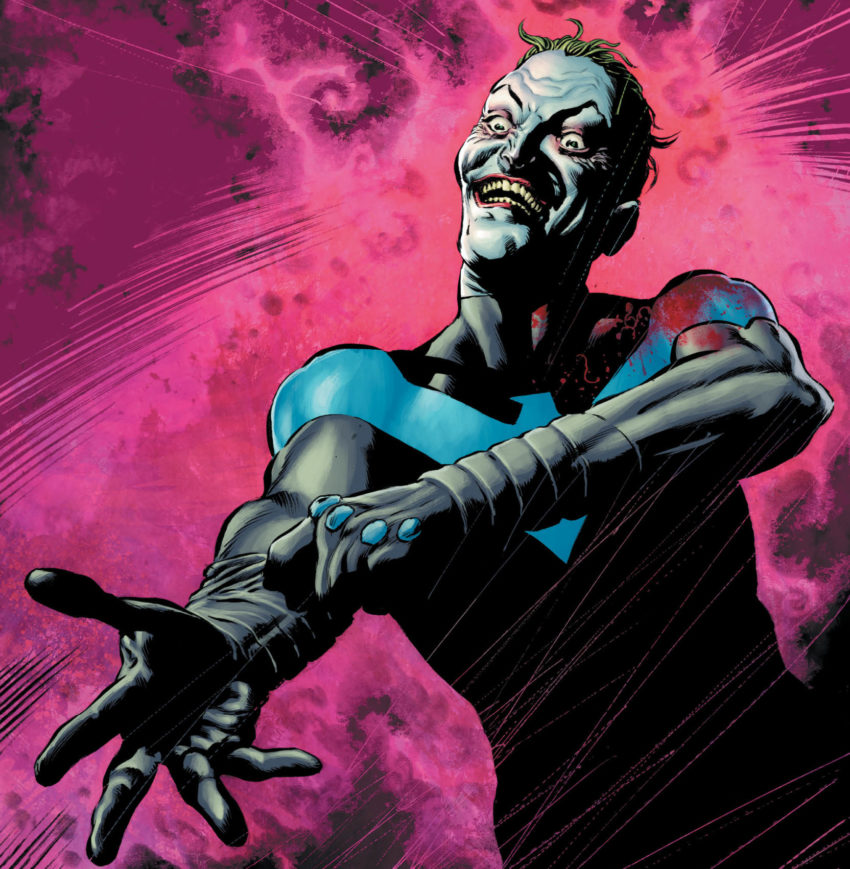 NIGHTWING #70: JOURNEY TO THE JOKER WAR

This Nightwing Story was kind of a filler as we prepare for the start of The Joker War. The Joker War is gearing up to be a huge battle between the BatFamily and Joker plus and his new girl Punchline. This was a fun read but not a MUST READ.

This issue picks up back in Bludhaven, if you’ve been with us this long you know that we seem to be on the road back to Dick Grayson Nighwing and I couldn’t be more thrilled! Lets dive right in.

This issue centered around the Joker, his feelings on the Nightwings and also served as a quick recap of whats been going on in the life of Dick/Ric Grayson. We spend some time with 3 of the 4 Nightwings as they re-evaluate wether or not they can do the vigilante thing going forward. Truth is the weight of everything has really been heavy on them and after the events of Nightwing #68 where Talon, Ric Grayson, tried to kill them they are looking to retire their Nightwing uniforms. Unfortunately there is one, the one who found the uniforms when Dick had been shot and took up the mantle of Nightwing, Detective Alphonse Sapienza and he is not ready to give up being Nightwing. It’s really too bad that Joker only has room in his heart for one Nightwing it’s not Sapp and the Joker has no problem letting him know just how upset he is that the real Nightwing won’t come out to play.

Meanwhile Dick Grayson is getting these splitting headaches as a result of having 2 sets of memories each trying to take over his mind. He knows it has something to do with this special crystal but no idea how to set everything right, plus he’s also scared of who he will be when it’s all said and done….. is he Dick Grayson, is he Ric Grayson or is he something in between?

This issue was written by Dan Jurgens and is a prelude to the Joker War sure but it has so many layers. The Artwork and the story telling are great, I can’t say enough good things about Ryan Benjamins artwork in this issue, his pencils are crisp and pretty great in this issue.

I’m very interested and hopeful to see where Dan Jurgens takes this Nightwing book. So many strings yet to be pulled, so many possibilities for how this could all turn out and that isn’t counting these events setting up to and encompassing the Joker War. It’s a great time to be a Comic Book Fan right now guys!!

This was a good issue but the story pretty much stayed where it was. There was very little forward movement in terms of Nightwing's actual story. A good read to get ready for Joker war but not essential for Nightwing arc IMO.

Miguel MartinezMarch 18, 2020This was a good issue but the story pretty much stayed where it was. There was very little forward movement in terms of Nightwing's actual story. A good read to get ready for Joker war but not essential for Nightwing arc IMO. 7.5110
Your RatingUser Rating: 0 ( 0 Votes )
Share

A NEW TEAM OF HEROES COMES TOGETHER IN THE NEW WARRIORS #1 TRAILER! Next post