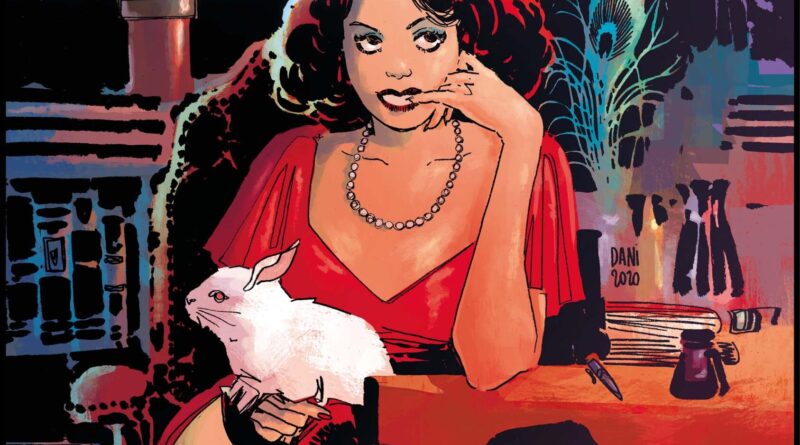 Minky Woodcock Returns In The Girl Who Electrified Tesla #1!

Features a cover by Robert McGinnis legendary poster artist for classic films such as James Bond and Breakfast at Tiffany’s!

Titan Comics and Hard Case Crime are pleased to announce that this April will see the return of the critically acclaimed hardboiled detective series Minky Woodcock. This time the fabulous female detective uncovers another sinister, sultry and twisted mystery when she gets involved with world-renowned inventor Nikola Tesla, Nazi agents, and the race to command the world’s first weapon of mass destruction in Minky Woodcock: The Girl Who Electrified Tesla.

Set during World War II, nearly two decades after the events of the first volume, Minky Woodcock: The Girl Who Handcuffed Houdini, this brand-new story is written and illustrated by award-winning artist, author, director, and playwright Cynthia von Buhler, whose past projects include collaborations with Steven Spielberg, Neil Gaiman and Clive Barker. Geeks Worldwide described the first volume as “Stunning…10 out of 10”; NB Magazine called it “bold and extravagant…weaves fantasy into fact to dazzling effect”; and Neil Gaiman stated that he was “seduced by Cynthia von Buhler’s artwork. She is a wonder.”

Cynthia von Buhler is not only the creative talent behind Minky Woodcock, but also an internationally celebrated artist and the visionary creator of Titan’s bestselling graphic novel The Illuminati Ball and the immersive NYC theatrical experience of the same name. Her work has featured in outlets including the New York Times, Broadway World, Forbes and the Wall Street Journal.

Describing Minky’s new adventure, von Buhler stated that “as with the Houdini episode, all of the anecdotes related to Tesla’s life in my book are based on fact. I really love finding bizarre, unbelievable facts and weaving them into my stories.”

Issue #1 of The Girl Who Electrified Tesla will debut with a selection of amazing variant covers, including artwork by the legendary Robert McGinnis poster artist for classic films such as James Bond and Breakfast at Tiffany’s, as well as covers by Dani Strips (2000AD), von Buhler herself, and more!