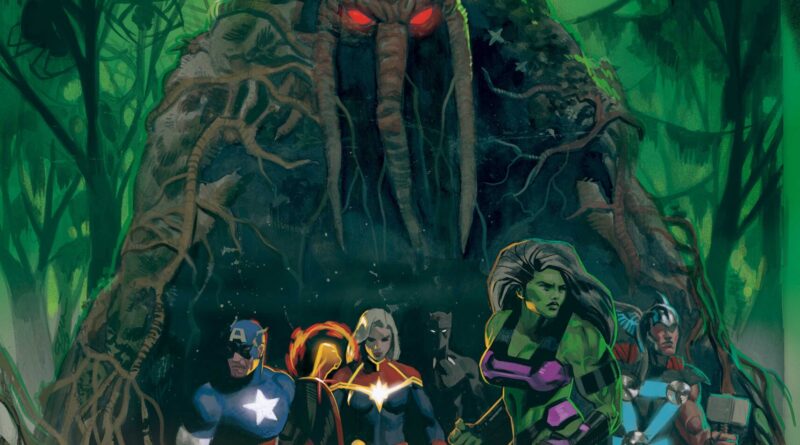 
Steve Orlando makes his Marvel Comics debut with AVENGERS: CURSE OF THE MAN-THING #1 as the blockbuster celebration of Man-Thing’s 50th anniversary kicks off this March!

Announced earlier today by horror website Bloody Disgusting, Marvel will honor the 50th anniversary of Man-Thing with a new series this March. The horror comics icon will star in AVENGERS: CURSE OF THE MAN-THING, the start of a three-part Marvel Universe-spanning saga that will redefine one of Marvel’s most unique characters for a new age. Critically acclaimed writer Steve Orlando (Martian Manhunter, Batman, Wonder Woman) makes his Marvel Comics debut with the series, joined by rising star artist Francesco Mobili (Old Man Hawkeye). Each issue will focus on a different corner of the Marvel Universe, starting with Earth’s Mightiest Heroes.

For decades, the Man-Thing has haunted the Florida Everglades. Now a new enemy has hijacked his body on a quest to take his incendiary abilities global! The Marvel Universe wakes to fear as gargantuan monoliths menace cities worldwide, with only the AVENGERS standing between the population of Earth and a planetwide inferno. Can they save Man-Thing in time to douse the fires? And does the man inside the thing, Ted Sallis, even want to be saved? All this plus a sensational new villain designed by Marvel’s Stormbreaker Carmen Carnero await readers in the exciting opening tale that will kick off an unforgettable journey for Man-Thing and your favorite Marvel heroes including the X-Men, Spider-Man, and more!

“It’s a huge honor to be asked to make my debut as part of a character’s anniversary. There’s an incredible amount of faith and opportunity there, and it’s something I never take lightly!” Orlando told Bloody Disgusting in an exclusive interview. “It is honestly amazing to be welcomed to Marvel and tell this nailbiter of a story that’s going to remind people just how unique Man-Thing is. He’ll be better positioned than ever to shock and scare readers and villains alike, but first he’ll have to survive an attack that cuts him to his core and sets the Marvel Universe ablaze.”

“If you like super heroes and the supernatural, you’ll LOVE this high octane celebration of one of Marvel’s strangest characters,” Editor Mark Paniccia said. “It feels like its own big event. And Steve’s epic story will reveal, amongst other things, an unexpected new dimension of the Marvel Universe.”

March will also see some of your favorite Marvel heroes transformed into outrageous Man-Thing personas on stunning variant covers by today’s best artists including Superlog, Bernard Chang, Greg Land, Sara Pichelli, and more! Check out the first three now and be on the lookout for more Man-Thing variant cover reveals in the coming weeks.

Since his creation by Stan Lee, Roy Thomas, Gerry Conway, and Gray Morrow in 1971’s SAVAGE TALES #1, the misunderstood swamp monster has taught readers the true meaning of fear in thought-provoking tales by legendary creators such as Steve Gerber and R.L. Stine. Prepare to burn at the Man-Thing’s touch once again when AVENGERS: CURSE OF THE MAN-THING # hits stands this March. For more information and a look at interior artwork, visit Marvel.com.

AVENGERS: CURSE OF THE MAN-THING #1