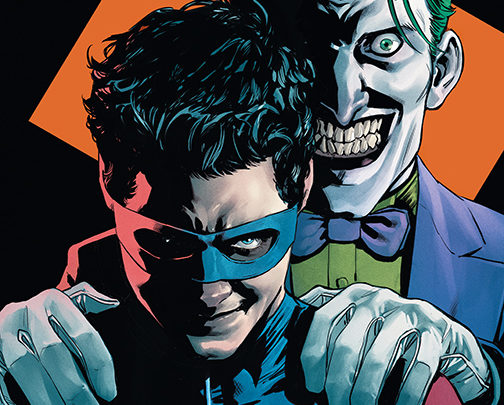 JOKER WAR: JOKER IS GOING TO MAKE THINGS EVEN HOTTER FOR THE DARK KNIGHT!

“Joker War” Turns Up the Heat on Batman and His Allies in June!

Heading into the summer months, the Clown Prince of Crime has every intention of making things even hotter for The Dark Knight and everyone close to him as “Joker War” continues! Don’t miss any of the titles from Batman’s first major event of 2020!

Reeling from the effects of the worst Joker toxin attack ever, Batman is on the run through Gotham City, pursued by the dark shadows and voices that haunt his past and present! As The Joker’s plan materializes, the only person who can save Batman from the brink of true madness is… Harley Quinn?!

The Joker’s army is growing hour by hour, armed with weapons beyond anything the Clown Prince of Crime has ever used before. Batman must hold his mind together so he can strike the final blow and take back his city—but how can he heal the rifts he’s created in his life to get the help he needs? And while all this is happening, the villains of Gotham City are waiting out the carnage Joker has unleashed—and Catwoman assembles an army of her own!

The Joker knows Dick Grayson is Nightwing—and the plans he’s set in motion in will haunt Batman forever. Under the control of The Joker’s mysterious ally Punchline, Nightwing must battle the people he once loved most: Batgirl, the Robins, and…himself.

Cecil Castellucci and Robbi Rodriguez begin a new story arc, “The Last Joke!” Spinning out of the catastrophic history of the Gordon family, Barbara Gordon is forced to relive the most traumatic events of her life. James Gordon Jr. is back, and he’s on a mission to run the Gordons out of Gotham City—and as we all know, anything involving James Jr. is bad news for Babs and Commissioner Gordon. But is her brother capable of tormenting his family on his own, or has he teamed up with a certain Clown Prince of Crime?

As the story of Two-Face reaches it end, find out how The Joker has been the puppet master behind the torment of Harvey Dent! After years of schism, Harvey will find peace, but will that be in a chance for a new life, or in death? This final battle between Batman, Two-Face and Lincoln March will end with a shocking conclusion sure to split you in two!

Art and cover by BRAD WALKER and ANDREW HENNESSY

Additionally, Batman #89 and Year of the Villain: Hell Arisen #3 return to press for a Third Printing. Nightwing #70 Heads Back to Press for a Second Printing!

As excitement continues to grow for Punchline, the Designer, the Underbroker, Clownhunter and more, both Batman #89 and Year of the Villain: Hell Arisen #3, the two first appearances of the breakout character Punchline—The Joker’s newest partner and Batman’s latest foe—are returning to press for a third printing!

Batman #89 Third Printing, on sale April 1, featuring a minimal trade dress version of the cover by Tony S. Daniel, reprints part four of “Their Dark Designs,” written by James Tynion IV and illustrated by Carlo Pagulayan and Guillem March. As the mystery surrounding the Designer continues to grow, Batman #89 marks the debut of Punchline, making a tantalizing cameo in two panels.

Year of the Villain: Hell Arisen #3 Third Printing, on sale April 1, reprints the third issue of the four-issue miniseries, written by James Tynion IV and illustrated by Steve Epting and Javi Fernandez. In the issue, Punchline appears alongside The Joker, as the war between Lex Luthor and the Batman Who Laughs heads towards its climax.

And, as backorders continue to come in, Nightwing #70—the first issue in the journey to “Joker War”—has sold out ahead of its March 18 on-sale date and is returning to press for a second printing!

Nightwing #70 Second Printing, on sale April 1, reprints “From the Darkness,” written by Dan Jurgens and illustrated by Ryan Benjamin with a cover by Mike Perkins. In the issue, The Joker begins his plot against Ric Grayson, as DC heads towards the highly anticipated “Joker War” event.

“Joker War” starts with May’s Batman #95, but the Clown Prince of Crime’s deadly machinations will be seen in the Bat-books in the weeks and months ahead, as the story’s overture plays out in issues of Nightwing, Batgirl and Detective Comics. If the comics aren’t already on your pull lists, contact your local comic book shop and let them know you’re looking for these issues to be added!

For more information on Batman, Joker War or the World’s Greatest Super Heroes, visit the website at www.dccomics.com, the DC YouTube channel or follow on social media at @DCComics and @thedcnation.

Make sure to also check out all our most recent updates on Joker, Batman, The Flash and more right here!

THE FALCON AND THE WINTER SOLDIER FOOTAGE DESCRIPTION Next post