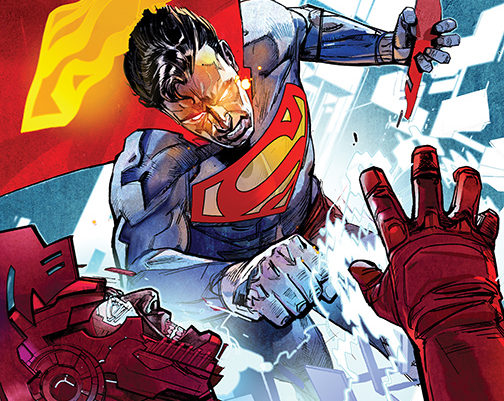 IT’S GOING TO BE A HOT SUMMER FOR SUPERMAN & SUPERBOY

It’s a Busy June for Superman and Superboy!

Now that he’s revealed his secret identity to the world, there’s no way things slow down for the Man of Steel! Heading into the Summer it looks like award-winning writer Brian Michael Bendis and a host of all-star artistic talent have every intention of keeping the heat on Entertainment Weekly’s “Superhero of the Year” all summer long!

In the pages of Superman #24 (on sale June 10), Kevin Maguire joins Bendis to tell a tale of Superman’s legendary susceptibility to magic, and how a new villain is about to use that to turn Big Blue’s life inside out and upside down. This mysterious character has come into Superman’s world to pit him against the most powerful sorcerer and agent for the Lords of Order: Doctor Fate!

Next, in the pages of June 24th’s Action Comics #1024, the fallout from Superman: Villains continues as Clark Kent steps out into the world as a reporter for the first time! Metropolis has been rocked by Lex Luthor’s latest attack and the drama surrounding Superman’s truth, and that gives the invisible mafia a new foothold to change the City of Tomorrow forever. Meanwhile, the Daily Planet is under siege!

Art and cover by JOHN ROMITA JR. and KLAUS JANSON

Also, on sale June 24, the Man of Steel makes a guest appearance in this next surprising chapter in DC’s saga of high-stakes espionage! Green Arrow’s team of super-spies—including the Question, Manhunter, Lois Lane, and Talia al Ghul—has infiltrated Leviathan! Along the way, they learn that one of their own is a secret Leviathan agent who plans to betray the new Checkmate from the start!

Art and cover by ALEX MALEEV

And just to show dear old Dad that the heat is on in the 31st Century too, Superboy makes a discovery about the future that will change everything he knows when he discovers a new Krypton! This new story arc also begins with the United Planets in a war that threatens to divide the League into separate camps, as Ultra Boy’s homeworld of Rimbor and Chameleon Boy’s homeworld of Durla declare interplanetary war!

Art and cover by RYAN SOOK

For more information on the World’s Greatest Super Heroes, visit the website at www.dccomics.com, the DC YouTube channel or follow on social media at @DCComics and @thedcnation.

Keep it locked right here for all the latest news and updates regarding DC’s hottest comic book titles!