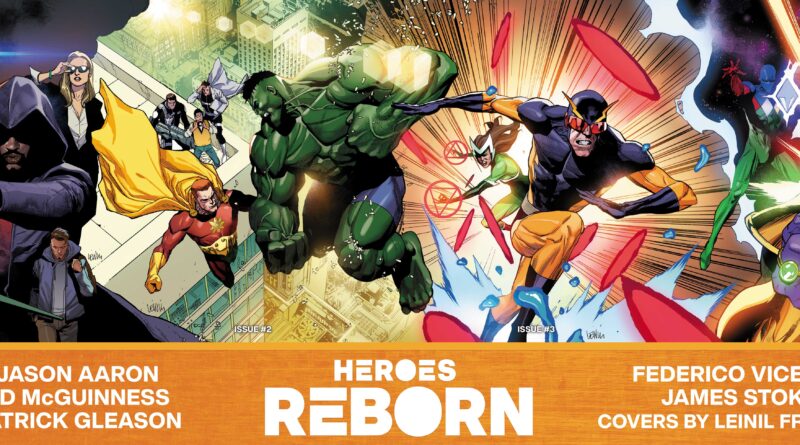 Last week, True Believers everywhere got their first look at writer Jason Aaron and artist Ed McGuiness’ extraordinary new vision for the Marvel Universe in the HEROES REBORN trailer. Now, Marvel Comics is proud to present Leinil Francis Yu’s covers for the first four issues of HEROES REBORN coming in May. The mystery behind this strange new world without Avengers will unfold across these brand-new connecting covers.

In this radical transformation of the Marvel Universe, the Squadron Supreme rise up to take the place of Earth’s Mightiest Heroes. But what’s become of familiar faces like Tony Stark, Peter Parker, and Carol Danvers, and what deadly new threats have emerged in the void they left behind?

Here’s what’s to come in the early issues of this unpredictable new series!

REBORN #1 will welcome readers to a world where Tony Stark never built the Iron Man armor. Where Thor is a hard-drinking atheist who despises hammers. Where Wakanda is dismissed as a myth. And where Captain America was never found in the ice because there were no Avengers to find him. Instead, this world has always been protected by Earth’s Mightiest Heroes: the Squadron Supreme of America. And now, the Squadron faces an attack from some of their fiercest enemies, including Dr. Juggernaut, the Black Skull, the Silver Witch and Thanos with his Infinity Rings. But why is the Daywalker Blade the only man alive who seems to remember that the entire world has somehow been…reborn?

In REBORN #2, make way for the adventures of Marvel’s Mightiest Megastar, the all-powerful Hyperion! When America’s solar-powered, super-sentinel of liberty looks to return his archenemy Victor Von Doom to the Negative Zone, mighty Hyperion must deal with a breakout of his most powerful enemies, such as Ultron, General Annihilus, and the Immortal Hulk. Plus: a special backup tale starring Blade, Earth’s last living vampire.

In REBORN #3, brace yourself for chaos magic at Mach 5! Blur, the swiftest mortal alive, must win a race through the mind-bending Dread Dimension in order to save his soul from the hypersonic hexes of the Speedster Supreme, the Silver Witch. Plu: a back-up tale takes us inside the dark secrets of the Ravencroft Asylum and its newest inmate, the Phoenix.

And finally in REBORN #4, Doctor Spectrum, equipped with the cosmic might of his Power Prism,  has become the most feared lawman in the heavens. But now the dark forces of deep space have sent the galaxy’s most notorious bounty hunter to end Spectrum once and for all. That’s right, here comes Rocket Raccoon! Plus: in a backup tale, the all-new Starbrand finds herself alone in a strange new universe.

“Maybe the wildest story I’ve ever put on paper,” Aaron said of his latest Marvel saga. “I got to cut loose on this and release my inner comic-reared child in a really profound way, and together with a cadre of immensely imaginative artists, we built a world that I’m pretty confident in saying is quite unlike any version of the Marvel Universe you’ve seen before. It grew out of the pages of my AVENGERS run, but kept getting bigger and bigger as it went, and the more pieces I put in place for this Reborn world, the more gleeful and excited I became. This project really stoked the fires of my love for comics in all the right ways.”

Prepare to enter a world without Avengers when HEROES REBORN launches in May! For more information, visit Marvel.com.