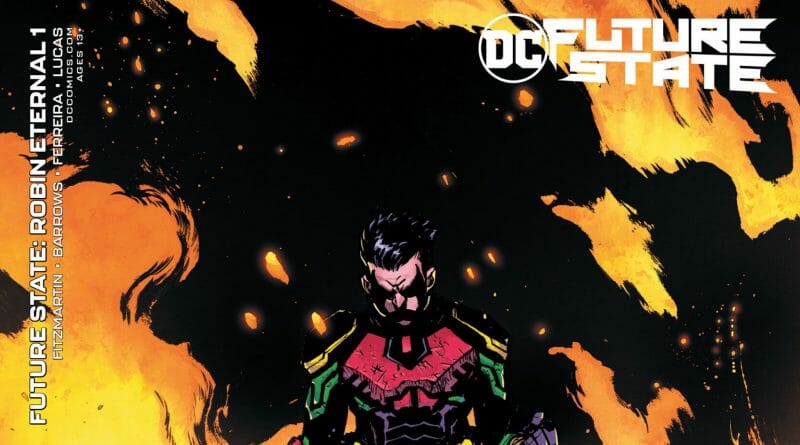 
TIM DRAKE is BACK! And it’s the Tim Drake we deserve! Future State does it again!

Find out how we have got here to (Future State) by reading Dark Nights: Death Metal issue 7 or click here to check out our review.

Gotham is under the rule of the Magistrate. Vigilantes are the criminals now in the eyes of the government. But this this will not stop our heroes from making a difference in their city. Tm Drake AKA Robin is proof of this, as he stalks his prey to further the Bat-Families fight for justice. Future State: Robin Eternal is such a great issue. Writer Meghan Fritzmartin and Artist Eddy Barrows have crafted a Tim Drake story worth its weight in gold! It brings the best parts of (my favorite Robin) Tim and bring them to the forefront.

The last time I read anything giving Tim his shine was during James Tynion IV run of Detective Comics. With this title, he has to step out of the shadows of his brothers to help defend Gotham. And at this point, he’s probably the only one left to really do it. With his genius and skills, he learns of a tool that could spell utter doom for any masked vigilante not up to par. Fair to say even Tim has trouble with these Cybers, these robot soldiers can easily take any threat down.

Needless to say, this Future State first issue is solid. The story captured some of the best parts of Robin Tim Drake and what he’s capable of. Now getting a bit SPOILERY. The best parts of this Future State Robin Eternal has come from the tiny details about the current status of the Bat-Family. Dick is apparently locked up in Arkham asylum, which is a WOAH type of moment. Hope to see if this is prior to the events of the Future State: Teen Titans title or current. Jason decided to join up with the magistrate as well after “Bruce’s death”. Which is hardly surprising, Jason has always been fond of authority especially when he can dish out a harsh punishment. And of course, Damian is almost taboo in any future timeline. Either he’s following the path of Batman Beyond timeline or he’s going a whole new direction away from Gotham. But we all know he is not the current Batman at least.

The reintroduction of Stephanie Brown Batgirl was a great addition. Tim’s passed love interest has chosen to stay away from the mantle to try and live a normal life. As well as avoid seeing the ones she loves die. The plot of the story makes this all the better. Also bringing in a member of the We Are Robin movement from back in the New 52 days, they join in to stop a shipment of Lazarus Resin that would make the Cybers unstoppable. And of course we cant let that happen. So off on a suicide mission we go.

With their plan set they go off to do the deed. With and expected turn of already being caught at the very early stage of the plan, the foot soilders are made quick work of. Expected of the best Robin around 🙂 . The end of issue one came at a shock; the killing of Tim was not expected so quickly, but the odds were already stacked against them. But him coming back to life from the Lazarus Resin!! OMG it was amazing! Cant wait for the conclusion in issue 2. Totally get why its called Robin Eternal now lol.

Now the book is on the shelves still everyone, so go and check it out. It’s an amazing issue I didn’t even dive deep into how this world can directly go into Batman Beyonds timeline. We all saw the camo suit!

For more comic news and reviews make sure to keep it locked right here at The Nerdy Basement. And while you’re here, consider supporting us on Patreon. It’s a simple way of supporting us so we can keep on providing you with your Nerdy News!