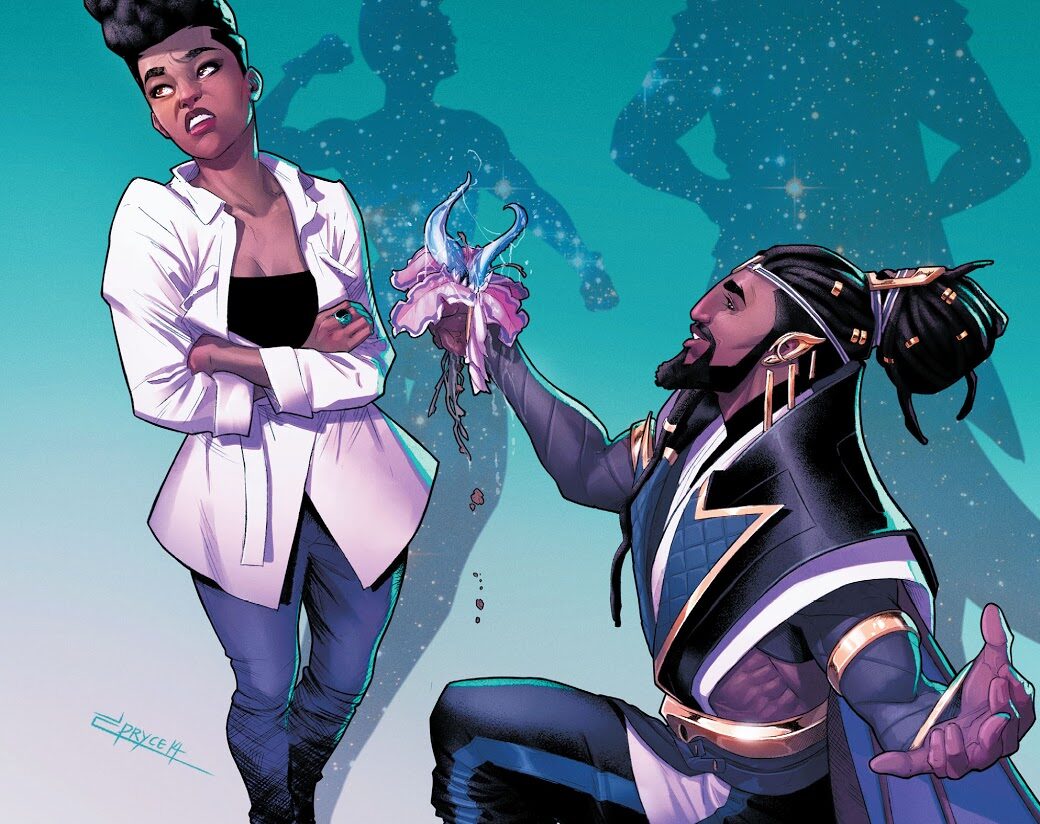 
After a brief hiatus, Far Sector #6 brings forth a somewhat unexpected hookup and Averrup’s capture while further hitting some real-life situations that have once again become very prevalent in today’s world.

*SPOILERS AHEAD FOR FAR SECTOR #6*

As we all know, it’s been a while since we’ve had some fresh new comics hitting the market since COVID_19 took over and caused the entirety of the world to shut down to cut down on the contamination. Which is why you’ve all seen a lack of reviews from The Nerdy Basement. Despite all that, I have finally been able to read one of the most exciting DC Young Animal’s titles currently on the market which is Far Sector by N.K. Jemisin and Jamal Campbell.

For those who aren’t up to speed with Far Sector, I highly recommend reading my reviews on Far Sector right here. For those who want a quick recap keep on reading. In the previous issue, we saw Lantern Mullein in the middle of a protest and having to defend said protestors after Councilor Marth ordered open fire on the unarmed protestors, which led to 12 deaths and 32 injuries. N.K. Jemisin also gives us a look into Sojourner’s past. Her childhood life, her childhood struggles, her life as a member of the military, a college student, a police officer, and her eventual termination as a police officer for reporting her partner to their higher-ups for excessive use of force which may or may have not killed a civilian. All of this leads to Mullein being found worthy enough and chosen to become a Green Lantern.

Ten days have now passed since the protest and Mullein has been trying her best to visit all of the funerals of the deceased. And while Mullein has not been welcomed to all, she is still reveling in what happened in the City Enduring as her and the citizens of the City Enduring await the referendum. During this time, the council has issued an official apology, they have started an investigation, but most importantly, no one at the council board has lost their job. A little too reminiscent of what is currently happening right now in today’s world. A little too on the money and it’s a bit eerie even though these are events and incidents that have been going on for decades, but I digress.

If we all remember Far Sector #3, we saw a flirty exchange between Lantern Mullein and Councilor Marth. Mostly due to him being high off Switchoff which another issue in this series entirely, which is also heavily tied to the double-murder investigation Mullein was hired to investigate. There’s a lot going on but N.K. Jemisin has been able to find a good medium in which to keep you interested in what’s happening in front of you, but also keep you informed enough to keep your interest piqued on the murder mystery that’s lingering in the background.

Councilor Marth has arrived at Mullein’s apartment in an attempt to “court” her. But to also express his grievance, regret, and guilt in what he allowed to happen during the protest, and to also inform Mullein that he is stepping down from Nah Councilor after the referendum. In the midst of their conversation, Marth reveals to Mullein why he takes Switchoff (“to reflect”) and what brought forth his change of heart (which has led him to resign from the Nah Council).

Despite not receiving any public blowback from the fallout of the protest. Councilor Marth is dealing with guilt and it has weighed down on him. The most important revelation of this conversation is that there was a precedent to uphold and Marth wanted to uphold the tradition as expected by the rest of The Council. Until it was too late. After the act is when Marth realizes that upholding the tradition of his colonizers (protesters were summarily executed) wasn’t the best approach.

One of the most recurring themes throughout this story is the suppression of emotions, dubbed the Emotion Exploit. It’s one of the main reasons the protestors were protesting. And the main reason Mullein was called up to the City Enduring. This IS their oppression. This is how they’re kept in check. The citizens of the City Enduring are no longer tolerating it and want out of the Exploit. There’s this constant inner turmoil within the citizens of the City Enduring, Lantern Mullein, and apparently even Councilor Marth. He explains how the Exploit feels and how in some ways the Exploit is comforting.

But it’s also a long list of other things that have to be taken into consideration when it comes to making certain decisions. Which leads him to question how can a leader of any sort makes any kind of decision if they do not know themselves emotionally? When emotions are so natural to all living beings. But despite the Emotional Exploit being used to maintain control. It’s evident that the same thing being used to control people is the same thing being used against them.

This all leads to Marth and Mullein finding comfort in each other and ending with their surprising but yet very expected hookup which was teased back in Far Sector #3.

Back in issue number five, Averrup allies himself with Lantern Mullein in order to start a deeper investigation into the Switchoff dealings which lead to Meile Thorn committing murder. Mullein meets Averrup at his yet undisclosed location, which is later revealed to be Platform Ever Forward. By the sounds of it, its not a fun place to be, especially if you’re a keh-Topli Councilor.

Lantern Mullein is then attacked by the Cloud Kratocracy. A race of beings that were believed to be completely wiped out of existence. Long and behold, Lantern Mullein discovers that Councilor Averrup has been captured and is now being held hostage. And in the words of the wise Sojourner Mullein, “you done f****d up now!”

This is another solid entry for the Far Sector series and now that things have finally started to unravel, the anticipation and the mystery in the series keeps on building. My only grievance with the series still is that its a really slow burn in terms of having the story unfold. It took five whole issues to really get to the nitty-gritty of the story and for us to even get a glimpse of the backstory of our main hero.

As I mentioned in my previous review, I think we got all the background story of Lantern Mullein we needed, but I feel like there’s so much more to explore in regards to her past. I also want to see more of her in action and to see how powerful, but yet how limited she is while using her ring. Even though we’ve seen her do some incredible stuff with her ring so far, being six issues deep, I think the pace really needs to start picking up.

I’m going to be patient though because the payoff might be worth the wait, but I’m afraid that prolonging certain plot points might deter away certain readers. I have been guilty in the past from dropping a series for not really presenting anything in the first 5-6 issues. Now that’s not saying N.K. Jemisin isn’t delivering because she is, it’s more of a pacing issue where it feels like it’s a little too slow at times.

Either way, I highly recommend Far Sector and I hope you are all enjoying it as much as I am.

For more comic book news, updates, first looks, and reviews make sure to keep it locked right here at The Nerdy Basement.