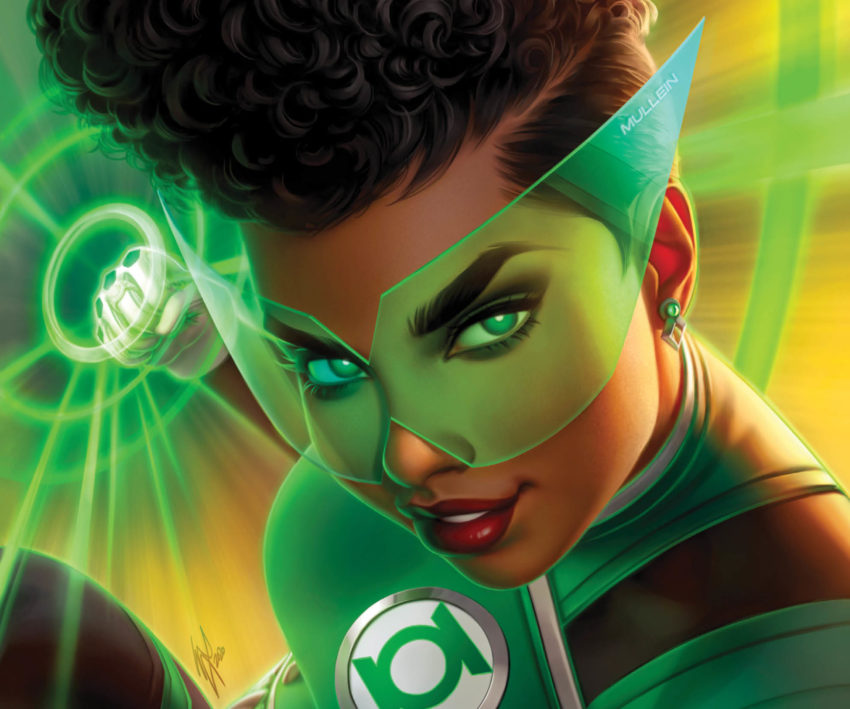 Far Sector finally dives into SoJo’s past and how she became a Green Lantern!

The plot still thickens in Far Sector #4 as one of Tillij’s enforcers has been quietly doing his research on Lantern Mullein and is now looking for a way to essentially eliminate her. The intriguing part of this revelation is how we learn how powerful Lantern Mullein has but how limited she is in terms of that power she has acquired.

By being compared to other human Green Lanterns like Guy Gardner and John Stewart. There’s a subtle difference in her Lantern Ring as opposed to the aforementioned Lanterns. Mullein’s ring slowly replenishes itself thus removing the need for Lantern Mullein to carry around a Lantern Battery or travel to Oa to recharge her ring and/or battery.

On the flip side, her ring isn’t as powerful as the rings in the possession of Gardner or Stewart. Once her ring is drained of its power she’s extremely vulnerable and therefore powerless. But we all know that a Green Lantern’s true power lies in their sense of will. So while she might lack where the other Lanterns don’t. Her will and overall determination to fight the good fight will keep her going in the fight for as long as she needs.

Now that I have given you the summarized version of Far Sector #4 let’s get into Far Sector #5. As I mentioned above, Far Sector #5 finally dives deeper into Mullein’s past. All the way from childhood and leading up to when she is chosen to become a new Green Lantern.

The flashbacks to Mullein’s childhood and life before becoming a Green Lantern comes in the form of a self-reflective moment. Mullein just like each and every one of us in the real world wants more than what we have or were given during our childhood and life in general. More than the cards we were dealt with. We just want more. No matter how good or how bad we have it, we all want more.

This specific moment in this issue hit close to me personally. I’m sure many of us who are reading this issue and those who are even reading this review right now can relate to that. But I really connected with this moment because that’s where I am in life right now, and always have been really. I’ve always wanted more and have worked hard to always have more than I’ve had before.

Granted I didn’t have to deal with the separation and eventual divorce from my parents like Mullein did. Nor did I get randomly chosen to become a Green Lantern either (cries internally), but I digress. Even events like 9/11. A historic event that was felt around the world is something I experienced as a child through the news and the media. Plus experiencing how the world itself changed after that event is something I have experienced as well.

And while you might not notice it right away. One of the scariest moments in American history truly does shape the way you look at the world surrounding you. It’s events like that that do mold you into the person you are today. Including the many difficulties, we’ve faced at home.

Lantern Mullein has been through a lot. Facing trauma at home. Facing racism. Facing ignorance for doing the right thing. Mullein was essentially at her lowest of lows before becoming a Green Lantern. She knows what it’s like to be down and out. What it’s like to be looked down on. Feel less than. And that is why she fights.

Jamal Campbell’s artwork goes without saying. He kills it and even exceeds my already set expectations with every issue of Far Sector. His artwork is just a pleasure to look at. I can’t wait to learn more about Mullein’s past, even though it seems like we got all the background story we needed for her…at least for now. But I’m completely open to seeing more about her past.

We learn a really interesting tidbit that sets up Far Sector #6 perfectly. The mystery behind the murder case just got even crazier. And Lantern Mullein has also found an ally within the council. I can’t wait to see how this duo will bring forward the good fight and solve this case in the coming issues.

Far Sector has had a slow buildup but things are finally coming to a head and it’s been a really solid story thus far.

Also, check out ComiXology to get your issues digitally if your local comic book shop is closed for the foreseeable future.

If you want to further discuss Far Sector with me make sure to head on over to Instagram or Twitter and shoot me a tweet or DM with your thoughts on Far Sector.

Mullein takes no s**t from anyone and that's just badass.