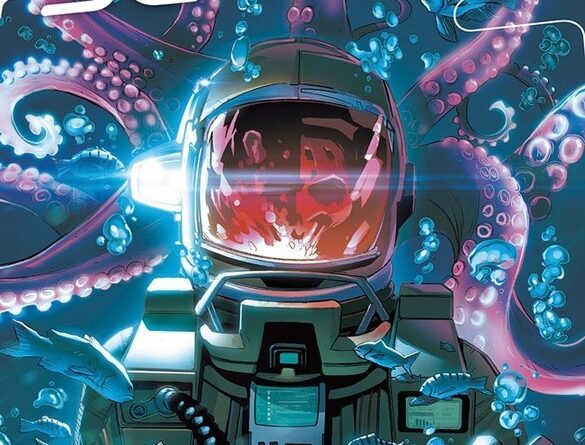 
Deep Beyond #1’s great pace and amazing artwork, complemented with a beautiful color palette make it one of those must-read comics this month

Deep Beyond is a horror mystery written by Mirka Andolfo and David Goy with art by Andrea Broccardo, with colors from Barbara Nonsenzo. It’s been quite a while since I’ve reviewed anything from Mirka Andolfo and since this is a brand new series she’s writing along with David Goy, I wanted to jump on it.

Especially after reading Mirka’s super hot series Mercy, which if you haven’t read by now, I highly recommend it. So whether you’re new or rather familiar with Mirka Andolfo’s work, that’s also including the rest of the creative team behind this series, you are in for a massive treat. More so if you’re a fan of horror and thrillers.

Right off the bat, I want to highlight the artwork by Andrea Broccardo. While I deeply wished that this series was illustrated by Mirka herself, that’s mostly due to her unique sense of visual storytelling when she’s writing her own stories. Broccardo’s artwork finds a nice medium ground that not only complements Mirka’s storytelling but also standing out as her own which is the best part about this.

The world feels familiar but it is also unique. The sea creatures and the way the humans are infected are heavily reminiscent of Mirka Andolfo’s Mercy but with a deep-sea horror twist that just makes your skin crawl. While the first issue does take a while to really get going, it does a pretty good job at building its mystery while also keeping you engaged enough and interested enough to keep on reading until the said mystery is revealed.

And while not all secrets are revealed in this first issue, there’s more than meets the eye with Pam’s wife, her apparent twin sister Jolene and the anomalies she’s been investigating. Additionally, the post-apocalyptic like setting we find our characters in. While things look all peachy keen on the surface, what lies beneath is truly the horrific underbelly that unfortunately needs to be revealed.

There’s a moment in this first issue of Deep Beyond that was heavily reminiscent of Andrew Ryan and Bioshock. This entire first issue for that matter gives me heavy Bioshock vibes. Whether or not that was entirely intentional remains to be seen. I’m hoping that I can one day snag an interview with Mirka to speak about this series and her upcoming ones in order to pick her brain a bit to see what inspires some of her stories. They’re truly amazing.

Backtracking a bit to the start of the issue where we first meet Pam (unnamed at that specific point in time) we hear the full message or rather her final message. We’re left to presume that she’s infected or at least eaten by the sea monster who attacked her submarine. Without giving too much else away. I’m hoping I gave little to almost nothing away to intrigue you enough to pick up this first issue but I thoroughly enjoyed this first issue and I’m anxious to see where it goes and how the mysteries start to unravel as we go along.

Great pace and amazing artwork, complemented with a beautiful color palette Deep Beyond is one of those must-reads this week, so make sure to add it to your pull list! Deep Beyond #1 is available this week at your local comic book shop and online retailers. Check out the covers for Deep Beyond #2 due out in March.