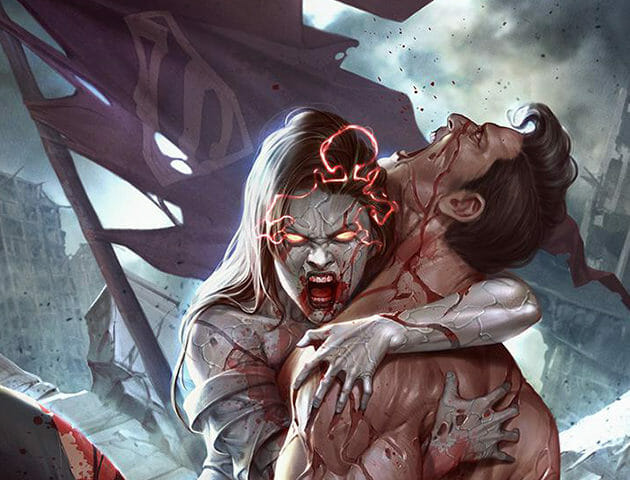 Hot off the heels of the legendary, Injustice epic (2013-18), Tom Taylor re-enters the DC sandbox to give us DCeased (2019), easily one of the best mini-series’ of the year. While somehow more depressing and cynical than the Injustice Universe, Taylor and artist, Trevor Hairsine, manage to inject these six glorious issues with brutal heartache, laugh-out-loud moments and presents some absolutely epic-scale panels for characters across the DC pantheon. In this alternate dystopia, Taylor continues to ask the question – what happens when our greatest heroes, truly fall?

Before we go ahead, just note we are dropping MAJOR SPOILERS and there’s a ton of great and heartbreaking moments to get through so sit back and enjoy!

One of my favourite parts of this series, has actually been Taylor’s interesting utilisation of the Anti-Life equation. With so much pre-established lore based around the New Gods and the Anti-Life, it seems like a difficult task to make your own. At first, I thought that Darkseid’s ultimate goal had been reduced to (lets be honest) a typical zombie-virus – the 21st-century rage kind that you would see in 28 Days Later or Zack Snyder’s Dawn of the Dead. I wasn’t quite sure if I liked it or not. But come the last issue, it has filled in some gaps that helped me better understand what I think Tom Taylor was going for… and I love it.

After invading Earth and fighting the Justice League for an entire week, DC’s evil-incarnate, Darkseid, is finally brought to his knees. Compelled by the lasso of truth, the God of Apokolips agrees to leave Earth and never return. After he Boom-tubes away, Batman quickly realises that Victor Stone AKA Cyborg is the only League member missing.

For an eternity, Darkseid has been in search of the Anti-Life Equation, a weapon capable of ending the free-will of all sentient life and placing every living thing under its control. The villainous New God believes he has found the missing ingredient to his scheme – Cyborg. It seems Darkseid in this story possesses the actual Anti-life equation (unseen, but inside his blue Motherbox). He however lacks the means of spreading or broadcasting that equation anywhere that can effectively dominate life.. until now. 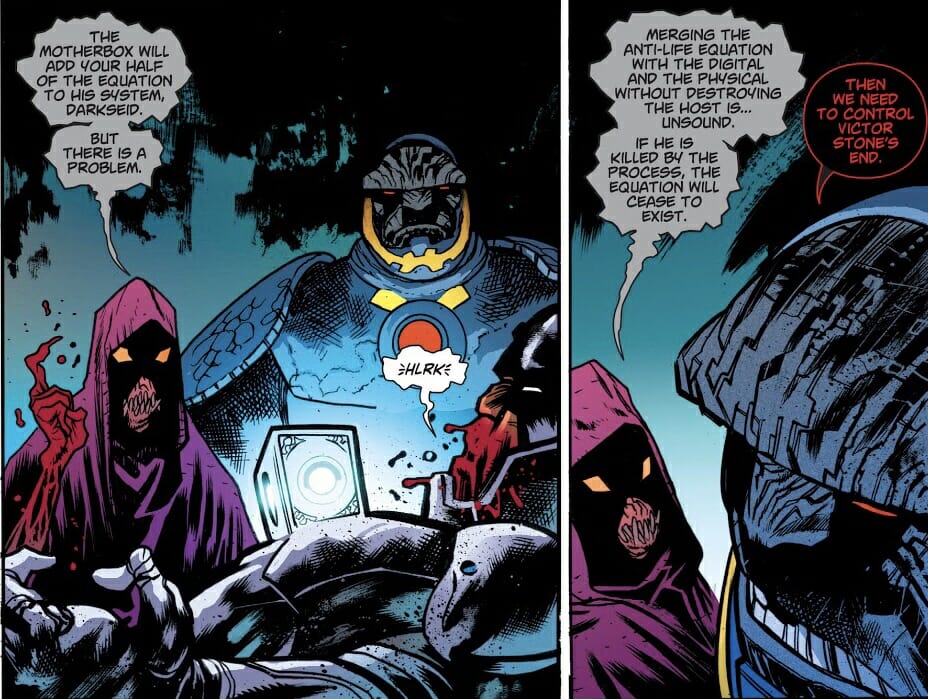 As Desaad explains in the panel above, Cyborg is both “the physical” and “the digital” – a biological life form whose constantly connected to the virtual world as well. Cyborg is therefore the near-perfect deliverer of the Anti-Life equation. The only problem for the God of Apokolips is Victor’s mortality – Desaad explains that if Victor as the host of the Anti-Life equation were too die, the equation would cease to exist.

In an absolutely unpredictable move, Darkseid summons the m**f**ing Black Racer – Death-personified and Grim Reaper of the the New Gods. To stop death from taking Cyborg during the merge, Desaad instead connects death with Cyborg (I assume making him immortal?) and sealing the unfortunate fate of this alternate universe. 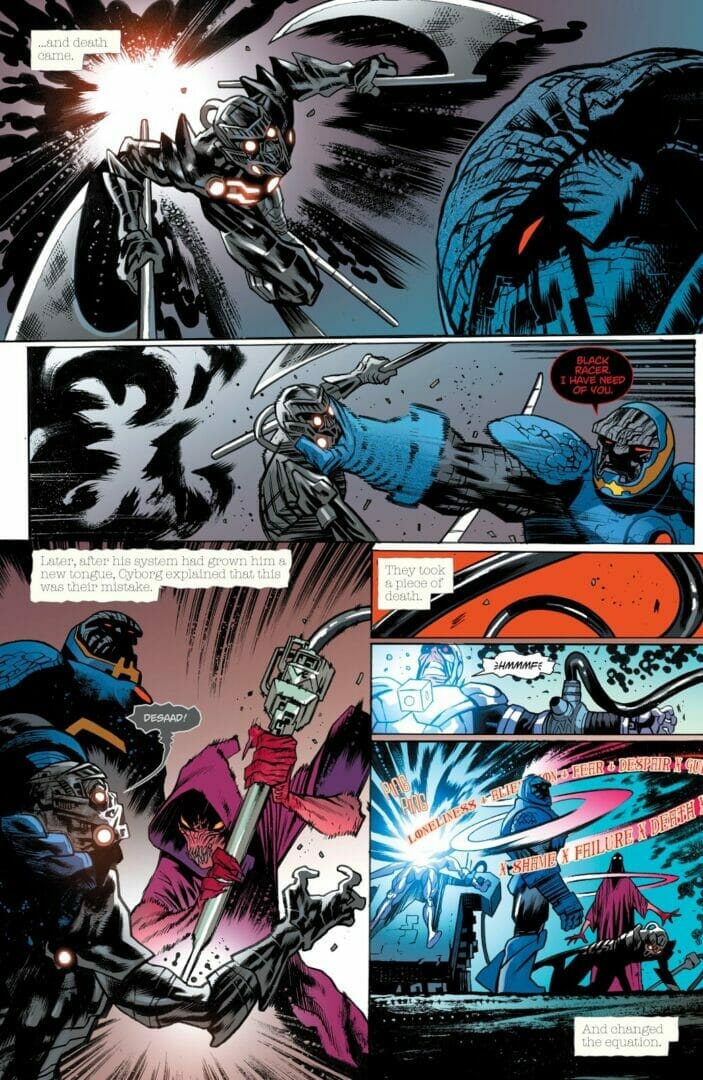 As the narration suggests, the Black Racer corrupted the equation. In the 4th issue, Cyborg describes this version as “A blight [-] an extension of the Anti-Life”. Due to Cyborg’s aforementioned connection to both the physical and digital, the Anti-Life virus is able to pass through blood contamination or digital imagery. It took me a while to realise that Taylor wasn’t depicting the actual Anti-Life equation that we know, but a corrupt and much more destructive version.

The corrupted Anti-Life spreads fast, first infecting the closest living thing in the room – Darkseid. In the ensuing panic, Desaad boom-tubes Cyborg back to Earth to get the Anti-Life away from Apokolips. Immune to disease, Desaad can only watch in horror as Darkseid succumbs to the equation, kills the Black Racer in a frenzy, before leaping into the fire-pits of Apokolips and destroying the nightmare planet for good. Unfortunately for us, Earth’s fall is much much slower.

Cyborg’s arrival on Earth spells doom for billions of people. His mainframe automatically connects itself online and instantly infects the internet with the Anti-Life equation. The Anti-Life disease is unwittingly spread to phone and TV screens all over the world, passed on to all who just happen to be surfing the internet at the time. Before Victor’s eyes, innocent bystanders begin to scream, contort and change into Zombie-like rage monsters, whose only goal is to spread the Anti-Life to all who haven’t yet succumbed to its control. 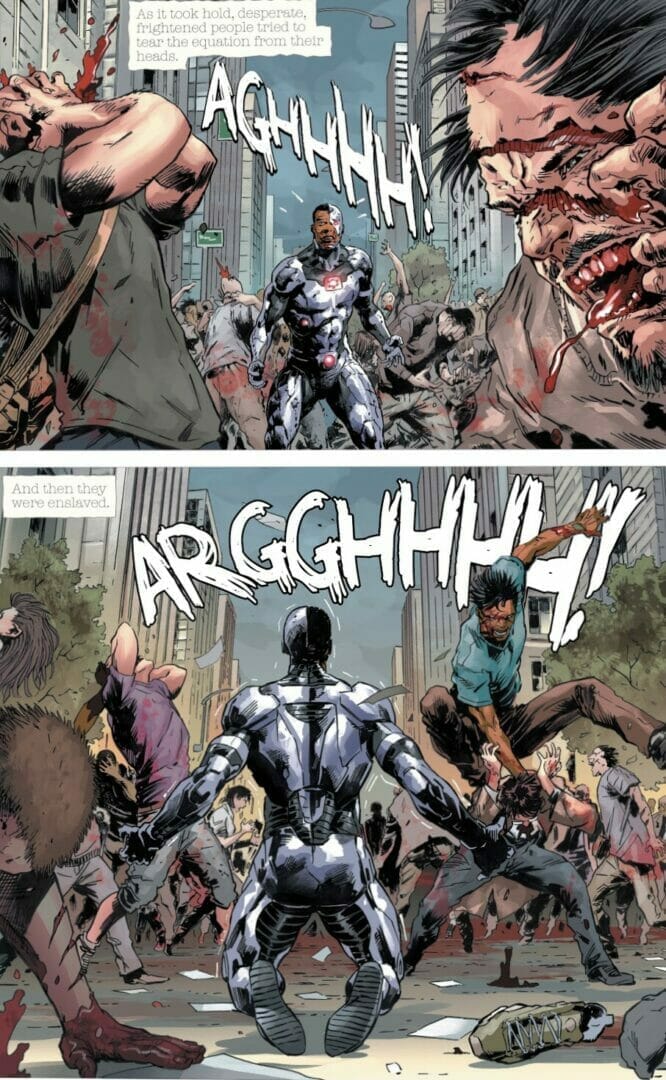 Simply.. the relentless violence shown by the infected and the sheer inevitability of the Anti-Life is terrifying. To make matters worse, the absolute resolve of characters like Superman, Batman and Black Canary (now a Green Lantern) tricks the reader into thinking any sort of happy ending is on the horizon.

The way the Anti-Life spreads through the digital landscape is not new, also seen in Grant Morrison’s Final Crisis (2008) when Darkseid’s followers spread the Anti-Life equation through all the world’s communication networks. In DCeased‘s case the equation itself is amplified tenfold, both the speed in which it spreads and what happens to those placed under its control. Aside from the typical damnation of social media and commenting on this generation’s reliance on technology, Taylor mirrors just how fast-paced and pervasive our digital world has become by doing the same to the Anti-Life virus. Within a week, the destructive force is able to take out most of the living world.

Taylor drops a final bombshell on the readers in the final pages of the sixth and final issue making this his most cynical and depressing story yet. With the virus having taken over most of the population, many of the Justice League’s heavy-hitters, and the Trinity itself, the entire Green Lantern Corps arrive to quarantine the solar system in an attempt to starve out the Anti-Life. The survivors are forced to relocate from Earth. Cyborg is left on the ruins of Earth with an infected Wonder Woman and takes the opportunity to use the Lasso of Truth to speak to the virus itself. Compelled by the Lasso, Anti-Life Diana explains that Victor’s Apokoliptian body was the cure all along – Man and machine, off and on, Life and Anti-Life, binary. Cyborg is then beheaded and seemingly killed before he has a chance to tell the survivors that Earth still had a chance. Ouch Tom, ouch. 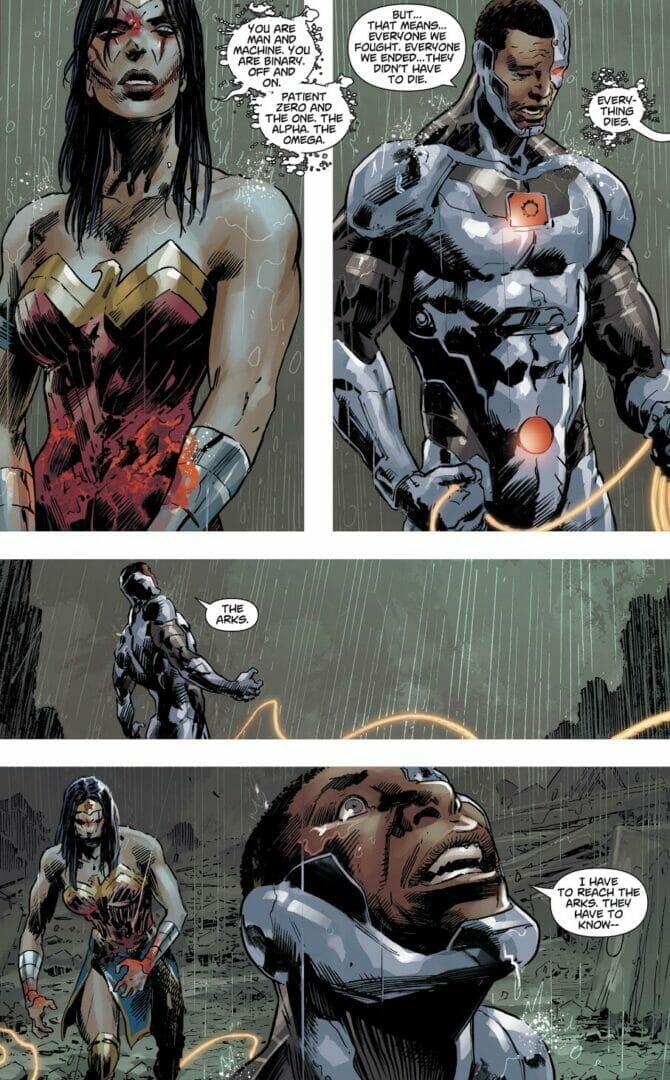 Here, Taylor proves he’s at at his best with absolute autonomy, complete control over the characters he’s writing and no reigns holding him back. Like Todd Philips’ Joker (2019), there is no pressure to connect this story to any sort of canon which means creativity is allowed to flourish. This series finally delivers the promise that Forever Evil (2014) was unable to fulfil: a world where the Justice League had truly fallen. This comic affected me.

Along with their incredible story, Taylor and Hairsine present us with an abundance of truly epic moments for a litany of different characters. I have no doubt that many of these moments will be remembered by DC fans for years to come.

In issue #2, Hal Jordan is infected with the Anti-Life while camping with Oliver Queen and Dinah Lance. After being forced to kill him with her most powerful canary cry yet, Hal’s ring chooses Dinah as its next bearer. (This gives credence to the final revelation that there was always a cure to the Anti-Life since Hal is completely infected, yet the ring stays active until Dinah kills him – The ring still recognises Hal as alive????) Aside from that, give me a Green Canary title yesterday. Dinah is amazing as a Green Lantern and officially takes the corps’ most-badass-leather-jacket award from Guy Gardener. 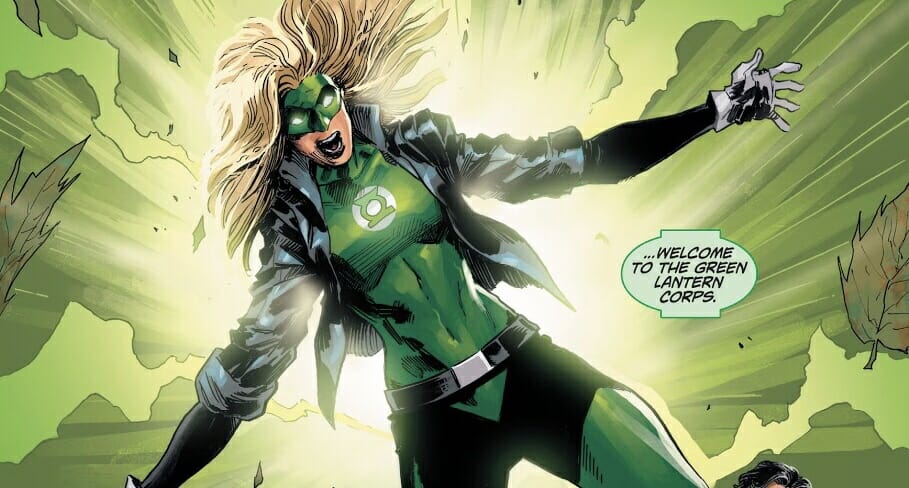 The Death of Batman

In the same issue, we get maybe one of the most heartbreaking scenes for any DC comics or Batman fan. Having found an infected Nightwing, Robin and Batgirl in Wayne Manor, Batman fights them off to save Alfred but is bitten multiple times in the process. To decelerate the diseases which has now infected him, Bruce gets into one of Mr. Freeze’s suits to give him enough time to contact the League and especially Damien. Batman confesses to them that he will die in a matter of minutes, telling Superman everything he knows about the virus and how best to fight it. We see Alfred standing behind Bruce with his head down, silently brandishing a rifle. Like the readers, many of the league don’t believe it – Na, this is Batman. He’ll find a way out of this? Won’t he? After a brief and an excruciatingly-short goodbye to Damien, Batman succumbs to the infection. Batman’s Batman carries out his last command. The image of Alfred walking away from the bodies of the Bat-family, denied time to grieve is truly soulcrushing. 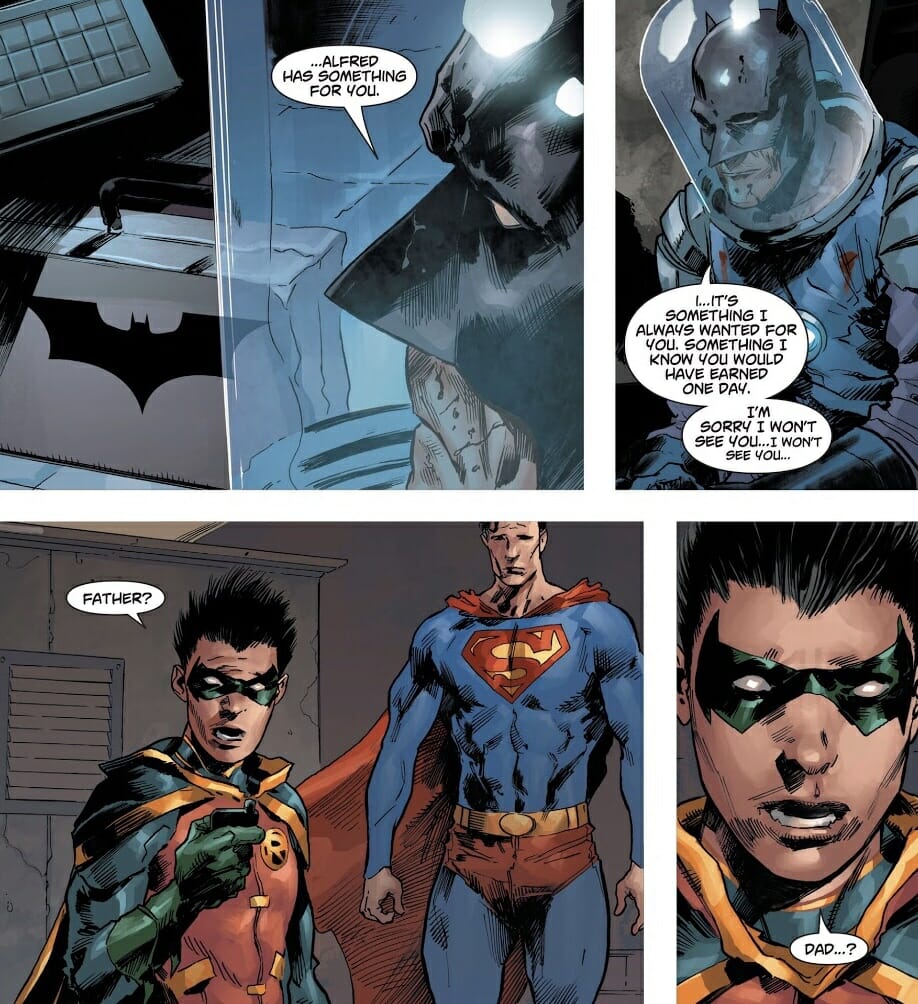 One of the more epic moments (however grim) comes from two historical DC characters that can be easily forgotten amongst the Leagues long membership. Captain Atom is seen under the employ of Amanda Waller, the military’s answer to the apocalypse. Beside an operating table with an infected corpse, Captain Atom explains to Waller that Ray Palmer (The Atom) is examining the dead body from the inside, trying to understand the biological make-up of the Anti-Life virus. Theoretically, Captain Atom is the perfect deterrent for a zombie virus since his atomic shell is impenetrable, right? Taylor would say one very small detail was overlooked. The explosion takes out Washington, Baltimore and Metropolis. BREATH-TAKING. 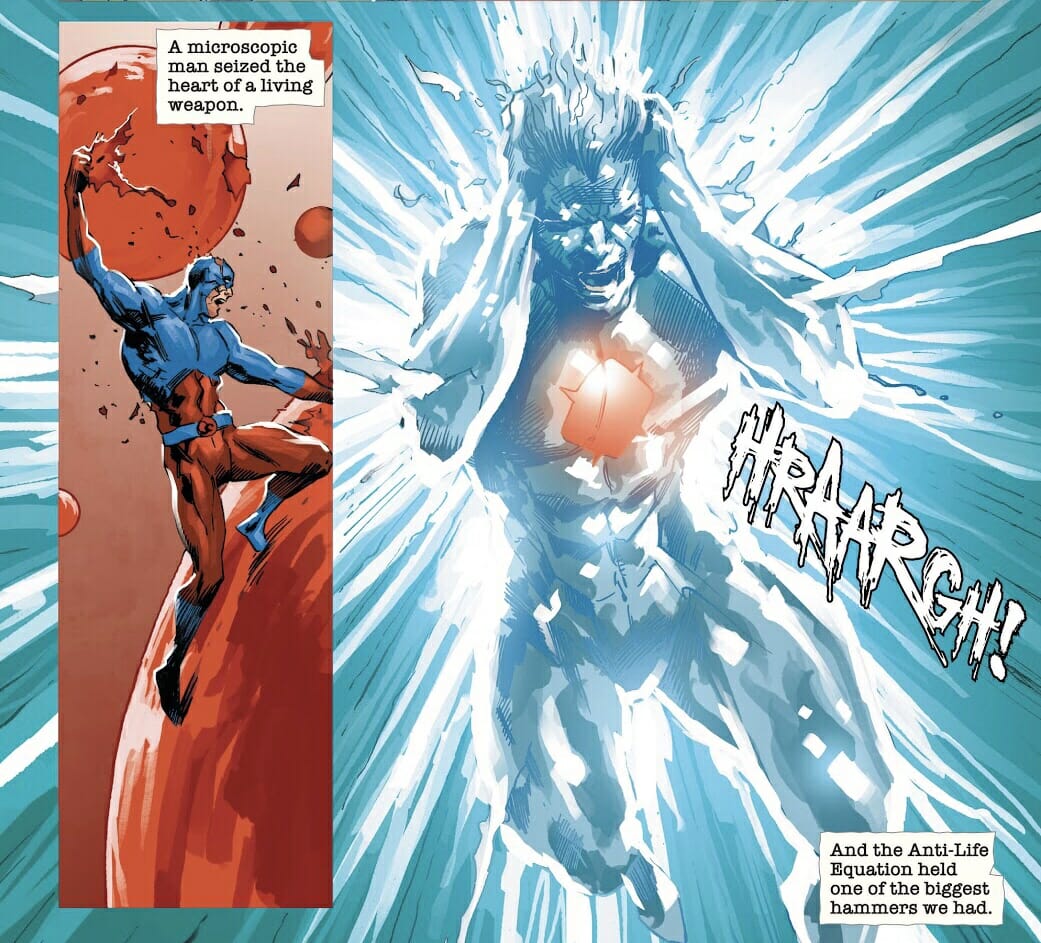 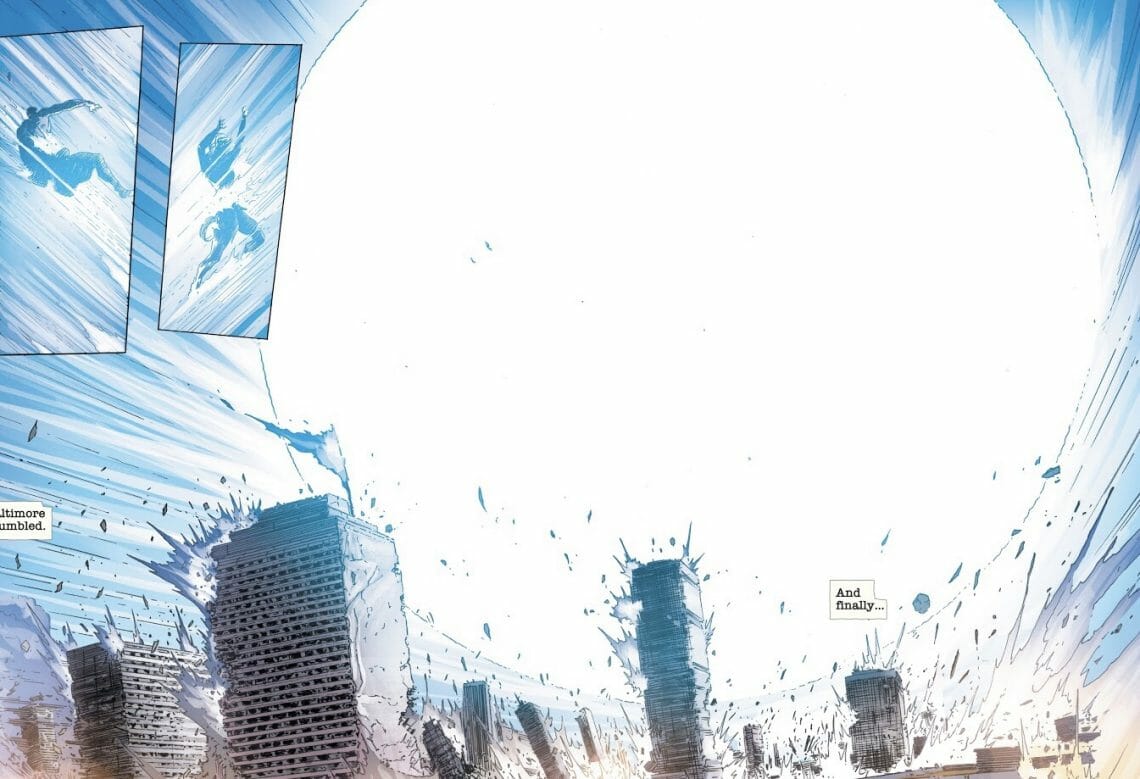 Superman Kills The Flash, Gets Infected

Firestorm is able to take the initiative and destroy an infected Martian Manhunter, but not before the Martian is able to infect Barry Allen. When Batman was dying, his warning to Superman was that the speedsters not contract the virus. If either of them were to get infected, this would spell the end of the human race. We see what Batman means, as a crazed Barry speeds through the streets infecting thousands of people per second. Superman knows he must stop him. He cant catch Barry, so instead will have to meet him head on. He does just that, reducing Barry to pieces as he flies through him. Unfortunately for Clark and the rest of the human race, the Flash was able to stab Supes with his fingers at the moment of impact, infecting him. It was already too much for Barry to be infected and have Superman kill him.. To then have Superman succumb to the Anti-Life virus after this was harsh. 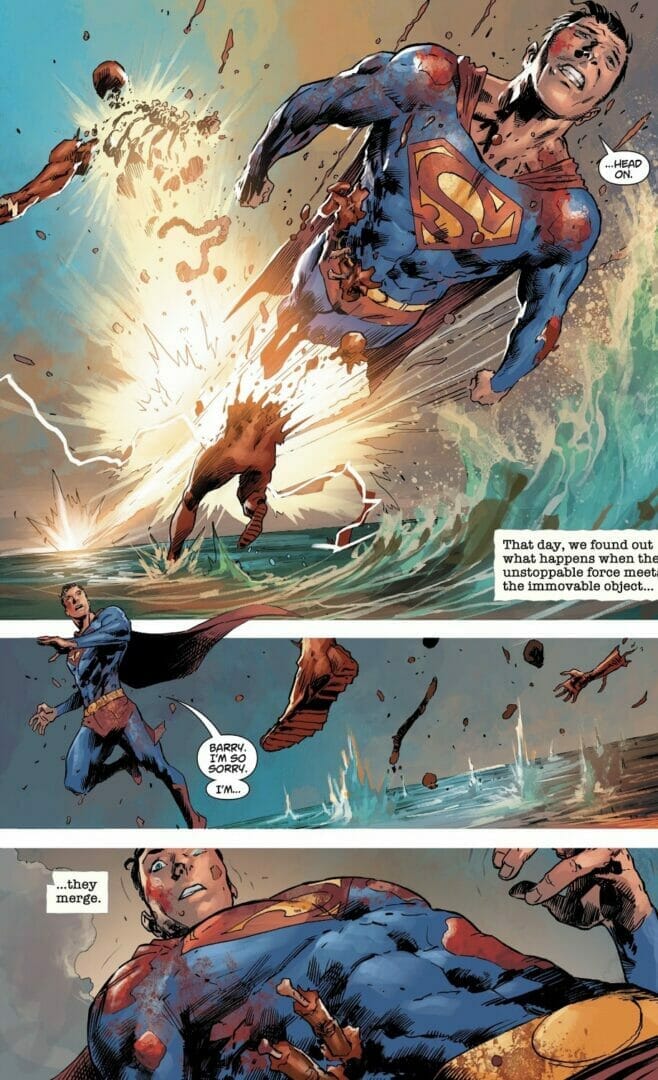 The story captivated the DC fanbase for its entire run. After the deserved success of Injustice, many wondered if Taylor would be able to replicate the magic. Me and this lengthy review are here to say, Damn straight. While utilising a full panel of Justice Leaguers, Taylor’s team are able to show no mercy to the audience – Killing off the heroes we have loved for almost a century in gruesome and horrifying ways. Tropes are thrown out the window as we get a true sense of stakes. DC comics have created a storyline with the Game of Thrones effect: You believe that absolutely anyone can die at any time. Reading this comic was an exhilarating experience. 9/10