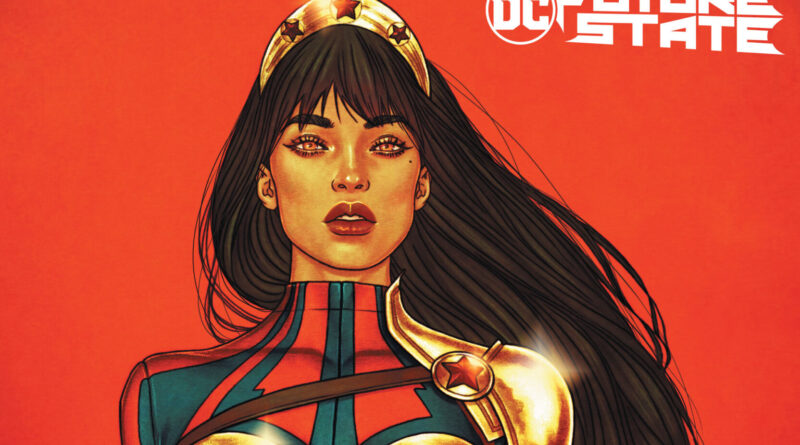 
Future State is coming in hot this week! Although Future State is what most folks will be looking for, we also have previews for Far Sector and The Dreaming Waking Hours. Check them out below.

The groundbreaking sci-fi series approaches its thrilling climax! Since arriving at the City Enduring, Sojourner “Jo” Mullein has confronted an insidious conspiracy of murder and mayhem, but even this most resilient Green Lantern reaches her breaking point when she uncovers an “emotional sweatshop” producing black-market feelings for a world without them. But Jo is only too human…

Harley Quinn has gained Jonathan Crane’s trust, everything is going according to plan, and she is getting close to making her escape. But Black Mask and his gang are continuing to undermine the Magistrate and push Crane closer to the edge, where he will become the Scarecrow once more. Will Harley be able to defeat the Scarecrow and stop the Black Mask Gang? If she’s going to secure her freedom and save Gotham’s future, she’ll have to!

Braincells, the advanced offshoot of the diabolical Brainiac, continues to lure Jonathan Kent down the wrong path—but things go from bad to this can’t get any worse when it appears it has also taken some manner of control over Supergirl! If the Kryptonians clash, nothing will be able to protect the bottled city of Metropolis! Meanwhile, inside the bottle itself, the Guardian is doing everything he can to stop the city from destroying itself from within, while Mister Miracle has discovered the trail of a strange signal that he doesn’t realize will take him to Warworld.

Humanity strikes back! The shadow of Swamp Thing Supreme stretches across the globe as it has for centuries. The world is at peace, until a rebellious faction of humanity ignites their terrible plan, fueled by Woodrue Wilson’s appetite for power. But Swamp Thing, too, harbors a secret—one he must reveal in order to restore peace to the planet once again. But it will cost him everything he has.

All hope is lost as Barry Allen races to save his former partner, Wally West. Armed with the weapons of the Rogues who once tried to destroy the Flash, Barry plots an attack that’ll either free the former Kid Flash from the evil that’s possessed him—or end his threat forever!

Future State: The Next Batman #3

The adventures of the next Batman continue! Batman has captured a pair of murderous fugitives, but he faces a tough decision: leave them for the Magistrate troops, which means certain death, or risk his life and fight his way through Gotham City to deliver them to the GCPD for trial. He’s Batman…so there’s only one choice! And in “Outsiders,” Katana has reunited with Black Lightning, but her old friend and ally has changed…big-time!

Now composed of literal black lightning, Jefferson Pierce arrives with a dire warning about Duke Thomas and his mission to liberate Gotham from the oppression of the Magistrate. They’ll have to work together—and we really mean together—to have any hope of defeating the forces working against them! Plus, in “Arkham Knights,” Astrid Arkham and her band of maniacal misfits have picked a fight with the Magistrate…and they’re not going to back down! On the eve of their mission into the heart of Gotham’s fascist occupiers, Croc, Zsasz, Phosphorus, Clayface, Harvey, and the rest steel themselves to try and shine a beacon of hope into the darkness—but not everyone will make it out alive!

Emerging from the Amazon rain forest, the new Wonder Woman must battle her way through hell! Witness Yara Flor at the height of her power as she takes on the king of the underworld, Hades himself! Betrayed by a close ally, Yara’s back is against the wall as she is forced to battle legions of demons for survival and to liberate her Themysciran sister. You won’t want to miss the exciting conclusion of this of rising superstar hero’s first adventure!

Harley Quinn and the Birds of Prey #4

There was no way Harley was going to make it out of Gotham City without coming face to face with The Joker…and just as she’s taken all his money, he’s determined to take something that means even more to her! This will be the most harrowing gauntlet of Harley’s life, and she-and you-are not ready for it!

In this final issue…it’s absolute rapture.

For years Kirk Langstrom has struggled with his monstrous alter ego, Man-Bat, and the serum that transformed him. But he’s finally hit rock bottom following a devastating setback, and he’s going to take his anger out on every single citizen of Gotham City. Will the combined might of Batman and the GCPD be enough to stop Langstrom once and for all? Or will this just be the start of Man-Bat’s devastation?

Bleeding out in a hospital bed from a magic wound that will not heal, sorceress Heather After must swing open the gates of reality to find herself a protector…but is she prepared for the deal she’ll have to strike once she finds a champion with the dangerous power she needs? And speaking of dangerous power…what happens when Matthew the Raven catches a glimpse of one of the artifacts Heather’s been hiding away?