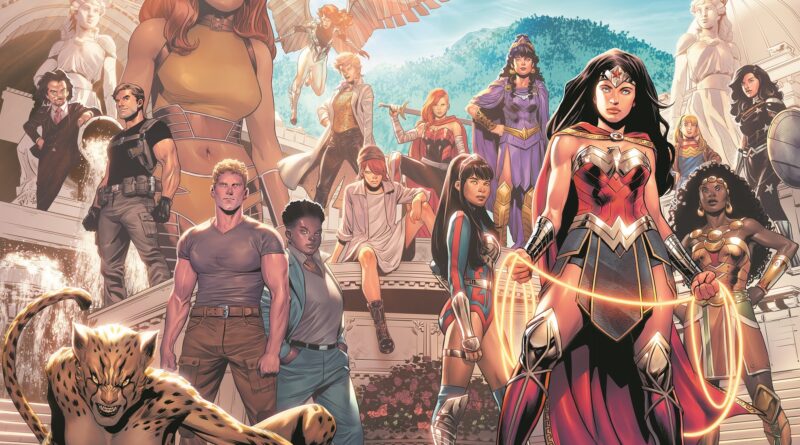 CCXP Worlds otherwise known as CCXP Brazil took place this past weekend and while no major announcements were made in regards to DC’s upcoming films, Wonder Woman 1984 being the only exception. A few panels took place during WB’s 6hr long takeover at the virtual con announcing new titles and talents for DC’s Future State event which launches next month.

Here’s what you missed:

Following both their story in Detective Comics #1027 and Bruce Wayne’s clandestine battle against The Magistrate in Future State: Dark Detective, award-winning writer Mariko Tamaki and artist Dan Mora will continue the adventures of the Dark Knight and his allies as the new team on Detective Comics, beginning with issue #1034 on March 24, 2021. Not to be outdone, award-winning writer Gene Luen Yang and superstar artist Ivan Reis continue the adventures of the “World’s Finest” in Batman/Superman #16, also on sale March 24, 2021.

New adventures featuring the Amazon warrior princess arrive on March 10, 2021 as co-writers Becky Cloonan, Michael W. Conrad and artist Travis Moore are the new Wonder Woman team, starting with issue #770. In this new story arc, Diana has to endure endless fighting – and partying(?) – as she tries to figure out why she’s in Valhalla, and why nobody seems surprised that she’s there.

On March 3, 2021, the Future State: Swamp Thing team of writer Ram V and Mike Perkins will be continuing the adventures of the Protector of the Green in Swamp Thing, a 10-issue limited series. Also on March 3, Peacemaker takes center stage, leading an Amanda Waller-controlled Task Force X in a new Suicide Squad ongoing series, by Future State: Suicide Squad writer Robbie Thompson, with art by Eduardo Pansica. This series starts off with a bang, as Waller sends Peacemaker and Task Force X to recruit its next member – Talon, the master assassin from the Court of Owls. Meanwhile, she has her own hands full as she tries to recruit – Superboy?

Class is in session on March 17, 2021, as the Future State: Teen Titans duo of writer Tim Sherridan and artist Rafa Sandoval join the original Titans – Nightwing, Starfire, Cyborg, Raven and Beast Boy – school a new generation of teenage crimefighters in a new ongoing series, Teen Titans Academy. Pay close attention, because one of these novice heroes will become Red X!

And this only the beginning! DC CONNECT #8, available on March 23, 2021 for free at retailers and via digital download and online reader (https://www.dccomics.com/comics/dc-connect-2020) contains more news from this game-changing two-month event, as it impacts more of the best writers, artists and DC characters in 2021! For the latest information on DC Future State, check out the hub page at www.dccomics.com/futurestate. For information on the World’s Greatest Super Heroes, visit the website at www.dccomics.com, and follow on social media at @DCComics and @thedcnation.