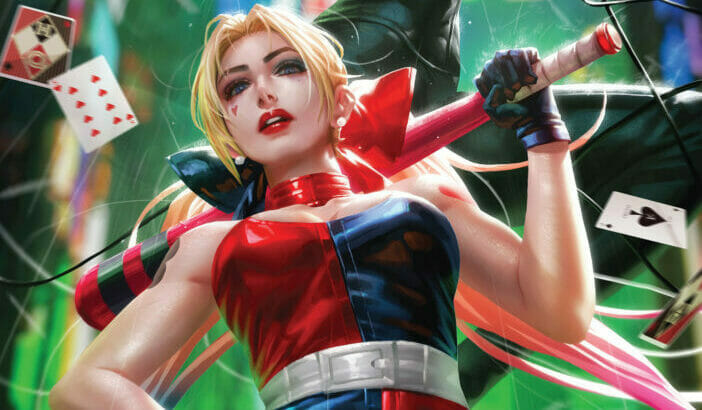 The Warzoons make their way to the doorstep of the Fortress of Solitude and only Lois Lane and the alien girl Thao-La are there to defend it. That’s because Superman is halfway around the world trying to stop the U.S. from declaring war on Atlantis. The Man of Steel must make a tough choice, and odds are, no one walks away happy. Elsewhere in Metropolis, Midnighter moves closer to the center of Trojan’s empire in the penultimate chapter of his backup adventure. The story finishes later this month with the Midnighter 2021 Annual.

It got the Riddler. It got the Penguin. It got Deadshot, Hugo Strange, Two-Face, Tweedledee, and Tweedledum. It has left carnage in its wake as it moves through Gotham’s villainous underworld, and Batman finds himself vexed by one very important question: Just what on Earth is it? Now the Dark Knight’s search for clues has him tracking The Joker. But wouldn’t it be funny if the mysterious creature stalking Gotham got to the Clown Prince of Crime first?

The dimension-shattering Archive of Worlds saga ends here—and reverberations from this titanic tale last long after the dust settles! As the Dark Knight and the Man of Steel work to halt the villainous Auteur.io’s plan here on Earth-0, the Batman and Superman of their respective archive worlds must team up with Alanna of Rann and El Diablo himself to save what’s left of their homes. Etrigan and his demon hordes rain Armageddon down on their pocket universes—and the fate of the World of Tomorrow and the World of the Knight hang in the balance!

All-new story! As the super-spies try to keep Leviathan from getting its hands on the Heroes Network, Lois Lane does her best to get to the bottom of the new truths in front of her. Meanwhile, her husband—the Man of Steel—has had just about enough of Leviathan. That’s right, finally! The man behind the rise of Leviathan, Mark Shaw, and Superman clash! Plus: Who is Mr. King really? Guest-starring Robin and Talia al Ghul! And Superman.

Batman rampages through the underworld of Gotham! Driven to a violent madness courtesy of the Jury’s Vile serum, the Dark Knight crushes bones, makes a scene, and gives costumed vigilantes in Gotham a very bad name. But will the Jury’s plan backfire? Can a violent rage machine packed with money, weapons, and an insatiable bloodlust possibly end well for Mr. Worth and his Jury?

That giant plunge from a building might be the answer… Backup: Countdown to Task Force Z: Part Two! When Red Hood shows up in your apartment, you know you’ve done something drastically wrong. Jason Todd teams up with Deb Donovan to uncover the mysterious disappearances in Gotham, and their search brings them to the missing body of Bane! Look alive because death seems to be knocking at the door…

Yer pal Harley Quinn is back again! Now, there might be a lot of new faces in Gotham, but it’s always nice to see an old friend. Okay, so Catwoman explicitly asked me not to call her my friend, but I know she secretly loves me under that tough, broody, leather-clad exterior. You’re not gonna wanna miss this one as we tangle with those boring Magistrate goons in Alleytown like a real dynamic duo! I smash a lot of stuff with my bat, and Selina does a bunch of flips and awesome things with her whip. She’s so cool.

Icon and Rocket: Season One #2:

Who is the mysterious Xiomara? She’s an attorney with a unique set of skills…and if you’re Raquel Rocket Ervin, she’s who you want in your corner when the United States government comes knocking on your door, asking questions about your friendship with the all-powerful alien known as Icon! A secret identity doesn’t get you far when every intelligence operation in the world is hunting you…

Mister Miracle: The Source of Freedom #4:

Shilo Norman is Mister Miracle no more! Left at his lowest point, Shilo’s fame status and name are violently ripped away. The legacy of the Miracle mantle is shrouded in dark secrets, and now, Shilo wants answers. Brought before a mysterious figure, Shilo learns tragic truths about his past, present, and possible future. But can Shilo handle these truths and regain his powers before it’s too late to stop N’Vir’s plans?

Robin reunion! Nightwing, Red Hood, Tim Drake, and Spoiler guest-star as they track Damian down with a plan to bring the young hero back to Gotham. Back to his family. But the son of Batman plans to win the Lazarus Tournament and refuses to return. What starts as a happy reunion quickly turns into a Robin rumble!

Fly into director Richard Donner’s Superman once more in Superman ’78! Written by Robert Venditti (Superman: Man of Tomorrow) and drawn by Wilfredo Torres (Batman ’66), Superman ’78 tells a brand-new adventure in the world of the beloved film. A bright, shining day in Metropolis is interrupted by a mysterious drone that crash-lands in the city and starts wreaking havoc. This looks like a job for Superman! But where did the metallic menace come from, what is its purpose, and who is Brainiac?

Jonathan Kent now dons his father’s cape, but can he be Superman and still have a normal life? It’s tough in this modern world. Danger is everywhere. The new Superman learns this the hard way on his first day of college, and a deadly attack forces Jon to step from the shadows and into the spotlight where his identity is exposed to the Truth, an activist news machine ready to upset everything. But first, the son still has some things to learn from his father and a few cool toys to inherit. Ask yourself, what would you do with your very own Fortress of Solitude? This all-new chapter in the legacy of Man of Steel has only just begun to reveal its surprises!

What happens when an indomitable force meets an irritating object? That’s what readers find out when Superman runs into Lobo. Think of it like a boy scout joining a biker gang. What will be worse, the damage Lobo causes on his own, or the chaos of trying to stop him? I smell a team-up, fanboys! Numen is the most popular being in the universe, a god clogging all social channels. And he does not like competition. This means Superman and Lobo must go.

Further complicating things is Dr. Flik, a scientist determined to study the last sons of Krypton and Czarnia respectively. What can she glean from the hero who lost everything as a baby and the bad, bad boy who made it all go away just for the heck of it? From writers, Tim Seeley and Sarah Beattie the team behind the indie hit Money Shot and Punchline artist Mirka Andolfo comes a hilarious new superhero epic!

Let the training commence! Now crowned Hera’s champion, Yara needs to start acting like one. Enter Eros, the goddess’s favorite grandson and the god of love. Can Yara resist his charms long enough to master her unpredictable new powers? All the gods are watching…are you?

Hot on the trail of Janus, Diana and her allies embark on a whirlwind adventure through the entire map of the Multiverse! Phantom Zone, Fifth Dimension, and Gemworld…oh my! Like the future, Janus’s path through space and time is unpredictable. Will Wonder Woman ever catch her? Or could this be the end of everything as we know it?! The tale behind Paradise Island’s creation continues as Hippolyta’s greatest regret is revealed. Can Diana forgive her mother for the past? And what does this revelation mean for the future of the Amazons?

You’ve been waiting for a Wonder Woman series like this! Our celebration of Diana continues with talent from all over the world paying homage to one of DC’s most iconic characters. This time around, our hero struggles with the memory of a lost love, battles a cult, loses her lasso, and more! You won’t want to miss this issue packed with timeless stories, just in time for the Princess of Themyscira’s 80th anniversary!