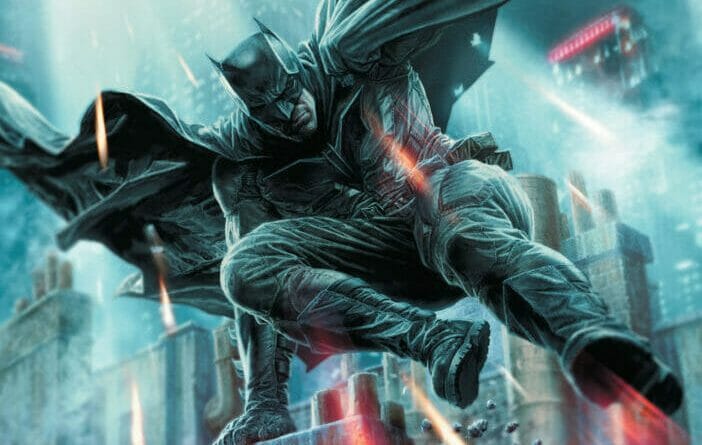 This past week brought some stellar issues like the visually stunning Batman Secret Files: The Gardener #1 revealing the origin of Bella Garten. We also got Jonathan Kent’s coming-out party in Superman: Son of Kal-El #5, the controversial issue that made Jon Kent aka Superman’s bisexuality canon. Let’s not forget the stellar new series Nubia and the Amazons! This week we have previews for every issue being released in the week of November 24th, including brief synopses for each issue. Since you’re already here, let us know what issues you will be picking up this week! Let’s take a look!

As Aquaman and Green Arrow work to piece together the mystery of the altered timeline, Scorpio’s General Anderton gets an upgrade of his own.

Batman and Killer Croc face off against Croc’s murderous offspring in a finale that has to be seen to be believed. The World’s Greatest Detective closes the world’s strangest case in the final issue of Garth Ennis and Liam Sharp’s twisted tale.

Catwoman’s attempts to keep Alleytown, and those around her, safe from collateral damage have failed. Simon Saint, the Wight Witch, Father Valley, and the Magistrate have all compromised her newly founded kingdom and brought her entire life to the brink. But despite Selina’s dreams of queenhood crashing down around her, there is still hope in the form of the Alleytown Strays. Could these children, trained by Selina, be her salvation? Or will they, too, pay for their involvement with Catwoman with their lives? And with Queen Ivy and Ivy aware of each other now, will they destroy the city or become one again?

The shocking finale to the DC spy event of the year. Everything is revealed…and only one will survive the showdown between Checkmate and Leviathan. Also, who is the Daemon Rose, and why does he have a gun pointed at Superman’s face? Plus: Mr. King’s identity revealed, as well as the reason he has sacrificed everything to bring Checkmate back!

The war for the very survival of the human race has begun! A mysterious new vampire lord has already put a plan in motion to conquer the Earth, and the first step is—destroy the Justice League! But the World’s Greatest Detective might be Earth’s last hope, and it’s time for the Bat-Family to hunt!

Deathstroke hunts the deadly Cheetah to the last place you’d expect…the legendary land of Che-terra, a storybook fantasy of Cheetah’s creation! To get to Cheetah, Deathstroke must hack his way past evil witches, murderous unicorns, and an army of cat warriors! Plus: Black Canary went undercover with T.R.U.S.T. to learn who was really pulling the secret organization’s strings, but she is not prepared for what she finds!

Batman and Mayor Nakano have freed themselves from the Vile parasite-infected sewers of Gotham City…only to find the nightmare has risen higher than they had imagined! With the city streets being overtaken by larger, (somehow even more) horrific creatures, these two enemies must put aside their differences and save the city—while there’s still time! This skin-crawling, heart-pounding, terror-inducing installment of Fear State will change the nature of the Dark Knight and Mayor Nakano forever, and cast an eerie shadow over the next major Bat-event to come… Then, in Foundations part two, Batman runs into an unlikely ally in his investigation at the Arkham Tower construction site, and believe us, Harley Quinn has a lot to say about all this!

Harley Quinn here, reporting live from Fear State! And let me just say…I’ve jumped outta airplanes, faced down the baddest criminals in Gotham, thrown punches at Batman, and filed my own taxes without instructions from the IRS, but reuniting with Poison Ivy to try to save all of Gotham…? Let’s just say I’ve got a little anxiety. I’m only one well-dressed and overly verbal former psychologist turned heroic clown, after all. Which is why I’ve teamed with the Gotham City Sirens to take down Scarecrow and…wait…why is Keepsake here? This couldn’t just be an easy, straightforward mission, could it? I blame the writer…

It’s time for a rematch! Robin and Connor Hawke face off for round two in their winner-take-all battle for League of Lazarus supremacy, but with the tournament nearing its end, what surprises does Mother Soul have up her sleeve? I hope it doesn’t involve that massive, hellish pit and the immortal monster lying within it—aw beans, it’s about that, isn’t it?!

Superman tries to assimilate into his new life in the bottled city of Kandor, but his heart lies elsewhere. Can Superman put his old life behind and find joy in what would’ve been his home, or can Lois Lane and Lex Luthor make contact with the Man of Steel and give him hope to return to his adoptive world?

After Task Force Z’s first bloodbath—err, sorry, first mission—goes awry, Red Hood must rethink how to lead a team of unstable monsters against some of the most organized ranks of Lazarus resin dealers in the world. To manage this unruly bunch, Jason Todd is going to need a deputy in the field whom he can trust to be his eyes and ears…but on this team, such an ask isn’t limited to the living. A ghost from Suicide Squad past returns in the cameo no one will see coming (that’s a clue)! Plus: Bane’s rampage, the Resurrection Twins get carried away, and more clues to the secret identity of the team’s benefactor!

Doctor Fate arrives to whisk the Flash away to the IN-BETWEEN, a two-dimensional causeway filled with demonic forces. Now it’s up to YOU, the reader, to help the Scarlet Speedster make his way through the dangerous dimension toward his final destination and the beginning of a brand-new adventure!

Written by Marguerite Sauvage, Liam Sharp, Christos Gage, Sheena Howard, and more! Art by Marguerite Sauvage, Liam Sharp, Kevin Maguire, Jamal Campbell, and more! Nothing gold can stay including this remarkable celebration of Wonder Woman beautifully presented in her signature colors! It all concludes, featuring our hero saving a life that will in turn save thousands, a superhero climate crisis, a body swap with one of her greatest villains, and more!