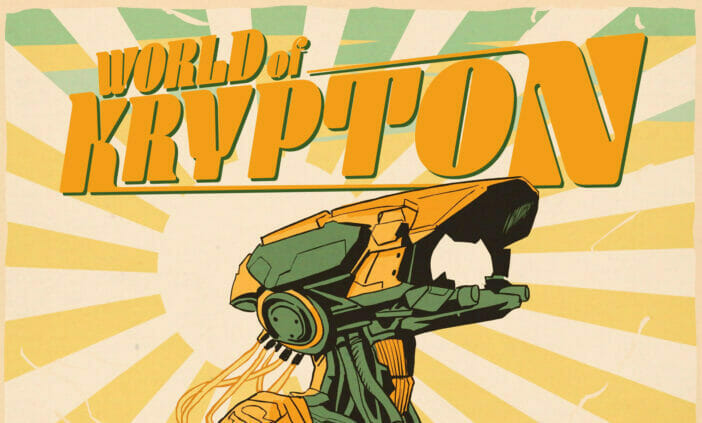 DC Comics has had a stellar year of releases with new storylines and exciting new characters stepping into the limelight like never before. We’re now heading towards the end of 2021 and our first week of DC Comics releases for the month of December. Tom Taylor’s Dark Knights of Steel #2 and World of Krypton #1 are our personal highlights for this coming week. Let’s take a deeper look at what else is releasing this week.

Arkham City: The Order of the World #3

Solomon Grundy has lived many lives over a great many years. Now, located by Ten-Eyed Man’s strange, but nonetheless effective, methods, he leads Dr. Joy and her many-eyed friend on a tour of the hidden history of Gotham City and the madness at its core.

Someone’s hot on Bruce Wayne’s heels, out to prove his connection to Batman once and for all! Meanwhile, Harvey Dent plans his next steps for Gotham with just the simple flip of a coin. What does he have in store for Gotham, and can Batman twist probability in his favor?

New creative team! Start of a new story arc as Batman leaves Gotham! Abyss part one! As Gotham celebrates surviving Fear State, Batman retreats alone into the darkness. But when he learns of a mystery involving Batman Inc., it forces the Caped Crusader to leave Gotham for a brand-new adventure! Thrills, chills, and international intrigue await! The Dark Knight begins a new story with superstar artist Jorge Molina and new writer Joshua Williamson!

It’s Crush versus Lobo in a knock-down, drag-out father-daughter brawl that might very well destroy Space Vegas by the time these two are done with each other!

The epic high-fantasy DC Universe adventure continues as a shocking assassination has the kingdoms on the brink of world war! From worldwide bestselling writer Tom Taylor (DCeased, Superman: Son of Kal-El) and acclaimed artist Yasmine Putri comes a generational high-fantasy tale of good and evil within the DCU!

Blorp, a strange creature with an unsettling affinity for the human race, has been unleashed upon an unsuspecting world. Now, doing its best to fit in amongst mankind-by assembling a human body for itself-this invader from beyond the veil has one mission…but what is it? And how can Edgar and his noseless pal Elk put a stop to it?

Both Justice Leagues arrive at the nexus of all realities, the Mirrored Room. Though they had hoped to find their old friend Amazo, what the League finds left behind in the ruins of the shattered mirrors is a far cry from the sentient android!

Who you gonna call? One-Star Squadron! Meet DC’s superhero team where heroism meets capitalism. This ragtag group of heroes led by Red Tornado is here to provide service with a smile. All you must do is send a request via their on-demand hero app and they’ll answer any call. Whether it’s a children’s birthday party or an alien invasion, no job is too small or too big!

The Suicide Squad barely manages to steal alien technology from OA only to find themselves cut off from their transport back to Earth and on the run from Lanterns and Thanagarians. And no backup is coming from Earth because Amanda Waller is under fire from her onetime ally, current-time enemy: Rick Flag!

HOMECOMING: Jon Kent’s first days as Earth’s new Superman have been a trial by fire. His actions have already put those he loves in harm’s way. He has stood strong in the path of constant attacks, but the immovable object is about to meet an unstoppable force. Lex Luthor—the man, the myth, the menace—returns to Metropolis.

The Joker Presents: A Puzzlebox #5

It’s all coming together! With the Riddler’s treasure hunt complete, the villains must gather to assemble the mysterious box. But putting that many criminals in a room is a dangerous thing…Unless that was the plan all along. And finally, the Gotham Police will hear Two-Face, Harley Quinn, the Penguin, and the Mad Hatter’s side of the story. But they all end with the same thing—Batman!

As the battle between Levi and Jacob comes to a head, the future of the Green—and so of all living things—is embroiled in existential conflict. And there are those who have learned to look for windows of opportunity in conflict. The true nature of Prescot’s machinations will become apparent even as their actions will put into question the very nature of the world we live in.

A modern telling of one of the most storied periods in comics! Krypton is a utopia admired across the universe for its achievements in science and culture, but its shining towers and regal people conceal a planet rotting at its core. When a catastrophic event befalls Krypton’s natural world, it points toward a mass extinction in the making.

Jor-El, head of Krypton’s revered Science Council, embarks on a mission to save a world that may already have passed the point of no return. Shining new light on the famous characters of Krypton’s past—including Jor-El, General Dru-Zod, and even a young Kara Zor-El—World of Krypton combines action, cosmic wonder, and political intrigue in a story as much about our world as the one on the page.

We hope you enjoy this week’s previews. Let us know which titles are you most looking forward to this coming week!