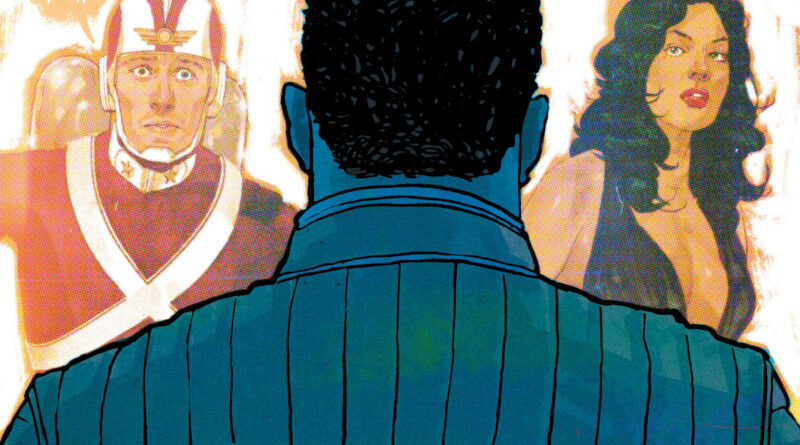 
DC Comics Previews For This Week Include All Future State Titles, Batman/Superman, Strange Adventures, and many more!

The all-new anthology series continues with new tales of mystery, mayhem and madness from all levels of Gotham City by some of the finest talents in comics. In this auspicious issue:

Eisner Award-winning collaborators Tom King and Mitch Gerads (Mister Miracle, Strange Adventures) tell a tale of Batman administering a form of last rites to a dying priest. Or is it the other way around?

Eisner-nominated storytellers Gabriel Hardman and Corinna Bechko (Green Lantern: Earth One) find the Dark Knight facing certain death—with The Joker his last lifeline. • Multiple award-winner for his innovative work on Hawkeye, David Aja writes and draws his first DC story, in which Batman is set on the trail of a deadly cult preying on Gotham City—and it’s one you’ll be talking about all year!

The brilliant Sophie Campbell (Jem and the Holograms, Teenage Mutant Ninja Turtles, Wet Moon) returns to DC after a 10-year absence to follow Batman and Catwoman on one of their greatest chases ever.

Celebrated artist of S.H.I.E.L.D. and Avengers and the creator of Paklis, Dustin Weaver makes his DC debut as Batman takes to the sky in a stunning aerial battle against one of the most unsettling foes he’s ever faced.

Harley’s pursuit of the Golden Age killer gets personal. Still in the fog of her discovery about Hector’s obsession, she relives her darkest memory of Jack’s transformation into The Joker—and her own early evolution into Harley Quinn. With Bruce’s counsel, she grapples with the guilt of her past and makes a choice that sends her straight into Starlet and the Producer’s den for an expertly staged showdown that will either crack the case or end her life.

When Jackson Hyde accepted the mantle of Aquaman, he didn’t expect to also have to mentor Andy Curry, Arthur and Mera’s teen daughter. Nor did he expect that he and Andy would get sucked into the Confluence—an interdimensional nexus that connects distant planets and galaxies through the One Great Ocean.

And he certainly didn’t expect to lose Andy in the process of trying to find their way back home. Now Jackson’s not sure how long he’s been stuck in a prison on Neptune (five years?) or how many times he’s tried to escape (200 at least!). But today Jackson saw something in the water that gave him hope for the first time in a long time—and his captors have no idea what he’s got in store for them.

Back in the early days of the Magistrate’s occupation of Gotham City, Bruce Wayne found himself pushed to the edge like never before. So calling the Man of Steel in for backup makes sense, right? Wrong. Gotham’s sinister overlords have already sprung the ultimate trap on the Last Son of Krypton…and with Kryptonian power at your command, no one can stand in your way! Plus…where on Earth did Professor Pyg get a Kryptonite scalpel? Brace yourselves, because things are going to get gross in the caverns below Gotham…

Bruce Wayne is supposed to be dead…but this Dark Detective is on the run and shining a light on the mystery of his own “murder”: How did the killers know Bruce Wayne was Batman? As the forces of the Magistrate zero in on Bruce’s location, it’s a race against time to unlock the secrets of their surveillance tech and take the fight to the very top!

But is the knowledge that Bruce’s own legacy helped to enable the greatest authoritarian force the city of Gotham has ever seen too much to bear? Also in this issue, Jason Todd is a haunted man. He’s working a job he hates on the violent streets of Gotham City as a mask hunter for the Magistrate! He takes contracts to catch villains—or heroes—and brings them in alive—mostly. But when the Red Hood gang reemerges, Jason must solve a mystery that could doom the city.

Whatever happened to the Legion of Super-Heroes? The team is no more, and the United Planets are in total chaos as one of the Legion’s own has turned on the entire galaxy! Everyone is affected…and not everyone survived! Ultra Boy tries to put the Legion back together to face the future head on! Find out the fates of all your favorite Legionnaires like Shadow Lass, Triplicate Girl, Brainiac Five, and Bouncing Boy. Plus, a shocking twist in the Legion mythology—and a long overdue appearance by the Legion of Substitute Heroes! It’s all here in a truly way-out tale by writer Brian Michael Bendis and artist extraordinaire Riley Rossmo!

The Suicide Squad enters the Future State era as Amanda Waller uses Task Force X to save the world and remake it in her image—but what happens when the team shows up to stop her? And in the second story in this extra-sized issue, Black Adam, the immortal one-time champion of the wizard Shazam, rules the planet Kahndaq in the 853rd century. Can he save the future from a threat rooted in the past?

Welcome to Lexor, home of the greatest businessman in the Multiverse: Lex Luthor! After years of prosperity, Lex’s utopia is at last ready to join the ranks of the United Planets and promote peace among worlds. However, Lex has never done anything unless he had something to gain from it. What could he be up to this time? Sounds like a job for Superman and his wife Lois Lane, the Earth representative to the U.P.! It’s time the Man of Steel shut down this former Metropolis magnate once and for all!

The battle against the Pykkts continues! The Justice League—including Green Lantern, Doctor Fate, Batman, the Flash, Superman, and Wonder Woman—has scattered across the Earth, pushing back the marauders wherever they appear. Even Mr. Terrific takes a break from investigating Adam Strange’s alleged war crimes to land a punch or two in their stupid alien faces. But Adam Strange has made his decision: to save Rann at any price—even if that price is the Earth itself!

At the edge of creation lies the Black Stair. From beyond it, from the Void of non-existence, He has returned. Mol Uhltep, The Last God. The God in The Void walks the world of Cain Anuun once more, bringing his apocalyptic prophecy of thirty years past to fruition. This is the story of those who failed to stop Him. The mortals who believed they could kill a god and protect their world from the cold embrace of unlife. Instead, they lie dead and dying atop the Black Stair as the world crumbles around them. This is how it all ends. The void awaits.

The Other History of the DC Universe #2

Before the New Teen Titans, there were the original Teen Titans. In the tumultuous 1970s, in an America that was very different than today but in many ways all too familiar, the trials and tribulations of these young heroes were witnessed by two of DC’s first Black superheroes: Karen Beecher-Duncan, better known as Bumblebee, and Mal Duncan—even if their versions of events are often at odds.

And across that decade, they fought for their seats at the Titans’ table while joining the battle against injustice. The long-awaited miniseries written by Academy Award-winning screenwriter John Ridley (12 Years a Slave, Let It Fall) and beautifully illustrated by Giussepi Camuncoli and Andrea Cucchi continues to look at the mythology of the DC Universe as seen through the prism of DC Super Heroes who come from traditionally disenfranchised groups.