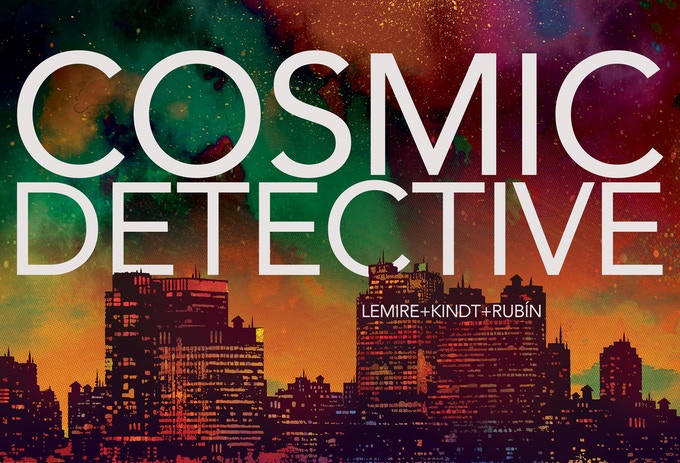 In COSMIC DETECTIVE, a God is found dead. Foul play is suspected. But who investigates the murder of a god? Not just anyone, that’s for damn sure. Enter our Detective. He’s got a wife, a kid, and a seemingly normal day job as a private eye. But for years, he’s been working for a secret underground cabal of shadowy figures, an organization committed to an uneasy alliance with cosmic forces beyond our imagining.

“Matt and I have had a chance to collaborate in the past, but never to create our own world and our own mythology,” said Jeff Lemire. “We wanted to make something weird and mysterious, a world filled with big ideas that we knew David’s insane visual imagination would thrive in.”

In COSMIC DETECTIVE, the murder of the god threatens to unhinge the gods and tear apart the very fabric of our reality. Only our detective stands in the way of utter destruction. But will the mystery he uncovers be worse than the disaster he’s trying to avert? And will his mind crack under the revelations he’s about to uncover before he can do anything about it?

Lemire and Kindt are longtime friends and occasional collaborators, and COSMIC DETECTIVE marks their first creator-owned collaboration. The story was written specifically for artist David Rubín and his widescreen, cinematic illustrations. Rubín previously collaborated with Lemire on SHERLOCK FRANKENSTEIN, from Lemire’s BLACK HAMMER Universe, and Rubín co-created and illustrated ETHER with Matt Kindt.

“We may live in different countries—with Matt in the USA, Jeff in Canada, and myself in Spain—but we have all met in person, and, more importantly, we all love to draw, to create, and tell stories,” said David Rubín. “The three of us have worked together before and we know each other well, both our strong points and our weaknesses. With COSMIC DETECTIVE, we’re doing all the things we love to do, and at the same time, forging a new path in our careers.”

COSMIC DETECTIVE will be presented in an oversized, deluxe format hardcover (8 ¾ x 11/58”), offering readers an immersive experience, with full-color art and multiple bombastic gatefold pages of art and story. This Kickstarter exclusive edition will include features that will not be available anywhere else after the Kickstarter is over – including exclusive art made specifically for this limited-edition volume. The COSMIC DETECTIVE playing cards are also a Kickstarter exclusive.

The COSMIC DETECTIVE Kickstarter campaign is live now at https://www.kickstarter.com/projects/1266952446/cosmic-detective-a-graphic-novel-by-lemire-kindt-rubin

While you’re here, check out our exclusive interview with Matt Kindt.

For more news and updates on all things comic book, make sure to keep it locked right here at The Nerdy Basement.