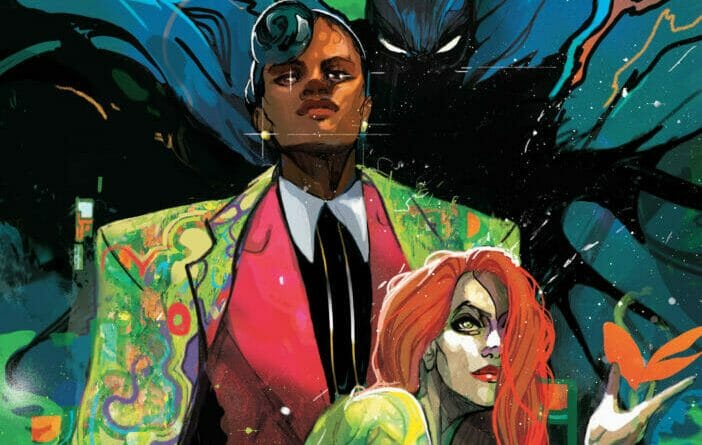 
Batman Secret Files: The Gardener #1 sprouts an origin story for Bella Garten and her deep-rooted connection to Poison Ivy

As much as this is an origin story for Bella Garten/The Gardener it is very much an origin story for Poison Ivy with a few retcons along the way. Bella Garten arrives in Gotham City to have a discussion with Batman and catches him on her past and how she became The Gardner but how she also watched the metaphorical death and rebirth of Pamela Isley into the super villainous Poison Ivy. Through Garten’s lens, we learn of Poison Ivy’s personal goals in wanting to save the world. How she wished that there was a way to get the world as a whole, humans, precisely, to understand the damage they were causing plants ultimately affecting the world around them.

In the process we are given a new introduction to Jason Woodrue who many fans already know, later becomes Floronic man, antagonist to Alec Holland aka Swamp Thing. We learn how Woodrue’s work with the government brought his small team of environmental scientists together which consisted of Pamela Isley, Alec Holland, his fiance Linda and Bella Garten. Garten explains to Batman how Woodrue ultimately drove a wedge between this team causing Alec Holland and his fiance to walk away from the group thus keeping their formula to themselves. Only to die in a fire a few years later, perfectly connecting this story to the origins of Alec Holland becoming Swamp Thing.

We also learn about how Woodrue sold Pamela the ultimate dream, Tynion also teases a sexual relationship between the two which in turn causes Bella to walk away from Pamela. In the process, get quick glimpses of Poison Ivy’s botanical transformation from botanist to Batman villain, only growing stronger with time and with her growth in power, becoming one with the environment and the plant life that inhabited it.

As Bella watches Ivy’s rise to power and the terror she causes around Gotham City, she retells Ivy’s encounter and love spark between her and Harley Quinn. How she taught Harley to rise up, stand on her own two feet, ultimately leading her to walk away from The Joker. Tynion simply confirms that an Ivy/Harley relationship is 10x better than her relationship with Joker and that in every way possible. These women truly love/loved each other and it has been a beautiful thing to see further cemented in comics. But we also see how this separation from Harley also broke Ivy and only pushed her further off the ledge.

Ivy’s separation from Harley only opened the door for her metahuman abilities to grow even stronger. But just a Bella is ready to walk away she is reunited with Ivy and she reveals to Bella how she can save the world. And that’s by using her pheromones ability to make everyone fall in love with her, allowing her to control them both mentally and physically; and manipulating them into doing what she wants them to do.

Bella informs Batman to help Ivy instead of locking her away. That Ivy isn’t like his other rogues who are hellbent on causing destruction and killing just because. Despite her villainous ways, Ivy’s wrongdoings come from a good place. She truly wants to help but because she is being stopped from accomplishing her lifelong goal, she ends up having to hurt those she clashes with and those who oppose her ideals. To really make Batman see her point, there’s a heavy emphasis on trauma and how trauma shapes everything it touches. Whether that’s Batman himself, Poison Ivy, or even a seed from a plant. How we are taken care of truly affects who we become later on in life.

After her conversation with Batman, Bella leaves Gotham City. She heads to her lab in which Ivy is staying and creates an artificial seed from all the good within Poison Ivy. Mostly to preserve the good that was once within her while simultaneously creating the monster she’s always wanted to create. A monster that will put enough fear into humanity, forcing them to preserve plant life. Fully planting the seed as to why Bella Garten calls her The Gardener.

Batman Secret Files: The Gardner #1 was a great read from start to finish. We do get a retcon to Poison Ivy’s origin story, albeit a welcomed one, we also get a worthy origin for Bella Garten and why she calls herself The Gardener. Tynion ties the origin of her alter ego perfectly to her past but also to her present, while also adding that extra layer that makes her motives that much more intriguing.

Christian Ward’s artwork is just stunning. The way he uses plant life to visually tell a story was astounding. His vibrant color choices truly make each and every page pop even the pages whose art aren’t all that great. But those moments are too far and in between to really distract from anything that is being presented by Ward’s art. There is an abundance of pages that I would literally hang up on my wall just because of how beautiful and vibrant the art and colors are.

Batman Secret Files: The Gardener #1 is available now at your local comic book shop and on digital. Make sure to continue with the story in Batman: Fear State: Omega.