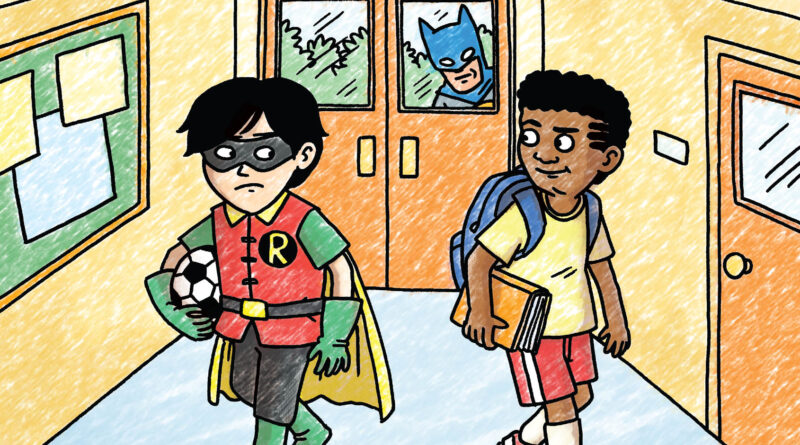 
DAMIAN WAYNE FINDS FRIENDSHIP, MYSTERY AND A SIDEKICK IN DC’s BATMAN AND ROBIN AND HOWARD

Always a sidekick, never the leading hero, Damian Wayne gets the spotlight in Batman and Robin and Howard, a new middle grade graphic novel announced today by DC. Written and illustrated by New York Times bestselling author Jeffrey Brown (the Jedi Academy series, Darth Vader and Son series), Batman and Robin and Howard is a hilarious, heartwarming tale that follows a young Damian as he starts a new school after being sidelined by his superhero dad—Bruce Wayne, a.k.a Batman.

Damian must navigate being the new kid while also learning how to be a regular kid as he attempts to make friends at Gotham Metro Academy. From the classroom to the soccer field, Damian is certain his new surroundings have nothing to teach him—so he is completely unprepared for the challenge he finds in Howard, the smartest and most athletic kid in school.

“It was really exciting to have a chance to make a book with Batman—a character I’ve enjoyed seeing so many different versions of—but it turned out what I enjoyed even more was writing a story that showed Robin’s character, beyond the sidekick surface,” said Brown. “I wanted to take these superheroes out of their element a little, show how they might struggle in the real world like the rest of us—or maybe show how the rest of us can have a heroic side, too. And when Robin meets Howard, I thought readers might see that a friendly rivalry can be better than a rivalry, but sometimes just being friends is the best.”

Batman and Robin and Howard is a funny story of rivalry, friendship, and mystery and hits stores everywhere books are sold on November 9, 2021. See below for the book’s official description.

Sidelined by a crime-fighting field trip gone wrong, Damian Wayne must refocus his attention on his life as an average student and must learn how to be a team player—especially when meets his match in his new rival, Howard.

To Damian Wayne, there is nothing more important than protecting the streets of Gotham City as Robin. But when he makes a critical mistake while out on patrol, Damian finds himself benched. And what’s more, Damian’s dad, Bruce Wayne—a.k.a. Batman—decides that starting over in a new school will be just the distraction Damian needs from his superhero routine.

Certain that Gotham Metro Academy has nothing to teach him, Damian is completely unprepared for the challenge he finds in Howard—the smartest and most athletic kid in school. The boys’ rivalry is instantaneous and fierce…and both are sure only one of them can be the best in their class.

What follows is a funny story of rivalry, friendship, and mystery from bestselling author and illustrator Jeffrey Brown.

Batman and Robin and Howard

Written and illustrated by Jeffrey Brown