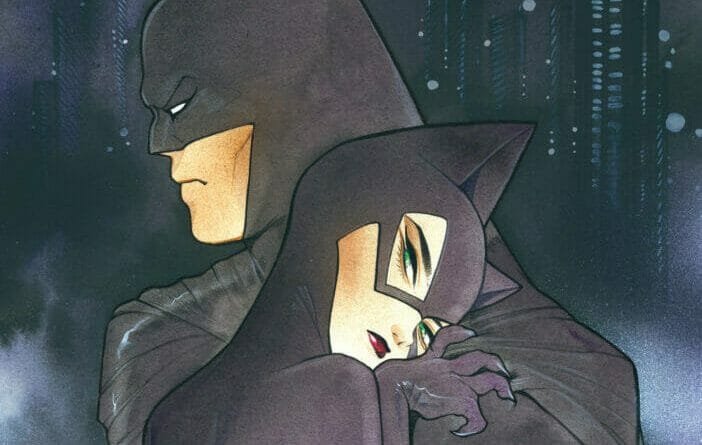 ‘Batman: Killing Time #1’ is written by Tom King with art by David Marquez. The premise of this series is a heist-gone-wrong and immediately you get the vibe that the premise is going to deliver. From the opening pages, and with help from the narrating captions, we are intertwined in a timestamped and well-planned story. Each of the times and locations crosses between Killer Croc in a bank, Selina Kyle teaching tennis, the newly appointed Commissioner Gordon, Batman, and The Riddler.

I’ll be honest, when I heard this was a heist comic, I got very excited. I love heist stuff with a ragtag team, double-crossings and a plan so wild you’ll never know whether it will actually turn out—and it usually does, just not according to Plan A. Another thing I thought about was how well-planned this story is, not in terms of the actual story, which is well-planned, but more the release. It coincides with Matt Reeves’s The Batman movie that releases on March 3rd.

This tale also coincides with the early days of Batman. We know this because the villains seem almost well-acquainted with each other, Killer Croc is on his first outing and it is the maiden fight between him and Batman. The Commissioner is newly appointed so we’re somewhere in the first few years of the Batman, maybe years two or three.

Chapter One: You Shouldn’t Have

The beginning of the comic centers around a security guard who works in the First National Bank, Julian Thaun. As the story plays out, you get a bit of back and forth of timelines: the present where Killer Croc is robbing a bank and the short time following where he encounters Batman; two adjacent timelines, one where Catwoman teaches tennis to and then terrorizes the bank owner’s wife, and the other with The Riddler alongside the bank owner himself (this is a plot planned out by the two villains); the hours or days prior that set up the robbery with Penguin and Julian Thaun; and then finally, the events after the bank robbery with all of the above. I won’t go through every step of the way here because I want you to experience the comic for yourself, but I will divulge the ending as I think it will lead to bigger things throughout the run.

Of course, The Riddler opens the mysterious and super-secretive Vault 5 without a worry and finds what he is looking for, all the while keeping the reader in the dark. When he exits the bank, Selina Kyle is waiting in a getaway car. Once again, Nygma reveals an even tinier box without showing its contents to the reader, and Selina Kyle is amazed by what they have succeeded in doing.

Earlier we got a brief glimpse of why Waylon Jones (Killer Crock) decided to be a part of this heist: he needed the money for skin grafts so his love, Vera, would want him again. Once the fight with Batman concludes, a waiter of sorts (belonging to Penguin) arrives at Vera’s door with a bag load of cash—Killer Croc is in Arkham and the cash is to wait until he gets out.

In the final pages, we go back to 405 BC to witness a priestess watch an Ancient Greece play called Bacchae. We are unaware of who this priestess is or will turn out to be but the captions echo the events as we turn the page and land back in the present with Penguin, Riddler, and Catwoman. Bacchae by Euripides tells the tale in which the King of Thebes is tricked and subsequently torn limb from limb, and, as you may have guessed, it’s exactly what happens to Penguin.

The Riddler smacks Penguin 46 times with his own umbrella, leaving him writhing and bleeding on the ground in front of the Wayne Memorial Statue. Chapter One ends with a familiar sight to all Batman fans: the Bat-Signal blaring into the sky as Gordon looks into the night and the Bat lands in the darkness behind him. Batman knows about Vault 5 and its contents but leaves the Commissioner, and the reader, guessing.

I prefaced this recap and review with the fact I love heists and, though I may be showing bias, this first issue did not disappoint. I really hope the villain team-up plus multi-step plan continues throughout the six-issue run. It is uncertain where this story is headed exactly but I am in the camp of mysterious and ancient magic. The mystical side of Batman lore has more often leant itself to Ra’s al Ghul and the Lazarus Pit but, here, we might be getting a taste of it with some other iconic villains.

The writing from Tom King was astounding. I have been reading another comic series recently that also plays with a non-linear storytelling aspect, and, although it is a good story, the nature of swapping between timelines or settings is jarring; however, within Batman: Killing Time, King has streamlined it with timestamps and easily accessible story structures. Perhaps the title, Killing Time, is a hint towards what is going on here.

The artwork by David Marquez is exceptional. The entrances of each main character are splashed across the page with detail worthy of their names. Batman punches Killer Croc on a full-page spread that oozes energy, Catwoman dances between bullets with effortless grace, and there’s an eerie close-up of the Penguin’s teeth covered in blood from a fresh goldfish he is ingesting.

There’s also a full-pager that shows Batman in flight with the Bat-Signal behind him in a rainy Gotham backdrop—really powerful stuff. As you may be able to tell, I am really hyped for this series and hope the rest of it lives up to the hype of the first issue.