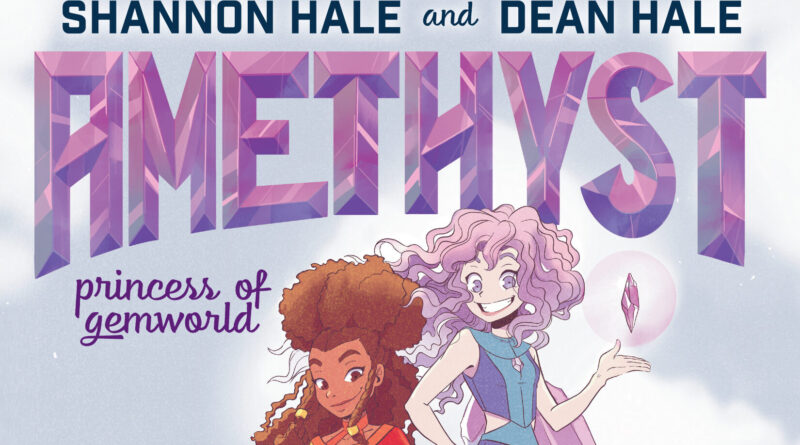 
Amethyst: Princess of Gemworld Preview Images and Details Have Been Revealed

Amaya, Princess of House Amethyst in Gemworld, is something of a troublemaker. She and her brother have great fun together until a magical prank goes much too far and her parents ground her…to Earth! They hope a whole week in the mundane world will teach her that magic is a privilege…and maybe washing dishes by hand will help her realize the palace servants should be respected.

Three years later, Amy has settled into middle school and ordinary life. She doesn’t remember any other home. So when a Prince of the Realm brings her home and restores her magical destiny, how will she cope?

Amethyst: Princess of Gemworld introduces a new generation to a fantastical place and a truly fantastic princess.

Shannon and Dean Hale are the wife-and-husband writing team behind Diana, Princess of the Amazons (illustrated by Victoria Ying), Eisner-nominee Rapunzel’s Revenge (illustrated by Nathan Hale), New York Times best-selling series The Princess in Black (illustrated by LeUyen Pham), and two novels about Marvel’s Squirrel Girl. Shannon Hale is also the author of the Newbery Honor-winning novel Princess Academy, the USA Today best-selling Ever After High series, the graphic novel memoir Best Friends, and others. Shannon and Dean live in Utah with their four children, who are all pretty certain they’re secretly magical royalty from another realm and just forgot.

Asiah Fulmore is a freelance illustrator who currently lives in Columbia, SC with her two dogs, Ali and Ash. She spends her free time reading and loves to travel. If she got the chance to visit Gemworld, she’d hang with House Ruby, because they have the best food, obviously!

Illustrated and colored by Asiah Fulmore

On sale everywhere books are sold 11/9