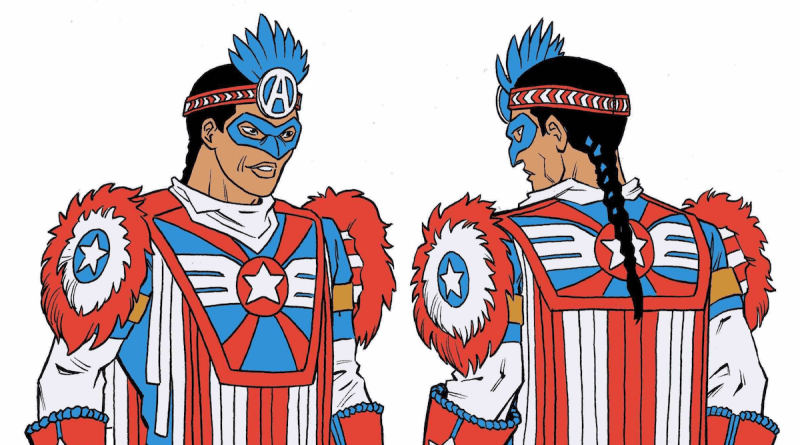 
Judging by the issue’s cover, we have another Sentinel of Liberty! Here we will find out more about Joe Gomez, another Captain America!

Steve Rogers is viewed by the world and us readers as the first Captain America. His bravery and heroism are highlights as a museum chooses to honor the hero. However, his shield is stolen by an imposter. Both Speed Demon and Red Skull’s daughter, Sinthea “Superior” Shmidt are behind this. Their goal is to take out anyone that has ever worn the red, white, and blue suit.

The villainous duo has forced Sam to regain his mantle as Captain; along with having Sam and Steve work together. Another Captain America, Aaron Fisher is introduced and is a heroic team called the Captains Network. Yet, the young man is taken out of commission when he is shot. The Captains plan on reaching to Joe Gomez for his help and to protect him.

Steve and Sam are on the tail of Speed Demon; disguised as Fake Cap. There are riding through Northern New Mexico. During the chase, the pair stop and discuss Kickapoo’s own, Joe Gomez. They know about his reputation as a guy that fixes houses and such for his citizens. Then, they realize that they are chasing Demon and have an idea of who his partner is. There is a recap of Speed Demon’s crimes. For the past two days, the villain has been making a mess wearing Cap’s colors. From taking down an F-16 in South Dakota to injuring many in a 4th of July parade, he is literally untouchable.

The Captains then meet Joe Gomez. Gomez at first is hesitant to use the Captain America name, thinking that it is disrespectful. However, Steve and Sam assure him that anyone can use the name. They then bring up how his life is in danger. Gomez then changes the subject showing off a room his dedicated to honoring Cap. From a vintage WW2 picture to Red Skull’s mugshot, Gomez is a fanboy.

Gomez then talks about how he and Steve knew each other prior. Then continues showing his respect to Steve for fighting not just for America, but everyone. We then see the three Captains talking about a dynamite order. They plan on stopping a potential incident. Gomez then rushes upstairs to put on his suit. The three make it to the middle school, where the explosion is supposed to happen. They then talk about a Governor candidate named Prescott, who is also Native American. As the conversation continues, they are ambushed by a female in an American mask.

The fight goes on as Steve uses his old holographic shield, Gomez uses his traditional and custom shield, and Sam uses a shield with a simple white star on it. Steve takes down the female assailant and discovers that it is Sinthea. While interrogating her, the Captains are attacked by an unknown being.

Steve wakes up, along with Sam and Joe. Gomez then tells the pair that Prescott is speaking today. They roll out with Gomez being injured. In Topeka, Gomez is receiving medical attention. Steve and Sam scope out the speech; keeping eye on Prescott. Sam has a feeling that he is being watched. All of a sudden, Sam is surprised by Speed Demon.

The villain hurdles the shield at Prescott. Out of nowhere, Bucky Barnes makes the recuse. They chase after Demon and Gomez punch him, but he escapes again. Gomez taps out and is en route to the hospital. Hours later, Steve, Bucky, and Sam find out that Prescott dropped out of the race for his safety. Bucky then volunteers his help to stop this mess.

We then get a short story on Joe Gomez and why he became Captain America. First, there is a file from the Captains Network with his information. After, there we are introduced to Gomez going to work with his co-worker, Nikki. They talk about the Wrecking Crew messing up buildings and the Avengers. Gomez at first hated Cap, believing that he only fought for white people. Nikki defends the Man out of Time.

Next, Gomez is doing his job on a crane. Completing his work, Gomez has his lunch and is watching the view. Yet, they witness a member of the Wrecking Crew attempting to ruin a new building. The Juggernaut knockoff attacks the workers, with Nikki trying to stop him with a sledgehammer.

Gomez uses the crane to knock the beast away from Nikki. The monster climbs to Gomez, while our future hero runs on it. Holding a family photo, he ropes himself to the device. He falls, along with the villain, but Gomez is still hanging on. Gomez knows he is next and will be reunited with his parents. At the last second, Captain America catches him.

Steve shows his respect to Gomez, while Nikki teases him. To honor Steve’s legacy and his people, Gomez makes a decision. A week later, Gomez officially becomes a new Captain America. In a later issue, John Walker will join the Captains to apprehended the enemy. We will also be introduced to a new Captain America. The Campus Cap is named Arielle Agbayani.

The writing of both Christopher Cantwell and Darcie Little Badger is enjoyable. I loved the line of Steve saying that the shield was from them. I also enjoyed Gomez’s first conversation with Steve and Sam. Gomez is a pretty cool character. Especially with his origin story at the end of the issue. It made sense to put his story there! From not being a Captain America fan to being a fan and the one to wear his colors with honor. The Native American community has a great hero representing them.

As for the art, Dale Eaglesham, Roberto Poggi, and Matt Milla did a great job! Details always matter and they do not miss. Yet, I personally enjoyed Eaglesman’s art more. Joe Gomez’s suit is fantastic!!! Sticking with his Native American roots and mixing them will Captain America’s colors, is a work of art. Speaking of suits, Steve’s Winter Solider suit makes its return and I loved it! Back to Gomez’s suit, the one-shot was great! However, it was even better with the original Captain America on his left. Only the real ones can say, “I understood that reference.”