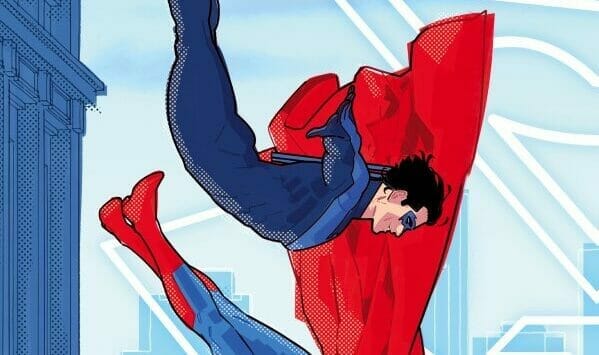 
Can Nightwing help guide the young John Kent to reach his full potential?

The comic starts off with a flashback on Dick Grayson’s first meeting with the young John Kent, AKA Superman’s son. Batman and Nightwing are searching the forest to help find Superman’s son who went missing. They end up near a cave and almost get fried by John’s laser eyes. Batman is confused why the boy would try to attack them but Nightwing takes off both of their masks, saying he must be scared of them.

John is crouched in the cave hugging himself, eyes glowing. Nightwing calms John down. He tells them he works with his dad. Batman calls Superman telling him they found his son. Superman immediately appears. This was really cute seeing how worried he is for his son.

He sees his son, immediately zipping towards him to pull him into an embrace. John starts crying and tells his dad he started flying. He ended up getting lost. Nightwing pulls a lollipop out of Bruce’s belt, giving it to John to try to cheer him up. He asks if John would like to see him juggle something. I really love when writers show the kind side to Nightwing. This was so heartwarming to see him try to cheer John up. During this, Batman gives Superman some really good advice on parenting. How as parents they have to trust their kids to take care of themselves but they will always be there for them when needed.

In the present day, John Kent as the new Superman is at the Fortress of Solitude to ask his holographic father for advice. John tried to stop a monster heading for Metropolis but innocent people ended up dying. The hologram tells him it isn’t his fault. John resents that his dad isn’t here to give him advice himself so he deactivates it. Superman’s robot sees this and goes to Nightwing to tell him Superman’s son needs his guidance. Meanwhile, An old Titan named Risk is getting hunted down by three super-powered individuals. They drown him in the ocean. A rising has begun.

John goes to his boyfriend’s place after his trip to the fortress. His boyfriend Jamie, greets him lovingly. This couple is honestly growing on me. He tells John he has to meet the main investor for his job. He has two masks to hide their identity. They meet on a boat with Richard Grayson. Dick tells Jamie he admires his work. He says that he would love to fund him still but needs more trust between them.

John tells him that Jamie can’t take off his mask because he has too many people that could get hurt. They are interrupted by heroes named Aerie and Wink. They tell them a superhero was found dead in Metropolis Harbor. Nightwing meets Superman at the harbor. Oracle tells them that superheroes are being hunted down by an unknown group. Nightwing teaches John some detective work that leads them to LexCorp.

The artist in this comic book is Bruno Redondo. He’s been the artist for the recent Nightwing series. He does a beautiful job and I really love his art style. The colors are vibrant. The expressions are a standout as well. Especially with the comedic moments. Nightwing looks better than ever here. I really love the amount of detail he puts in his art.

The writer is Tom Taylor, who you can tell really gets these characters. I really love the flashback scene between young John Kent and Nightwing. It was really sweet to see Nightwing cheer up his little brother’s best friend. I also loved how he wrote about Superman’s worry for his son. I missed the moments of Superman being a dad to his child before they aged John to a young adult. John continues to be the kind character that I adore. His writing on Nightwing as a mentor is also great. I can’t wait to read the next issue!