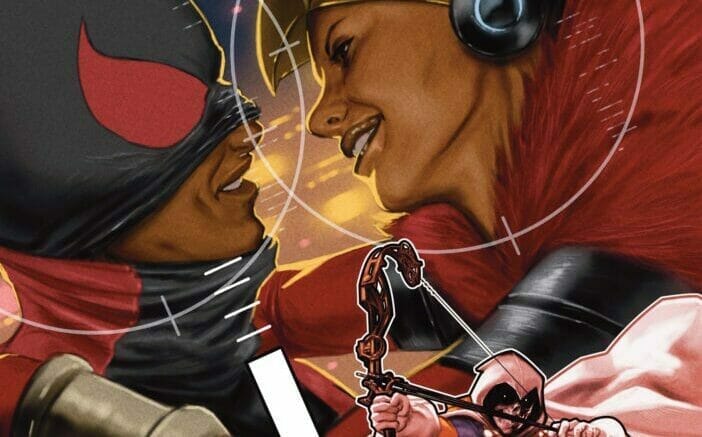 
A date between Miles Morales and Starling ends with the pair being attacked by Taskmaster!

The younger Spider-Man has been dealing with a lot in the last year or so. From Knull’s invasion to the birth of his baby sister and even losing his girlfriend to his best friend. However, he also had to deal with his own clone saga. The Assessor was responsible for making evil copies of Morales. Despite Miles’s victory, he would lose his iconic costume as it was damaged in battle. He would gain a new suit and even a new love interest in Tiana Toomes aka Starling. For those who do not know, she is the granddaughter of Vulture. The Champions find themselves on a rooftop date. Yet, have their alone time squandered by a familiar assassin.

As the two cuddle with pizza, they talk. The cheesy talk starts with them missing out on a film. The costumed heroes bring up the climate and texting in the conversation. However, the two are interrupted by someone shooting an arrow. Miles’s spider-sense goes off and he tells Tiana to get down. Spider-Man is clipped by the arrow.

The duo finds themselves on another rooftop, with Miles believing that this person is after him. After telling the assailant to show himself, Miles is shot at again. An aggravated Starling flies with an injured Spider-Man to escape. This all happens as civilians watch the young heroes fly off. The spider-sense goes off again as an exploding arrow stops them. Once more crashing on another rooftop, Miles demands the perpetrator to show themselves.

Taskmaster reveals himself and is immediately questioned. He is asked by Spider-Man who put a hit on him. The villain replies that he refuses to reveal his employer’s name. He then warns Miles to get Starling out of this fight. Starling then fights back as Miles attempts to cloak himself. Civilians continue to look on as Miles is surprised by Taskmaster’s quick movements. Of course, his photographic memory abilities came in handy.

While the two talk, Miles throws a bioelectric venom hook at Taskmaster. The villain crashes and is told by Miles that he won’t catch him. The thing though is that Taskmaster was never after him. A drone pulls up and sends sonic sounds and blinding lights, taking out the couple. Taskmaster then takes the unconscious body of Starling to the drone, which is actually an aircraft.

Miles yells at Taskmaster, telling him to stop. This does not work. Miles gets back up and webs his way to the aircraft. He is in the air about to make contact with Taskmaster again. However, he is stopped by the assassin when he uses a powerful knife to cut through Miles’s webbing. Spider-Man once again falls and is left defeated.

The writing from Saladin Ahmed was solid! We saw two teenagers having a good time. Referencing normal teenage things like Instagram and texting. Then, when Taskmaster got involved, the writing got better. I loved how he answered Miles’s demand on who was shooting at him and Starling. That was a great metaphor; referring to his face. Plus, this kind of got the sour taste of MCU’s Black Widow (2021) version of the character out of my mouth. Also, the many times Miles has fallen into the issue should pay off by the series’s conclusion. The issue told us that Spider-Man falls, but gets back up. He is likely to dethrone Taskmaster and rescue Starling. The metaphors are on point.

As for the art, it is outstanding! Christopher Allen and GURU-eFX did a great job. Details always matter and there is no sign of the pair missing them. The one-shots of Spider-Man, Starling, and Taskmaster are simply amazing. The explosion and the arrows too. As for Miles’s new suit, it looks nice in the book as well. Personally, I prefer his older suit. Yet, this suit is not a bad representation of the hero, it is a good look.