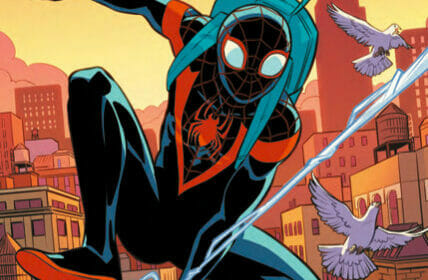 
A critically hated, yet important Spider-Man arc makes its return. Over 20 years ago, Peter Parker interacted with individuals just like him. Miles Morales will be doing the same and it is already tarnishing his reputation as the Webhead.

Miles Morales has been in a rough spot for a while now. He was abducted by a being named Assessor. His kidnapper used him to create clones. He is still dealing with the symbiote invasion. Finally, he is still hurt over the loss of his Uncle Aaron, the Prowler. It has gotten even worse for the young hero. The clones have made their name. With the help of the original Spider-Man, the pair go to work to stop the Assessor from hurting the hero’s legacy.

In his journal, Miles Morales writes about the following events. His parents are consoling as the news shows the clones tearing the city apart. Ganke comes over and is about to explain why he has not seen Miles in a while. They are then interrupted by a news update concerning Spider-Man. Jefferson and Rio aren’t happy to find that Miles vandalized a car. Yet, he does that’s the only thing he did.

He then brings up the Assessor. Ganke volunteers to find more information and follow Miles upstairs. They find that a clone stole Oscorp tech. Miles suits up and sees Ganke’s phone go off with a message. He sees that Miles’s ex, Barbara sent him multiple kiss emojis. Ganke then tells him why he really came. Miles lunges at his friend enraged. However, he soon regrets his actions and goes off.

He expressed in his journal that his actions were wrong. He believes that he could’ve done a lot worse. He then makes it to the lab and is cloaked. He checks on two scientists, one of them being injured and scared of Miles. Confused and senses tingling, Miles is attacked by Peter. He believes that he is fighting off one of Miles’s clones.

Miles is trying to persuade his friend that he’s the real deal. Peter continues swinging, even when Miles is invisible. The younger Spider-Man then hits the older one with a venom-charged punch. Peter then realizes that he was fighting the real Miles. The pair check up on the scientists. One of them reveals that one of the clones had knives.

Soon after, the Spider-Men find themselves chasing down a clone. They confront him and he attacks them. This clone has elasticity and is holding its own. He throws Peter into a wall and slams Miles. There is even no effect on the monster when Miles uses his venom blast. Yet, the pair are able to web up the clone together.

Peter makes a joke, but Miles is not smiling. He threatens to hurt the smiling clone for using his face. Then, Peter steps in to stop Miles from going ham. Miles tells Peter that he knows nothing about his situation. As we all know, Peter does. The elastic clone then disappears after a rainbow mist brief stops our heroes. Miles gets back to action, trying to find his clone.

Citizens are gathered to witness another clone. Miles is attacked by this new clone. This one resembles a literal spider. He is then greeted by Selim, the clone with the knives. This issue ends with our hero at his feet. Although this part ended, there is another Miles story in the issue. Written by Cody Ziglar and illustrated by Natacha Bustos and Rachelle Rosenberg, we see our hero in action in a bonus story.

The title is appropriately called “Big-Time Buzzkill. Miles and Ganke are about to celebrate their friend’s birthday. Miles bought the cake and is going to their place. However, he is attacked by a new villain named The Bumbler. Miles is trying to avoid him, but this lowlife is literally bugging him. He throws honey on Miles and even spears him. In the process, the cake he bought falls and is ruined.

An enraged Miles cloaks, webs, and shocks Bumbler. Now scared, the idiot decides to give up his life of crime. This energy comes after he promised Miles. He also grants Spider-Man a favor. Miles arrives at his friend’s place with a Honeycomb cake. The trio then goes out to play basketball and celebrate. The Bumbler is just walking and takes the previous cake for himself.

Saladin Ahmed did a solid job with writing the story. I liked Miles feeling enraged and doing what he could to stop his rep from being damaged any further. I also liked how it was not the only thing he was dealing with. Especially, with what happened before and during the issue. Finding out that your best friend is dating your ex is a nasty blow.

As for the art, Carmen Carnero and David Curial did a great job! From the detail on Miles Morales and other characters to the single-shot pages. Everything illustrated looked really good. I like how the clones looked, especially the first two. I just hope this story does not extend like the last Clone Saga. Also, I feel like the mini-story at the end was unnecessary. It was not bad, but I thought I was only reading about the new Clone Saga. For the next issue of Miles Morales: Spider-Man, you will have to wait until May 26th.