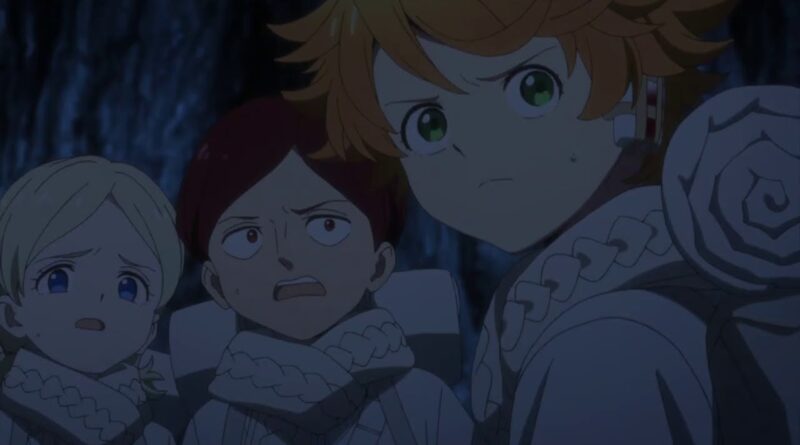 One of 2021’s most highly anticipated anime returns was and is The Promised Neverland. After a stellar debut back in 2019 which led to a rollercoaster ride of emotions especially in the first season’s final episodes; and after a delay due to the ongoing coronavirus pandemic, The Promised Neverland has finally arrived. Emma, Ray, and their escapee group of children now find themselves alone and pretty much defenseless in the forest they escaped into at the end of season one.

The group huddles together and plans on how to find drinkable water and in the process find some food. Emma along with Ray and the rest of the group start reflecting on how much they miss Norman and how Norman wouldn’t be so thrilled to see them so down on themselves for missing him.

For added context, prior to the end of The Promised Neverland Season 1, Norman was shipped off to the demon headquarters but when he arrived there, he was taken introduced to an undisclosed figure in one of the headquarters’ side rooms. It is not yet clear whether or not Norman actually survived this encounter but based on his reaction to who and what he saw when that door opened we can only presume that there’s a 50/50 chance that he might not have survived.

Back at the forest, the group during their reflection for Norman, use the pen he gave them prior to being shipped off. This pen contained a digital map containing the team’s location which helped them pinpoint exactly where in the forest they were located. Additionally, using the books they took from the Grace Field House library, which contains an owl stamp surrounded by a morse code, the group decipher the code to find where they need to go. The group is still hoping to find William Minerva but have yet to pinpoint his location.

On the other side of the forest we meet a group of demons who are hunting down the escapee group as they are vital to the Grace Field House (which was burned down back in season one), but most importantly, are their source of food, and they can’t let good food go to waste. Prior to their inevitable encounter with the group, the group finds themselves being chased by a giant insect.

Ray and Emma split up as Ray wants to trap the insect in a pit. Emma leaves in order to meet up with Don and Gilda and the rest of the group. Just as the giant insect closes in on Ray, the insect is killed by the demons who now have Ray surrounded. Ray tries to make an escape but the demon hounds eventually catch up to him and surround him again. Just as the hounds are about to close in on him, Ray is saved by a mysterious hooded figure.

On the other side of the forest, Emma is now back with the group. Realizing that Ray is taking a little too long to regroup with them, Emma sets out to find him. Unfortunately for her, she faints due to blood loss from her self-inflicted ear injury (she cut her ear off back in season one because all of their ears have trackers and she wanted to fool Isabella during their escape…context!), and a high fever. The group is also met by a strange hooded little girl who guides them to safety.

When Ray comes to, he realizes that he’s in a cave and goes searching to see where he is being held and eventually comes across Emma who is sleeping on the floor. Ray noticed that neither he nor Emma were tied up and were both given water and blankets to stay hydrated and keep warm. They both run into the mysterious hooded little girl who assures them that the rest of the group is safe and are about to be fed.

As they make their way to the rest of the group, Ray asks who was the hooded figure that saved him and why would demons want to save humans and not eat them. It’s a very important question that we, unfortunately, didn’t get an answer to in this episode but it’s an answer we could get next week or in the weeks coming.

The interesting thing for me is, what would be the reasoning for the two demons to be living in the forest and not at the demon headquarters and the obvious question, why did they save Emma, Ray, and the rest of the children who were with them.

The start of The Promised Neverland Season 2 is off to a good start, to say the least, and while the kids may be on the run and trying to not just survive, they’re also looking for William Minerva and through it all, it seems like they have unwillingly found a pair of potential allies. I’m interested in seeing how this potential allegiance develops and the backstory to these two demons and their reasoning for not being part of the demon headquarters.

Of course, there are more questions in regards to Norman, Isabella, and the rest of the children that were left behind but we’ll get those answers this season I’m sure.

The Promised Neverland Season 2 is streaming now on Hulu and Funimation.