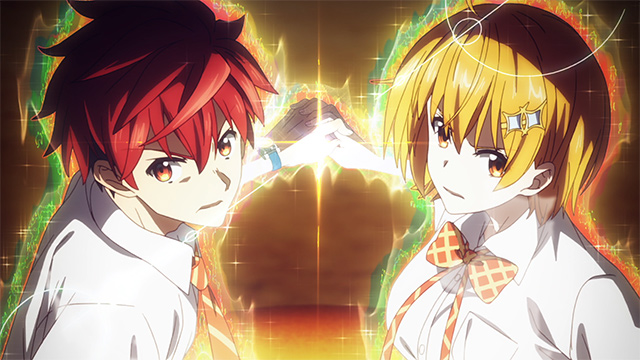 Highschooler Retto Enjo and his HXEROS members fight to maintain peace and teenage sexual energy on Earth with or without their clothes…they are SUPER HXEROS!

SUPER HXEROS is one of the latest anime series to debut on Funimation over the Fourth of July weekend. Announced during FunimationCon 2020, SUPER HXEROS follows highschooler Retro Enjoy and Kirara Hoshino. Two childhood friends who seem to have fallen in love but due to an alien invasion, they have a falling out in their friendship.

Five years have since passed since the first alien invasion and Retto is now trying to rekindle his friendship with Kirara who is now emotionally numb and has avoided contact and almost all interactions with the teenage boys in her school. Seemingly revealing that the first alien invasion caused this change in her. Here is where things get interesting and the episode becomes a fan-service filled anime. While the fan-service is very out there, it is handled in a way where it doesn’t feel overbearing or unnecessary. It’s even hilarious at times especially when we see Retto’s first fight with the censor bug and when he unleashed his HXERO power, he loses his clothes.

For the censor bug itself and its alien friends who have invaded Earth for the past five years. Their goal is to get rid of human emotion and desire, more specifically, human sexual desire and sexual energy otherwise known as “H-Energy” in the anime/manga. We see the alien accomplish this during a concert where the singer’s top unties and her breasts are exposed thus riling up the men in the crowd (sexually of course). This allows the censor bug/alien to suck in all that energy in order to grow stronger. This all happens prior to Retto showing up and fighting the alien/censor bug.

As the episode progresses, Retto tries to rekindle his friendship with Kirara after their incident in the hallway the day prior. Not liking the feeling of being completely ignored, Retto insists on speaking with Kirara and as they walk home from school they are encountered by the alien/censor bug once again. This time the bug is much stronger than before, Retto on the other hand isn’t.

He is attacked by the alien but stands his ground in defending Kirara as the alien wants to steal her H-Energy. Being defenseless, Retto urges Kirara to run away. As he grabs her hand, the same way she grabbed his hand when they were children, she starts to reminisce as the feeling of holding hands becomes all too familiar. While it is not made super clear this episode, I believe Kirara was in love with Retto as much as he was or is still in love with her.

During the earlier parts of the episode we are given hints that something bad happened to Kirara during the opening moments of the episode and during this runaway scene, Retto and Kirara end up hiding where we first met them at the beginning of the episode. After a short exchange, Kirara opens herself up to the feelings she feeling while holding Retto’s hand. It gets real fan service-y here but once again, that’s what this anime is going for and in the anime world, fan service is always a welcomed thing, depending on how its presented of course.

The pair are attacked by the bug once again but this time around Retto is powered up by his own H-Energy and Kirara’s H-Energy, allowing them to land a killing blow thus saving the day. We get some fan service here again and after a small exchange with Retto, the pair are introduced to the remaining SUPER HXEROS.

One of the biggest questions I had throughout the episode that has yet to be answered, which is ok because it’s only the first episode; is that what happens to the H-Energy that is dispersed when the alien is killed? Is it returned to the person it was taken from? Is it even spread out to the world? Like what is the purpose of the glitter and sparkles that appear after killing or at least damaging the alien?

Overall though, this premiere episode was great. Great animation and cool effects when our protagonists are using their powers. Heavy on the fan service which is ok. The make it or break it will be the extent of how the fan service is used. I think the first episode had a good balance but we’ve seen shows like Fire Force overuse it and misfire severely when it comes to those moments. If I have any grip or at least any major concern that would be it. As I said before, its anime and fan service are always welcomed and will always be a thing but there are times where it becomes creepy and just flat out annoying. So we’ll see!

For more on FunimationCon, more exclusive interviews, anime reviews, news, trailers, and updates make sure to keep it locked right here at The Nerdy Basement. While you’re here check out our exclusive interview with Johnny Yong Bosch and Jeannie Tirado and consider supporting us on Patreon.

Although heavy on the fan service, the storyline is worthy enough of a watch. Pair that with great animation and effects and you have a solid anime that has the potential to be great.

Osvaldo MaderaJuly 7, 2020Although heavy on the fan service, the storyline is worthy enough of a watch. Pair that with great animation and effects and you have a solid anime that has the potential to be great.8.0110
Your RatingUser Rating: 0 ( 0 Votes )
Share 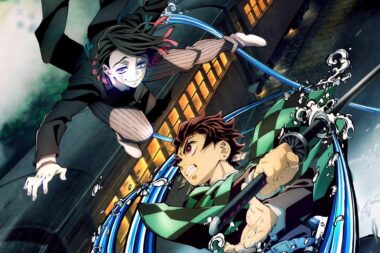