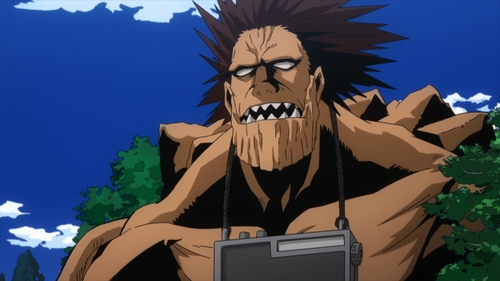 My Hero Academia has officially launched the second arc of this season bringing forth a new opening theme and ending theme and a new villain. While also shifting the focus to other fan-favorite UA students like Bakugo and Todoroki.

After the final battle between Deku and Overhaul, which also led to the death of Sir Nighteye. The entire Hero Association along with the Pro Heroes and students from UA are reeling from the after-effects of that final battle. It’s a hollow victory in every sense of the word. Yes, Eri was saved and Overhaul was defeated, but at what cost? Was it all worth it in the end, when Sir Nighteye meets his end, Lemillion is now quirk-less, and Eri is far from stable and can easily be unhinged due to her not being able to control her quirk. But with each and every episode of My Hero, there’s a lesson to be learned.

No matter how ugly things can be and no matter how hard things can get, we must look ahead, smile and persevere. This is an overarching theme in My Hero Academia dating back to All Might in his prime. Lemillion, despite the loss of both his quirk and his mentor. He has found himself full of energy and hopeful for better days. Something he needs to remind Midoriya to do. Even after Midoriya offers to give Mirio his One For All quirk.

With our main heroes back at the UA dorm and in full recovery mode. Bakugo and Todorki head out to train and test for their provisional hero licenses which will be an interesting aspect to see since they were sidelined for the entire first half of this season. The League of Villains are back on top (not like they ever left) and are once again the biggest threat these heroes will face.

With the debut and inclusion of All For One’s most loyal subordinate, Gigantomachia. The league is an even bigger threat than ever before. Time will tell what was All For One’s endgame the more the series starts to unravel All For One’s contingency plans pre and post his capture…

The Hero Intern Arc while a slow build, was capped off on a high note. Bringing My Hero to its core roots and doubling down on what makes this anime series such fan-favorite and a must-watch series each and every week. Overhaul was great a villain and the first year heroes truly shined in the spotlight. Thus proving not only to themselves but to their mentors and peers that they have what it takes to fight the good fight. It was truly amazing.

As for the new OP and ED themes, I was personally hoping for a real banger from KANA-BOON, been a fan of their music since first being introduced to them back when Naruto was the must-watch anime of the time. But I’m really digging the new ending theme by Ryokuousyoku Syakai.

Feel free to check out the new My Hero Academia Season 4 OP/ED themes below: